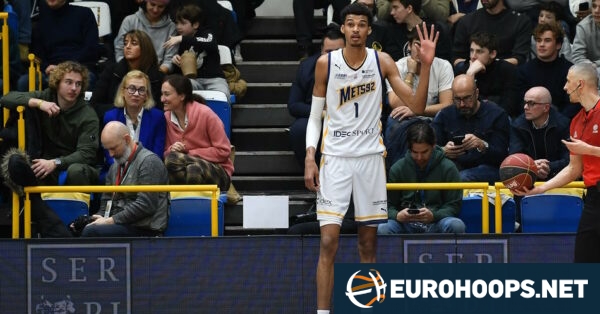 Wembanyama, 19, is on the list of 14 players announced by the French Federation of Basketball, FFBB, Monday.

Earlier action in Group K marked the debut of Wembanyama at the senior level. The frontrunner to be selected first overall in the 2023 NBA draft previously emerged at the 2021 U19 FIBA World Cup and 2019 U16 FIBA European Championship. Upgrading to the senior national team, he averaged 19.5 points, 6.5 rebounds, 1.5 steals, 1.0 blocks, and 1.0 assists per contest. His efforts helped France clinch a berth in the World Cup, before the last international window.

Wembanyama and the rest of the players called up don’t play for Turkish Airlines EuroLeague teams, therefore avoiding well-documented scheduling conflicts. Clubs of the Basketball Champions League and 7DAYS EuroCup are attached to most of the players, while others, including Wembanyama, have focused solely on France’s Betclic Elite LNB Pro A for the 2022-23 season.

Making the most of the ongoing campaign and garnering even more attention, the promising youngster leads France’s top-flight division in points, rebounds, blocks, and efficiency. Packing 21.4 points, 9.4 rebounds, 3.2 blocks, and an efficiency rating of 25.1 per game shape the league highs. He also averaged 2.0 assists and 0.9 steals per game over 18 appearances so far.