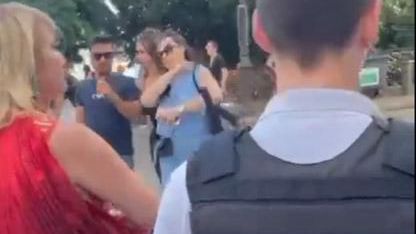 Veronica Antonelli: her hymn to the Sacred Heart did not please the police

Paris: His hymn to the Sacred Heart did not please the police

Opera singer Veronica Antonelli was arrested by the police while she was singing in front of the monument. A prohibited practice, according to French law.

Disenchantment for the singer of enchanted monuments. Véronica Antonelli was performing in front of the Sacré-Coeur church when she was arrested and fined by the Parisian police on Saturday. “We are on the public domain”, defends at first, dumbfounded, the famous soprano, according to images published on social networks.

The Franco-Italian artist, at the origin of the concept “Enchanted Monuments” – sung and commented tours of heritage by means of her voice – is however a regular at artistic performances on the public highway. And the one who has already performed all around the globe had never experienced such a mishap. “It’s the first time it’s happened,” she says, explaining that French law apparently prohibits “singing in front of a monument.”

The intervention of the police caused a strong reaction from Internet users. On Twitter, some, outraged, claim an excess of zeal on the part of the police. But not enough to demoralize the singer, who is pleased that her anthem of the Republic of Montmartre has been followed by thousands of people on the Web.

Singing loudly in the street can also be expensive in Switzerland. A 37-year-old woman from Lausanne had bitter experience of this in 2016, when the police fined her for public disorder. Disputing her plum of 150 francs, she appealed and finally had to pay 500 francs in additional legal costs.