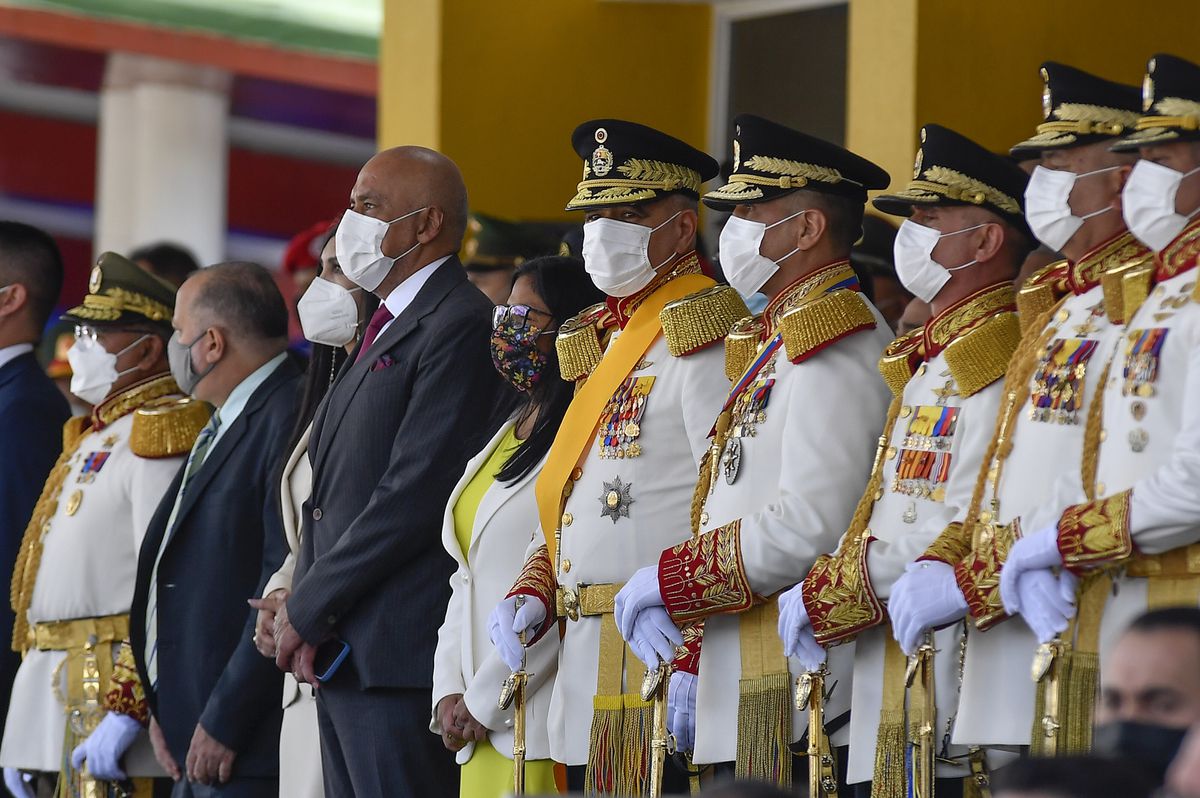 Nicolás Maduro was absent for the second consecutive year from the Venezuelan Independence Day events held on July 5. The military parade, which closes days of officer promotions and protocol acts around the mausoleum of Simón Bolívar, brought together all the components of the National Armed Forces and all the Venezuelan Army’s artillery was exhibited. An inflatable doll of the character Super Mustache, a new animated strip about the Chavista leader launched by official propaganda, replaced the head of state who spoke in a video recorded from the Miraflores Palace and projected on a giant screen on Paseo Los Próceres de Caracas. “As long as there are empires, we are not safe,” the president said in the recording. “I ask the National Armed Forces to remain on maximum alert against the threatening and terrorist plans of the rancid oligarchy.”

The ratification, for the eighth consecutive year, of Vladimir Padrino López as General in Chief, Minister of Defense and a man of Maduro’s absolute personal confidence, has been one of the most relevant aspects of the 211th anniversary of Independence in Venezuela. Padrino López’s eight years as minister and highest military authority in the country make him one of the pillars of the architecture of power of the Bolivarian revolution, and his extensive presence as an active military leader – his term expired a few years ago – constitutes a unprecedented circumstance in contemporary Venezuela. Sanctioned by the United States and Canada, he has been responsible for deepening military cooperation with Russia. He visits Moscow frequently.

In the absence of Maduro, Godfather has led the acts of this Wednesday. “The revolution of July 5, 1811 embarked on a long, arduous road to freedom. We are traveling that path today in the form of the Bolivarian revolution built with the hands of our commander Hugo Chávez, of today’s patriots, of that people who are there, who listen to us, see us, observe us”, he affirmed. “I remember my Commander Chavez exactly 10 years ago, his physical presence here among us when he said, using Bolívar’s words, we have managed to reconquer the most precious asset of the country, which is our independence.”

The narrative of the external enemy has been used recurrently by Maduro in this event in which he has once again inflamed tensions with Colombia in the midst of a change of government, after the historic victory of the left-wing candidate Gustavo Petro. “In his impotence, in his hatred and in his defeat, Iván Duque wants to take revenge on Venezuela, so keep your guard up,” Maduro asked the military during an act of promotion of 15,150 officers and professional troops, which is done regularly. as a prelude to the celebration of Independence.

Among those promoted, 162 became generals and soldiers, a figure that has been over a hundred in the last three years, and in the last decade there are more than 1,2000, a number considered high for the size of the National Armed Forces. according to Citizen Control, an organization that monitors the military sector. A strategy, analysts point out, to bind loyalties. They are also Godfather’s generals.

Under the command of Padrino, following orders from Maduro, they have been able to crystallize the foundations of the country’s new military thought, which flies Chavista flags and expressly evades the mandates of the 1999 Constitution, inspired by the anti-imperialist doctrine. Also, the implementation of the so-called Civic-Military Union, present as a principle in the first proclamations of Hugo Chávez, which has given rise, under his command, to the creation of the Bolivarian National Militia as the fifth armed component and sentinel of the revolutionary hegemony as an extra-electoral circumstance.

For many people, the most serious obstacle that the democratic forces have encountered to restore the principle of political alternation in Venezuela, expressed in the crises of 2014, 2017 and 2019, has been the resolute attitude of Padrino and the Armed Forces in the defense of the status quo. Padrino has managed to impose, as definitive, the narrative of the Bolivarian National Armed Forces as a “revolutionary, Bolivarian, Zamorano, anti-oligarchic and radically Chavista” body.

Trained as a soldier in the governments of democracy, as Infante of the Army -graduated from the Juan Gómez Mireles promotion, in 1984-, the calculated neutral and allegedly institutional tone that Padrino developed in his proclamations, made him famous as a depoliticized professional and devoted to his constitutional functions in the first changes of his administration.

An important part of civil society spent some time calling on him in public to assume his constitutional duties in the event that Chavismo lost a presidential election. The electoral victory of the opposition in the 2015 parliamentary elections – which broke a taboo and was a serious test for the revolutionary power – took place with his consent and his presence at the swearing-in of the new opposition leadership.

“He was always a good soldier,” recalls Antonio Rivero, one of his classmates, an Army general now in exile. “A disciplined man, who fulfilled his role, adapted to the restrictions imposed by discipline, good companion. He was strict, but fair treatment, he was not a despotic person. ”

Born in Caracas, 59 years old, married with two children, Padrino, one of the first in his class, took specialization courses at the School of the Americas in the United States in the 1990s, and stayed away for a while. of the turbulence that gave rise to the birth of Chavismo at the beginning of this century. His conversion to Chavismo, according to the sources, took place progressively, “around the year 2008″, according to a person who knew him at the time. Padrino had a very close and frequent relationship with Hugo Chávez while he was stationed in Barinas; He accompanied him personally when he had health complications, and they ended up forging a close friendship.

“He had no training as a man of the left, nor links to politics. He was promoted by his military merits. When Chávez comes to power, his relations come to light, especially with Miguel Rodríguez Torres – Maduro’s former Minister of the Interior, today on trial for military rebellion, of whom he was a great personal friend, ”says General Rivero.

“I shared with him concerns in private about the authoritarian and anti-institutional drift that I saw in Chávez,” says Rivero. “For a while we agreed, then I spent a lot of time without seeing him. Concerned with the control of the Cubans over the key sectors of the military world, with a military trial raised against it, I sent him several messages, around 2011, expressing my concern. His response was, ‘Antonio, I’ve been talking about socialism for too long. I can’t back down.”

Some analysts, such as the journalist Sebastiana Barráez, argue that the extension of Maduro’s mandate to Padrino has to do with the difficulty of replacing him. He is a respected superior in the military world, according to sources, who has managed to contain the internal unrest of these years. His critics criticize him for the anarchy of the mining areas, the distortion of the Republic Plan that guards the votes that made Maduro’s re-election possible in 2018, the tolerant attitude towards the Colombian guerrillas and, in general, the absence of state control in some areas of the country thanks to the growth of organized crime and drug trafficking.