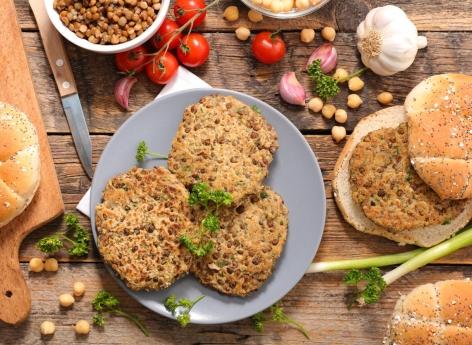 “Vegetable meat” is healthier and greener than meat from animals

Because, unlike real meat from slaughtered animals, these alternatives are much healthier and more sustainable, reveals an article published in the journal Future Foods.

According to its authors, food “specifically formulated to replicate the taste, texture and overall eating experience of animal products” are a much more effective way to reduce meat and dairy consumption than encouraging people to cook vegetarian whole foods.

To reach this conclusion, the authors compiled the results of 43 studies focusing on these plant foods. Some focus on their impact on health and the environment, others on consumer habits. A study that is part of the corpus shows, for example, that almost 90% of consumers who consume meat and dairy products of plant origin are in fact meat eaters or flexitarians. Another found that plant-based products similar in taste, texture and price to processed meat had the best chance of replacing meat.

Among the benefits highlighted in the studies, that of much lower greenhouse gas emissions for plant products than for the animal products they replaced. According to one article, replacing 5% of German beef consumption with pea protein could reduce CO2 emissions by eight million tonnes per year. Another study shows that, compared to beef-based burgers, plant-based burgers were associated with a 98% reduction in greenhouse gas emissions.

According to the report’s authors, plant-based products generally require much less agricultural land, need less water and are less polluting than animal products.

Plant-based steaks, allies of our health

In addition, several studies present in the corpus show that steaks and other products of vegetable origin have a better nutritional profile than products of animal origin. A study found that 40% of conventional meat products were rated as ‘less healthy’, compared to just 14% of plant-based products, according to the UK Nutrient Profiling Model.

Other studies have shown that plant-based meat and dairy products are good for weight loss and building muscle mass, and can be used to help people with specific health conditions, in particular because it was possible to add “super ingredients” such as micro-algae or mushrooms, rich in vitamins, amino acids and antioxidants.

It now remains to convince consumers to prefer these vegetable alternatives to meat products. For this, three essential elements will have to be taken into account, according to the authors of the article: taste, price and convenience.

See also  how to lose a size in just 2 days