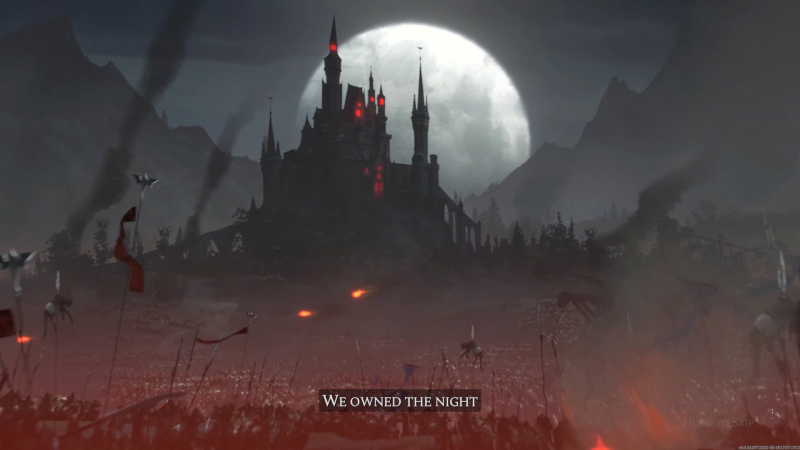 V Rising – from the coffin to riches. Preview / Games

Stunlock Studios has a special approach to development: the studio takes a trendy genre direction and rethinks its typical mechanics from a non-trivial point of view. So, in the middle of the last decade, the team was marked by an attempt to combine the MOBA genre and the well-known zombie universe in the Dead Island Epidemic project. It turned out remarkable, but, alas, the project was closed without leaving the “beta”. Then Stunlock released the online isometric action arena Battlerite, after which, within the same world, she tried to enter the territory of the royal battles with Battlerite Royale. In each project of the studio, an original approach is really felt, but it is also clearly felt that for such a coveted mass character, its games lack much. However, when looking at V Rising, it becomes obvious: the experience was taken into account.

The hand-drawn screensaver plunges into the initial events of the sinister and merciless world. But the fact that vampires are also lumberjacks, artisans and interior designers does not say a word!

⇡#The vampire has no goal, only craft

Once upon a time, vampires were the masters of the world, reveling in their almost limitless power. However, the people, tired of the fanged tyranny, raised the bloody masters on the pitchforks, forcing the surviving bloodsuckers to go into the shadows for many, many years. But now the vampires are again ready to fight for the right to dominate the food chain, which means that it is time to move the coffin lid (of course, from the inside) and triumphantly return to the mortal world. And for starters, it would be nice to find a cozy place for the residence.

The first building in our still conditional stronghold will be the heart of the castle, which, like us, feeds on the blood of our fallen enemies. Or rather, blood essence, one of dozens of resources that can be found in the world of V Rising. The more it is in the heart of the castle, the wider our possibilities – our house will literally be able to occupy a larger area.

When the heart of the castle beats, it will not be superfluous to take care of your own comfort. For example, by installing a coffin in which it will be possible to wait out a deadly sunny day. Another important element of decoration is the chests where you can store the extracted valuables. And since we are beginning to gain some kind of capital, then enclosing our possessions with walls seems like a sound idea to the wave. To begin with, you can limit yourself to a simple wooden palisade – even if the feeling of beauty will not be satisfied, but we will hide our goodness from the curious eyes of the inhabitants of the server. 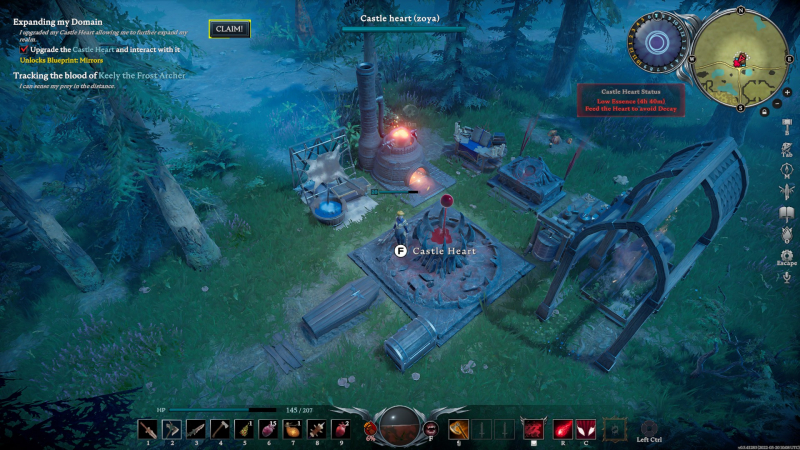 But to make our residence look not like a dilapidated barn, but like a domain corresponding to the status of a formidable lord of mortals, we will have to work. After all, if simple wood or stone, which are literally nearby, is suitable for basic interior objects – it’s enough to beat the sources of resources, then more complex production processes are provided for the more important and functional elements of our castle. For example, for strong (and, most importantly, presentable) stone walls, brick blocks and processed boards will be required. Raw material is converted into such products in various crushers, sawmills and furnaces. Of course, the further we go in the development of the stronghold, the more refined materials we will need and the more various devices we have to build.

And we must not forget that someone (also us) will also have to extract valuable raw materials for our estate. Before going out into the world, it is worth acquiring high-quality equipment by collecting something digestible for a hike on a work bench. For different locations and against different opponents, the concepts of “quality” and “digestible”, of course, vary. For some of the adversaries, a couple of blows with a dilapidated bone mace are enough, while someone will hardly feel the crushing flurry of blows with a strong copper sword. By the way, a weapon of more skillful work not only enhances the attack, but also unlocks additional active skills – for example, a large-radius scissor strike or a steel whirlwind. 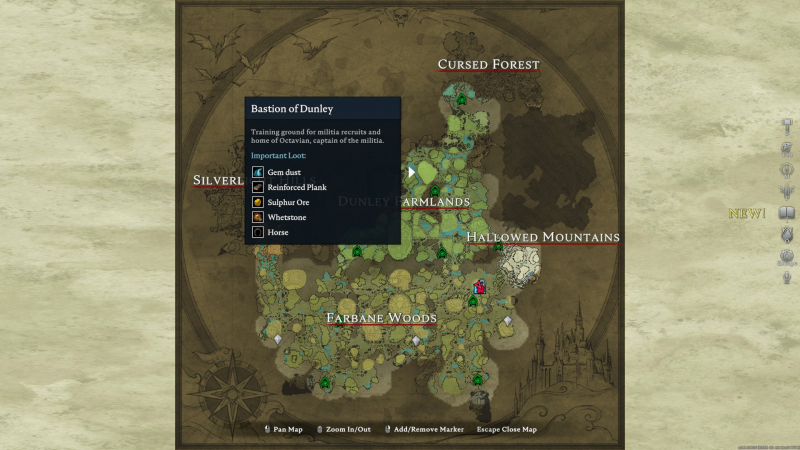 By hovering over a certain area, we will see what can be mined in this zone. A trifle, but convenient

Picking tiles, decorating walls, arranging workbenches, and smelting weapons to your liking is certainly insanely exciting, but it’s still pretty typical of the genre. But where V Rising really captivates with originality is in the embodiment of the entourage of vampire everyday life.

For example, in the mechanics of draining our victims. You can use almost any inhabitant of these lands. And what features we get will depend on who we replenish our blood supply (required to maintain life and use various abilities). Having tasted the robber, we will increase the chance of critical damage and movement speed; having tasted the animal, we will get increased protection and accelerated regeneration; and having a meal with a tough fighter, we will get additional attack speed and an increased indicator of theft of life. The resulting effects are affected by the quality of the blood of our dinner (randomly varies from one to one hundred percent). 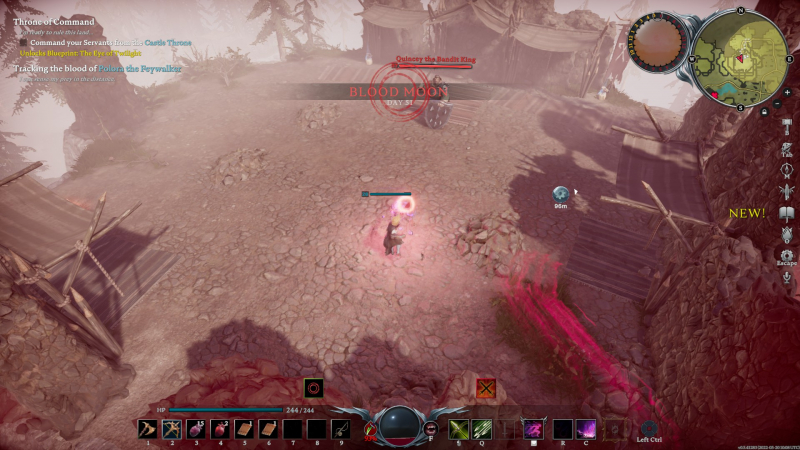 From time to time, the Blood Moon reigns in the sky, giving vampires additional agility and increased bonuses from blood effects

But the main dish here is the carriers of V-blood, in fact, the bosses. To hunt for a valuable delicacy, you need to build a bloody altar in your estate, which will open up an extensive menu for us. After choosing a dish to taste (and according to the level of equipment), you can begin to track down a tasty NPC, moving towards the visualized smell of prey. I note that the fights with carriers are quite severe and it is far from always possible to refresh yourself the first time. Sometimes you have to retreat in order to prepare for the attack better. The success of the skirmish depends on many factors – not only the reaction speed of the player or the quality of the equipment, but also the active skills chosen and the active blood effects.

Having defeated a mighty enemy and, of course, drained to the bottom, we open up new horizons of development. Someone will drop out new recipes for weapons or components, other defeated enemies will “grant” us blueprints for machines, smelters and other elements of vampire life. But most importantly, by drinking the carrier of V-blood, we will unlock new abilities that will give us additional advantages and significantly diversify the game.

Magic skills fall into several categories – blood, chaos, illusion, ice, and unholy divination. Each discipline provides a variety of attacking and defensive options that can be combined as you like within the two active slots. There is also a separate cell for the skill of teleportation, also with a touch of one of the witchcraft schools. And, of course, how to do without an absolute ability that will help you triumphantly get out of the hottest situations.

Chaos magic is a pertinent argument in any confrontation

In addition to combat magic, V Rising also has a different kind of spell – vampire! All of them are available at the same time, without restrictions on slots: the player can at any time restore shaken health, subjugate an almost defeated enemy to his will (he can also be brought to the residence and made his minion by providing a personal coffin) or, for example, turn into a wolf or bear by acquiring the corresponding increase in characteristics. And you can also go into the form of a person, having received an invaluable ability of socialization – soldiers and hunters will not rush at us with torches, peasants will not run away screaming, and, for example, it will even be possible to bargain with wandering businessmen.

Stunlock Studios has remained true to its credo. V Rising is her trademark non-trivial look at the familiar genre. However, this time the team managed to make not just an original, but an incredibly addictive and diverse project. It is noticeable how painstakingly the developers approached the creation of a living world – it is full of events and exists according to its own laws. Humans and beasts fight on dusty roads, lycanthropes storm peasant farms under thick cover of night, and ancients clash with V-blood carriers in the thickets of forests. And all this does not necessarily happen in front of our eyes, sometimes we are only faced with the consequences of a grandiose massacre (maybe arranged by other players), along the way collecting easy loot. Any of our little skirmishes can end in a grandiose massacre with an unobvious outcome. Add to this celebration of constant and unpredictable adventure the almost childish delight of a successful sortie for valuable ore, or the incredible satisfaction of creating a powerful new sword, or the boundless joy of defeating a powerful boss, and it becomes clear how V Rising was able to win the hearts of a million players so quickly. .

If everything is so exciting already in Early Access, then what will happen to the full release? Looking forward to.

If you notice an error, select it with the mouse and press CTRL+ENTER.