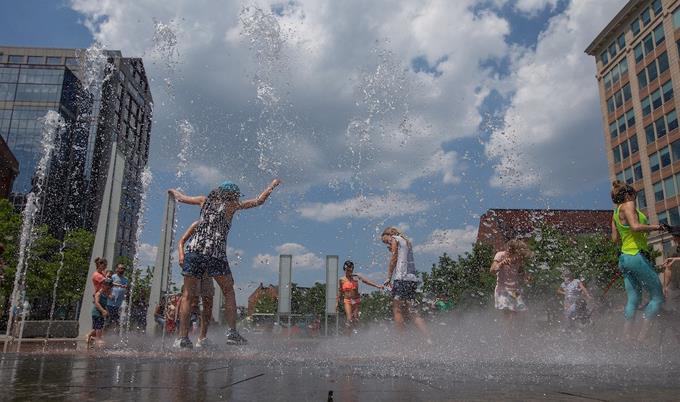 The National Weather Service (NWS) of the United States forecast this Tuesday “dangerous heats and unprecedented high temperatures” for this week, from the Midwest and the Great Lakes to the Southeast of the country, in the beginning of summer in the country.

And this is just the beginning, warned meteorologists, who expect temperatures for the rest of the summer months to be above average in much of the country, especially in the center and east.

Unprecedented high temperatures were recorded on Monday in cities in the central United States, as well as in Houston, Galveston and Victoria (Texas). And in St. Cloud, Missouri, the mark on the thermometer surpassed its previous record with 38.3 degrees Celsius (191 Fahrenheit).

This morning alerts for high temperatures have been issued in regions where more than 20 million people live, from the center of the country to the state of California, on the west coast.

For today, Tuesday, meteorologists forecast maximum temperatures of 29 Celsius (85 F) in north and central Texas, Arkansas, Louisiana and Mississippi, and above 27 Celsius (80 F) in Oklahoma, Kansas and Missouri, and in the west in southern California and in Arizona.

Forecasters have forecast highs between 35 and 38 Celsius from Chicago to Detroit.

Since last weekend, the highest temperatures have been recorded in Fargo and Grand Forks (North Dakota), Sisseton (South Dakota) and Minneapolis and St. Cloud (Minnesota), where for the first time since 2018 the mark was exceeded 38 Celsius (100 F).

For tomorrow, Wednesday, the most intense heat wave is expected to move to the southeast, with a high percentage of humidity, mainly affecting Florida, Alabama, South Carolina and Georgia.

Forecasters forecast that in Macon and Albany, both in Georgia, the thermometer will hit 104 Fahrenheit (40 degrees Celsius) on Wednesday, the highest temperature recorded there since 101 F (38 C) in 1925.

For their part, the 6 million residents of Atlanta (Georgia) will endure 37 Celsius (100 Fahrenheit) during Wednesday and Thursday, the same as the inhabitants of Huntsville and Birmingham, Alabama.