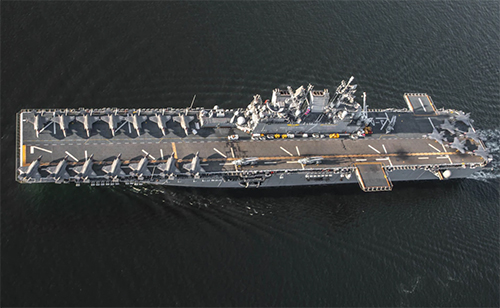 During the first half of June, the US Navy’s amphibious landing ship USS Tripoli took to the sea in the role of a light aircraft carrier. The deployment of the USS Tripoli in this role was part of the Valiant Shield military exercise, which was held at various locations in the Pacific Ocean.

USS Tripoli, the second America-class ship. These ships are 257 meters long and have a displacement of 45,000 tons. That is comparable to the French carrier FS Charles de Gaulle. (Photo: US Navy)

USS Tripoli started the exercise from the Japanese naval base in Sasebo where the ship arrived on June 7th was spotted† Her normal component of helicopters and transport aircraft had been replaced by a squadron of F-35B ‘lightning’ fighters from the VMFA-121 battle group of the US Marine Corps. In this configuration, it is referred to as a ‘lightning’ aircraft carrier, in reference to the nickname of the F-35B fighter.

The F-35B is the only aircraft in the US Navy that is capable of serving from amphibious landing ships. The relatively small flight deck does not allow to install catapults on which other types of aircraft can be used. However, due to the need to take off vertically, there is a reduction in combat power. An F-35B is not capable of carrying as many weapons as an F-18 Hornet fighter on full-fledged aircraft carriers.

F-35B aircraft of the US Marine Fighter Attack Squadron (VMFA) 121 from Japan, on the flight deck of the Tripoli in mid-June. (Photo: US Navy)

Conceptual deployment – independent or supporting role
Light aircraft carriers can be deployed in an independent role to provide air support to amphibious operations. In this operational deployment, the US Marine Corps could achieve complete independence in conducting amphibious operations. The main role would then be to bombard land targets in preparation for and during the amphibious landing, as well as to independently provide an air patrol above the amphibious squadron. The larger aircraft carriers can therefore be relieved of these roles and focus on other tasks, such as providing air support against targets further inland or directly confronting the enemy air force.

The monthly newsletter of MarineShips.nl

Read more about the content of the newsletter here

Operational deployment
US naval operations in the Western Pacific must increasingly take into account the presence of ever-expanding Chinese weapon systems. Like the Soviet Union, China has a strong focus on neutralizing American carriers operating on the periphery of mainland China. For example, China continues to carry out tests on targeting aircraft carriers with ballistic missiles. With ‘only’ 11 aircraft carriers in service, half of which are on average operational, the loss of one carrier is an immediate huge blow to the combat capabilities of the US Navy.

A major drawback of deploying an amphibious landing craft in the role of a light aircraft carrier is the loss of deck space for helicopter operations. A light aircraft carrier would therefore have a greatly reduced or completely absent ability to carry out landings of airmobile troops through the air. This setup appears to conflict with the desires of the US Marine Corps to transform itself into an organization specialized in conducting short but powerful amphibious raids in the Pacific theater.