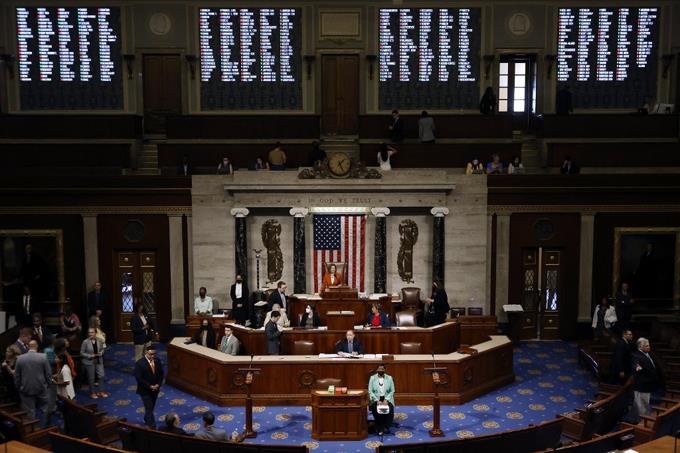 US Congress passes the most important gun control law in decades

The United States Congress broke on Friday. a three-decade stalemate in passing a gun control lawless than 24 hours after the Supreme Court reaffirmed the right to carry it in public.

Gun regulation is a topic of reference in the United Statesfor both conservatives and liberals, even more so in times when mass shootings are commonplace.

The House of Representatives, with a Democratic majority, voted in favor of the law that had already been adopted on Thursday night by the Senate and that, although modest, represents the first important attempt to regulate firearms since 1994.

Fourteen Republicans challenged the leader of their caucus Kevin McCarthy by approving the 80-page text together with the Democratic ruling party.

In the upper house, where projects usually die due to lack of majorities15 senators voted alongside the 50 Democrats.

The parliamentary vote came hours after the Supreme Court’s conservative majority struck down a century-old New York law that required permits to carry firearms in public.

The controversial issue of gun control was reignited by two massacres that took place in May, one in Buffalo, New York, which left 10 African-Americans dead, and the other in Uvalde, Texas, with 31 fatalities, including 19 children.

The high court’s ruling had been hailed by gun rights activists.but the vote in Congress took the shine off his celebration.

The Liberals themselves welcomed the passage of the new rule, despite their disappointment at the limited scope of the provisions, which omit any ban on semi-automatic weapons or high-capacity magazines.

Although it does not meet his expectations, President Joe Biden considered the law a step forward after almost 30 years of unsuccessful efforts in Congress.

“This bipartisan law will help protect Americans”Biden said in a statement shortly after the Senate vote. “Children in schools and communities will be safer because of it.”

Meanwhile, the Supreme Court’s ruling caused unease among anti-gun activists, but was applauded by Republicans and the National Rifle Association (NRA), the powerful firearms lobbyist.

“This decision unequivocally validates the NRA’s position and should be a warning to lawmakers: no law that affects individual liberties should be passed,” said Wayne LaPierre, NRA Executive Vice President.

Eric Tirschwell, chief trial attorney for Everytown Law, a nonprofit organization, said the Supreme Court misapplied fundamental constitutional principles, adding that his group was “ready to go to court” to defend restrictions on the carrying of weapons.