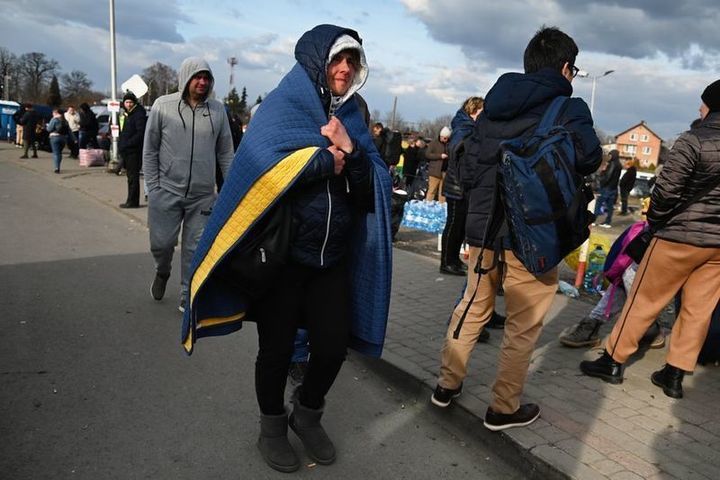 Ukrainian refugees keep the inhabitants of the Baltics in fear: cunning and aggressive

The Baltics are seriously disappointed in those whom they have “tamed”, and no longer want to be responsible for them. We have to reap the fruits of the migration policy already now. In the center of Riga, a crowd of Ukrainian refugees frightened the locals by banging on pots, howling and growling like an animal. A creepy concert in social networks was dubbed demoniac, advising the participants to call a good exorcist. In Tallinn, shouts of “Glory to Ukraine!” are periodically heard on the city streets. and walls, monuments and structures painted in the colors beloved by Ukrainians appear. As in Moldova, the citizens of the Baltics are trying to reason with strangers with video messages. So far, to no avail.

The record holder for the number of refugees received was Poland, with which Ukraine has more than 500 kilometers of a common border. According to the UN, 2.3 million people entered the country, almost 40,000 to Lithuania, and 11,000 to Latvia. Many refugees use the Baltics as a transit zone to reach the coveted countries of Europe. For example, in Germany or France. Those who remained consider themselves not guests, but kings of life. For example, they allow themselves to raise their hands against those who dare to speak to them in a language other than Ukrainian.

“We have refugees from Ukraine, and there are moments when they behave very aggressively, mainly towards women and the elderly,” a Latvian resident is indignant on the video. understood in Latvian, and he addressed them in Russian. I turned because they shouted “Glory to Ukraine!” and scared the child. Another point – we recently had a girl say that she was walking with her son and spoke in Russian on the phone. They ran up to her – “Glory to Ukraine!” and sprayed pepper spray in the boy’s face. They took the money and scattered things along the street. Our authorities are doing nothing about it, so I ask the men of Latvia and Riga. We need support to break Ukrainians who touch our people. We will fight for our people.”

See also  a scientist tells it in the first person

It is worth noting that until quite recently, the inhabitants of Latvia had a completely different idea of ​​the appearance of a refugee on their territory. They hoped that the forced guests would immediately get involved in the work, and they would look for it not in the capital “so as not to take away jobs from the locals”, but in rural areas. “Cesis, Cesvaine, Smiltene. Kurzeme is a chic area too, insanely quiet. Workers are needed and often pay well and formally. In the regions, private ownership is more common. It is one thing to offer housing for a fee or free of charge in feeding places, not knowing how many people will come, and the owners, in principle, do not agree to keep a refugee for a long time. Another thing is farm work. Theirs don’t go. None of the locals need work on a farm with the provision of housing, since they still have to pay for their own housing. We have a big problem with this in Latvia. And the farmers have housing. I worked in the central market for a long time. It is difficult to find a decent person on the farm during the season. No one will leave the city, and people from the regions will work abroad. IDPs, especially now, benefit from this,” – this is how Latvians recently planned the future of Ukrainian refugees. Alas, everything turned out exactly the opposite.

One of the Russian-speaking residents of Latvia told Moskovsky Komsomolets about the behavior of Ukrainians and what tricks they use to earn a living in foreign countries.

– More than half of them, to put it mildly, are bad people. For example, those who rented their apartments for a lot of money to their own, who fled from hostilities, but went to Europe themselves. They also tour. We received help in Poland – we went to Germany, from there even further. Refugee status is not issued anywhere, they just come for benefits.

– Are new refugees expected to arrive in Latvia?

– We are moaning, but we are waiting for a new party, 23 thousand people. They say they will now be placed in social facilities – churches, schools.

– How do they behave with you?

– They are cunning. Residents of many EU countries began to complain that people come to them and download rights, just like at home. I do not mean those who really found themselves without a home, lost their relatives. I’m talking about the majority who just went to Europe for free for a better life and hide from military service.

How is safety on the streets now?

– I don’t leave the house alone. There was a video where a Russian girl who has been living in Poland for a long time was settled by refugee neighbors. So this neighbor called her and threatened that she would take her job as a teacher. And then he will catch her Russian children and kill her.

In Estonia, a former security official expressed outrage at the refugees, warning that if they do not change their behavior, their fate can be compared to a salad: “I appeal to all Ukrainians: And to those who live long, and to those who have just arrived to us . You know, before the New Year we always prepare salads. Now chaos is happening in the world and in Estonia – wherever you look, Ukrainian flags are everywhere. It feels like we live in the Ukrainian region. Our people are quite good-natured, we have opened our hearts, our doors to you. We share with you at the expense of our children and the elderly. There is a saying – “one does not go to a foreign church with their charter.” And I ask you, as a former law enforcement officer of the Republic of Estonia, behave normally, behave peacefully and quietly. So that you are not later turned into this Olivier salad. Stay human. Without shouting and offensive words like “Moskal”. In Estonia, human laws and there is only one flag – the flag of our beloved Estonia.

Other residents of Estonia also complain about the excessive abundance of Ukrainian flags and the impact of this fact on the behavior of guests:

So my family in Tartu went to a restaurant on the Town Hall. Look – 7 flags of Ukraine and 1 Estonia, even our city does not have a flag!!! Can you explain where the flag of our city and Europe is? So far I have not found an answer, but Ukraine is everywhere! I sympathize with Ukraine, but guys, am I still in Estonia or …?

Russian-speaking citizens are outraged by the unequal state of affairs and they warn of the possible most negative consequences of the current situation: “I am a Russian speaker, but I was born in Estonia, and this is my country, don’t you value us, Estonia, close our schools, are refugees from Ukraine really more important native Russians? We work and pay taxes, why do I, who was born on this earth, have less rights than alien people? There are about 30% Russians in Estonia and you can turn them against the Estonians who are our friends! For what? They arrived in a small country where their problems are above the roof. They won’t work, they won’t learn the language, 90 percent, and then you won’t be kicked out. I understand Ukrainians, I don’t understand Estonia, although we boil for anyone if he is against Russia.”

But one should not think that it is the Russian-speaking inhabitants of the Baltic states who have claims against refugees. For example, in Poland, locals are also very annoyed, they are outraged by the gastronomic claims of Ukrainians. Poles complain about their excessive pickiness to food, which is prepared free of charge for visitors by locals. Here is how one of the girls expresses her indignation: “I want to appeal to the guys who crossed the border and are in Poland, whom the Poles help with clothes and housing. And you have the conscience to say that they cook too fatty or unsalted meat for you, do not bring headphones for the iPhone. Are you seriously? Please be human.”