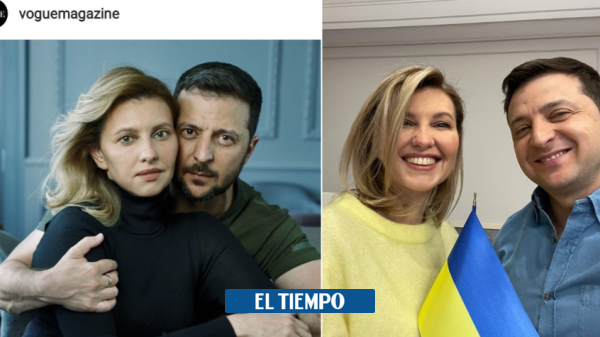 Ukraine: Zelenski and his wife pose for Vogue and cause controversy – Europe – International

Volodimir Zelenski, President of Ukraine, and his wife Olena Zelenska, posed in a controversial photo session for Vogue magazine, one of the most important in the world of fashion, in the midst of the war it has faced against Russia since February of this year.

I am not an expert in anything nor am I #Ukraine but these photos seem frivolous and out of place. Several thousand people have died and so many others suffering from the war for the president to pose romanticizing the image of the hero he has and is not. #Vogue #Zelensky pic.twitter.com/1YhYuC4dDS

The photo shoot for the article “Portrait of Bravery: Ukraine’s First Lady Olena Zelenska” was held in kyiv, where they discussed “life in wartime, their marriage and shared history, and dreams for the future”. future of Ukraine,” Vogue shared in a post on Instagram.

In fact, the Ukrainian Ministry of Defense shared one of the photos on its social networks with the post “Pain, courage… and determination to win.”

And the first lady of Ukraine shows us that the war (latest model) is not an impediment to modeling for Vogue, after all the funds do not raise themselves, that is if they already said that the Eurovision Song Contest will not be held there anymore It would be like too much right?🤔🙈🤦🤦 pic.twitter.com/ykL9HKa5yl

However, the photos, taken by famed photographer Annie Leibovitz, were described as shocking and frivolous and several stated that this was neither the time nor the place for such a session.

“Ukraine in the middle of a war, a brutal invasion, occupation, or whatever the media calls it, and President Zelensky and his wife pose for Vogue magazine,” said one user on social media.

“The people of Ukraine die in an unjust war, while their president Zelensky and his wife, Olena Zelenska, pose for #Vogue magazine. What an obscenity, what a shame,” added another Internet user.

(You may be interested in: Japan: the knife massacre for which a man was executed by hanging)

Zelenska wore outfits by Ukrainian designers for the controversial shoot, held in locations such as the ruins of the kyiv airport and the official residence, which appears to be guarded by the military and sandbag trenches.

The article, in addition to being available in its digital version of Vogue, will also be included in the October edition of the print magazine.

Annie Leibovitz photographing the Zelenskys for Vogue. As much as it serves to “reach more people”, I do not think that the Hollywoodization of the tragedy that Ukraine is experiencing wins with that, but rather trivializes it as a disposable consumer product. I think.pic.twitter.com/VF3EHSubvg

In the interview with First Lady Olena Zelenska, the woman commented that moving into the spotlight since taking office as First Lady has “been difficult.”

In addition, she says that she and the president of Ukraine, Volodimir Zelensky, met in high school, began dating in college and had a full life in the world of entertainment before Zelensky won the presidency in 2019.

Regarding the role of Olena Zelenska in the conflict, Vogue points out that “she has increasingly turned to front-line diplomacy” and they refer to the trip she made to Washington, although in an unofficial and unannounced visit, in the who met with President Biden, with his wife Jill Biden, and Secretary of State Antony Blinken.

There, she also addressed Congress, telling a bipartisan group of lawmakers that she was speaking as mother and daughter, not just first lady.

(Keep reading: The jacket worn on man’s first trip to the Moon is auctioned at a record price)

“We have no doubt we will prevail.” As the war in Ukraine enters a critical new phase, the country’s First Lady, Olena Zelenska, has become a key player—a frontline diplomat and the face of her nation’s emotional toll. https://t.co/DCXWYnzAsK pic.twitter.com/wcaY5IFGHf

I am asking for something I would never want to ask for: I am asking for weapons, weapons that would not be used to wage war on someone else’s land, but to protect one’s home and the right to wake up alive in that home. .

Finally, Vogue highlighted that Olena Zelenska has an important role as first lady: to be “a beacon for her citizenry and an actor in Ukraine’s battle for hearts and minds.”

Chile: they will investigate the Government for ‘interventionism’ in the constituent process

Does New Zealand change its name? This is the proposal of the Maori party