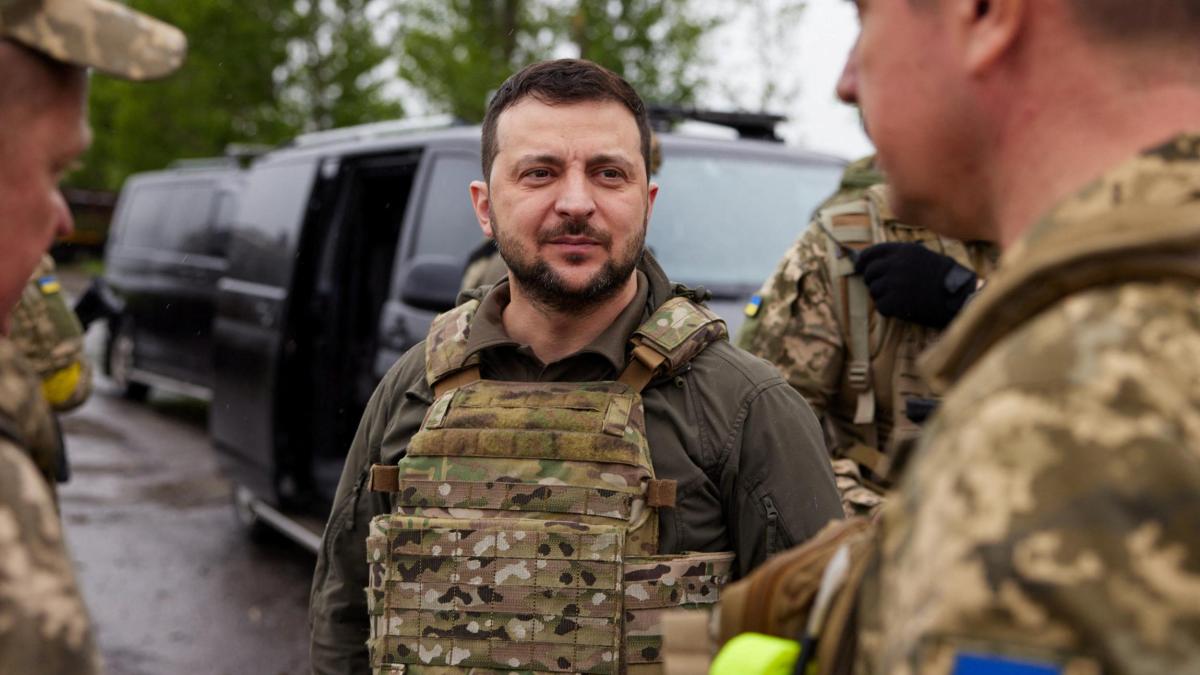 Selenskyj thanked the soldiers for their commitment. “I am immensely proud of our defenders. Every day they risk their lives to fight for the freedom of Ukraine,” the President said. As the Reuters news agency reports, it is the first time since the Russian invasion on February 24 that Zelenskyi has left the region around the capital Kyiv.

While Zelenskyi received a report from the military leadership on the operational situation at the front, he spoke to Governor Oleh Synehubov about the damage to civilian objects in the region. According to Synehubov, more than 2,000 houses were destroyed in Kharkiv and the surrounding area. 31 percent of the territory is still under Russian control. According to a Reuters reporter, several explosions were heard in Kharkiv a few hours after the president’s visit. A plume of black smoke rose over the north-east of the city.

According to Ukrainian sources, Russian troops began storming the city Shevjerodonezk. The Ukrainian regional authorities announced on Sunday that there was heavy shelling and hand-to-hand fighting in the city. The power supply in the city went out. There was also no cell phone connection.

Selenskyj accused Russia of the extensive destruction of the city in the Donbass. The entire infrastructure was destroyed, he said in a video message in Kyiv on Sunday. “90 percent of the houses are damaged. More than two-thirds of the city’s housing stock has been completely destroyed.” The city is constantly being attacked.

The Russian army wanted to capture Sieverodonetsk at all costs. “And they don’t care how many lives they have to pay for the attempt.” The attackers wanted to hoist their flag on the administrative building of Sieverodonetsk, which stands on the Boulevard of Friendship of Nations, Zelenskyy said. “How bitter that name sounds now.”

Ukraine is doing everything to contain the offensive. “There hasn’t been a single day that we haven’t struggled to find more weapons, more modern weapons, to protect our country, our people,” the president said.

Sievjerodonetsk has been the target of Russian attacks for months. The city is considered the last point that the Ukrainian military still keeps under control in the Luhansk region. In its situation report on Sunday evening, the Ukrainian general staff announced that the Russian army was trying to “get a foothold on the north-eastern outskirts of Sievjerodonetsk” and were carrying out attacks in the direction of the city centre. The ground offensive is supported by artillery and air force.

At the same time, Russian troops intensified their attacks on the nearby area Lyssytschansk, which was under constant fire. Lysychansk and Sievjerodonetsk had a combined population of around 200,000 before the war and were the last major areas in the Luhansk region still under Ukrainian control.

Despite heavy shelling, civilians managed to flee the area. Some reached Pokrovsk, 130 kilometers to the south, from where they wanted to continue west on Saturday.

Jana Skakova burst into tears as she reported with her 18-month-old son on her lap about the non-stop bombardment by Russian troops and that she had to leave her husband behind. “Jehor is a year and a half old and now without a father,” she said. At the beginning of the war there were still periods of rest in Lyssychansk when she could cook on the street. The children could then play outside. But in the end she couldn’t get out of the basement. The shelling was just too scary.

The ruler of the Russian republic of Chechnya, Ramzan Kadyrov, declared on Telegram on Saturday evening that Sievierodonetsk was completely under our control. “The city has been liberated,” Kadyrov declared.

The city of Lysychansk is also attacked by Russian troops. Despite heavy shelling, civilians managed to flee the area. Some reached 130 kilometers to the south Pokrovsk, from where they wanted to continue west on Saturday. Yana Skakova from Lysychansk broke down in tears when she, with her 18-month-old son on her lap, reported on the non-stop bombardment by Russian troops and that she had to leave her husband behind. “Jehor is a year and a half old and now without a father,” she said. At the beginning of the war there were still periods of rest in Lyssychansk when she could cook on the street. The children could then play outside. But in the end she couldn’t get out of the basement. The shelling was just too scary.

On Friday, the police evacuated them from the basement where they had lived for two and a half months – 18 people, including nine children, said Skakova. “None of us wanted to leave our hometown. But for the sake of these little children, we decided to leave.” She fled with her two boys – 18 months and four years old. Her husband wants to take care of the house and the animals.

In the southern Ukrainian port city Mariupol meanwhile, a cargo ship arrived for the first time, as reported by the official Russian news agency TASS, citing a spokesman for the pro-Russian port administration. The Ukrainian Navy said on Facebook that it was “manipulation” because Russian ships continue to “block civil shipping in the waters of the Black and Azov Seas,” in violation of international shipping rules.

On Friday last week, Russia announced the complete “liberation” of the Azov steelworks in Mariupol, which had been heavily contested for weeks. The last remaining Ukrainian soldiers there had previously surrendered.

“Kick-off Politics” is WELT’s daily news podcast. The most important topic analyzed by WELT editors and the dates of the day. Subscribe to the podcast on Spotify, Apple Podcasts, Amazon Music or directly via RSS feed.