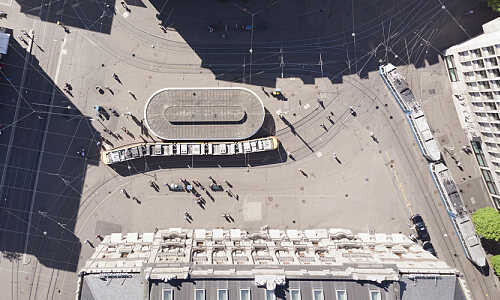 A rift has opened up between Credit Suisse and UBS. This does not only follow the share price development of the two major Swiss banks. The expectations for the two-quarter results could not be more different.

A comparison is currently inadmissible: UBS or Credit Suisse (CS) – which major Swiss bank is performing better in terms of the publication of the figures (UBS on Tuesday tomorrow, CS on July 29) for the second quarter of 2021?

The answer is provided by a look at the price development of the two stocks: UBS is by no means a top performer with an increase of almost 10 percent since the beginning of the year. But for an even worse share on the Swiss market than CS, with its minus 27 percent, you have to look for a long time.

CS has had a quarter of suffering behind it. After the billion-dollar loss with the New York finance firm Archegos Capital, there is a high level of uncertainty about the medium-term future in the bank. In the investment bank, the wave of departures is not ebbing. The vague prospects regarding repayments from the debacle with the Greensill funds weigh on the CS employees as well as on the affected customers in asset management and private banking.

In the stupidest moment

The battered reputation makes the acquisition of new customers and new money a difficult task. The investigations into the incidents and the instructions from the Swiss Financial Market Supervisory Authority to only do business with limited risks make business operations more difficult.

With a view to UBS and the developments in the US competition, CS struggles with existing and old burdens at the most stupid moment. Compared to the more robust UBS, which has also dumped CHF 800 million with Archegos, the CS threatens to sink into a different category. Compared to banks like Goldman Sachs or JP Morgan, with whom CS sees itself in the same peer group, that has already happened.

Archegos is also making an impact in the second quarter

Last week Goldman Sachs reported a quarterly profit of 5.5 billion dollars, JP Morgan of almost 12 billion dollars – supported on the one hand by the US economy running at full speed, on the other hand by the respective investment banks and the business with mergers and acquisitions (M&A).

While CS was still an earnings machine in the first quarter of 2021 – apart from the billion-dollar disputes – especially in the investment bank, the forecasts for the second quarter are completely different: earnings of around 1.75 billion Swiss francs are, according to analysts’ forecasts, expenditures of 1.7 billion Swiss francs. The CS investment bank is therefore also writing a loss in the second quarter of 2021.

The expectations of the asset management business and the acquisition of new customers are also very subdued. A cash outflow is expected here in asset management, and an increase of around 3 billion francs across all units.

Much better, if unspectacular, are where a quarterly profit of a good $ 1.3 billion is in prospect; significantly less than in the first quarter, but with growth compared to the same quarter of the previous year. In the core business of Global Wealth Management, the significantly calmer markets had an impact on customer activities.

The earnings will be significantly lower compared to the first quarter. The focus will therefore be on the implementation of the cost program: The goal is to save one billion dollars by 2023. In the second quarter, however, restructuring costs of around $ 300 million are likely to have been incurred.

Here the future, there the past

The big gap between UBS and CS is not just made up of stock exchange prices and business figures, but also the fact that the starting position has changed again since this spring. While UBS under its new CEO Ralph Hamers pursuing a strategy for the future and having the means and capacities to invest in the technological restructuring, CS is preoccupied with its past.

It has to clean up legacy issues that affect the corporate culture and, more specifically, the deficiencies in risk management. The Chairman of the Board of Directors knows that this takes time Antonio Horta-Osorio made it clear by announcing that no decisions on changes in CS’s strategy are to be expected before the end of the year.

In other words: UBS is already building the future, CS cannot even imagine it.

There is a threat of inflation. But is it also coming?