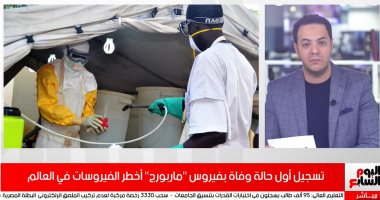 Turns the patient into a ghost.. The first death from one of the most dangerous viruses in the world was recorded

The Seventh Day TV provided special coverage about the World Health Organization’s announcement of the first death from the “Marburg” virus in Guinea, West Africa, to start a new concern that dominates the world, especially in light of the health conditions witnessed by most countries of the world due to the Corona virus and its multiple strains..

And the World Health Organization revealed the details of the death of the first case of the dangerous “Marburg” virus, stressing that the patient was initially treated in a local hospital before his condition rapidly deteriorated and died, just two months after Guinea was declared free of the “Ebola” virus after a short outbreak this year. Killed twelve people.

The World Health Organization confirmed that the Marburg virus is one of the three most deadly and life-threatening viruses other than Corona. The Marburg virus was first detected in 1967 in the German city of Marburg and was therefore named after the city.

Historical sources, including the World Health Organization, indicate that the first outbreak of the virus was in laboratories in the cities of Marburg and Frankfurt, Germany, and in Belgrade, the former Yugoslavia, due to laboratory activities that were using African green monkeys or the so-called Saadan Al-Hagras imported from Uganda, and 25 cases were recorded. of primary infections, and led to seven deaths.

According to the World Health Organization, since the virus was identified, the world has witnessed twelve outbreaks, most of them in southern and eastern Africa, the most severe in Angola in the years (2004-2005). The Ministry of Health in Angola confirmed the occurrence of three hundred and seventy-four cases, and it was found that there is a direct relationship between all the cases that were discovered in other provinces..

See also  The WHO has counted more than 50,000 cases since the beginning of the year

Death rates in Marburg virus cases ranged between 24% and 88% in previous outbreaks, and the World Health Organization adds that “the percentage depends on the strain of the virus and the method of dealing with cases.”