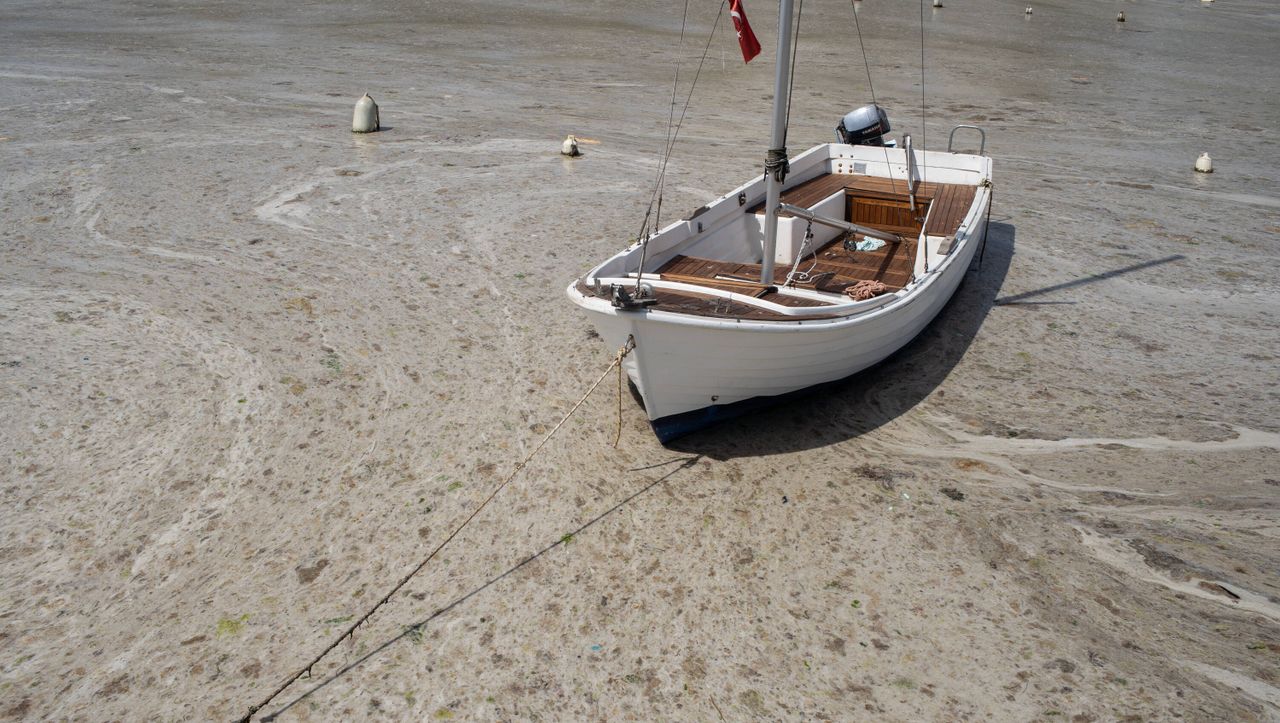 The “Science-2” struggled through a slimy broth. Last week, the research ship of the Technical University of the Middle East was sailing in the Sea of ​​Marmara not far from Istanbul.

The researchers on board wanted to find out what the viscous substance is all about, which has recently covered ever larger sea areas in the region. “We saw a gel-like structure that spreads across the sea, and we have never before encountered such a large mass,” reports marine researcher Barış Salihoğlu after a trip in Turkish media.

His colleague Mustafa Sarı from Bandırma Onyedi Eylül University was able to show during dives to a depth of 18 meters that the phenomenon also occurs on a massive scale underwater: »Unfortunately, the formation of slime continues. The bottom of the sea is covered with slime. ”Visibility has dropped to just three feet. Corals, starfish, crabs and mussels were covered by the viscous mass, according to Sarı.

One thing is clear: the so-called red sea is not the first time that the sea of ​​Marmara has been polluted; Accordingly, unicellular diatoms and dinoflagellates, which occur in large quantities in so-called flowers, are responsible for the problems. When the algae die, they serve as food for bacteria. In addition, certain carbohydrates, so-called exopolymers, are produced. These ensure the slimy coating on the water.

Italian researchers also reported several years ago that the phenomenon is spreading more and more in the Mediterranean due to rising temperatures. There are many reasons for this, but two decisive factors can be identified: On the one hand, there are the steadily rising average temperatures of the surface water in the man-made climate crisis, and on the other hand, the high nutrient input into the water, which is mainly due to excessive fertilization of agricultural land. These chemicals end up in the oceans via rivers – and stimulate algae growth there.

It becomes particularly problematic if the seawater is not mixed well enough. That is the case in the Sea of ​​Marmara. Here, low-salt water from the Black Sea and Turkish rivers forms an upper layer that has little exchange with the more saline areas below. These are ideal conditions for algae to grow. This in turn can pose a threat to fish stocks if the rapid growth of the single-cell organisms makes oxygen scarce in the water.

Many of the factors that are responsible for the appearance of the sea red do not only occur in the Marmara and Mediterranean – but also, for example, in the Baltic Sea. If you ask marine researchers whether we are threatened with similar images on our coasts as we are currently in Turkey, the answers are nevertheless rather cautious: This is mainly due to the fact that there is not yet enough information about the exact conditions in Turkey are present.

Some things can still be said – and they don’t necessarily put you in a good mood either. One problem is the rapid warming of the water: “The water temperatures in the Baltic Sea are rising faster than in other regions of the world,” says Matthias Labrenz from the Leibniz Institute for Baltic Sea Research in Warnemünde. “And the models show that this will continue in the future.” By 2100, the average surface water temperature is expected to rise by two to four degrees. In addition, the water of the Baltic Sea is likely to become less and less salty – because it will rain more in Scandinavia in the long term.

In his work, Labrenz does not deal with algae, but with bacteria. Specifically, it is about so-called vibrions. They occur naturally in the plankton of the Baltic Sea – and some species can be dangerous for humans. About a tenth of the 130 known species can cause infections, which can also be fatal. People with a weakened immune system or previous illnesses have a particularly high risk of severe sepsis. In these cases, in extreme cases, it can be sufficient to stand up to the ankle in the vibrated Baltic Sea water.

Vibrions occur more frequently than before, and the distribution area is also growing to the north and east. In a joint European project that has just started, Labrenz and other researchers want to find out whether the Vibrios can possibly be contained with natural means. Among other things, it will be investigated whether seagrass meadows can play a positive role in controlling bacteria.

Labrenz’s colleague Anke Kremp, on the other hand, deals with algae. From coastal waters of the Baltic Sea, including off the German coast, she knows pictures from past years that look at least very similar to the current ones from Turkey. “In the Baltic Sea we have the annual cyanobacteria blooms at the end of summer,” says Kremp. If the wind presses the biomass onto the land, it could also lead to “unsightly pollution”. “We know that the increasing number and intensity of the flowers is related to the rising water temperatures.”

The researcher says that other algae species such as the dinoflagellates have recently seen more and more flowers, for example off Sweden and Finland. “That can also lead to local fish deaths. In addition, poisons produced by the algae can accumulate in the food chain. “

If you ask Kremp whether she still goes swimming in the Baltic Sea, she laughs. The institute building in Warnemünde is almost directly on the beach promenade. “Most of the time in summer the water is clear,” says the researcher. But if the Baltic Sea is cloudy, then it might not be a good idea to swim.