It is often said that migrants can become an extraordinary economic and political resource. True. If there is a place where the concept is applied literally, this is Recep Tayyip Erdogan’s Turkey, but in a completely different sense. For him the great humanitarian crises from Afghanistan to Syria, up to Libya, have become the opportunity to collect money, and the tool of retaliation with which to play a complex strategic and energetic game. His clear line: from the use of migrants to political-military influence, every good means to become the strong link between the Islamic world and Europe.

For him, the great humanitarian crises from Afghanistan to Syria, up to Libya, have become an opportunity to collect money

The rise of Erdogan

How did you come up with such a decisive Erdogan? We must go back to the first decade of the 2000s. When the three wars that gradually break out in Afghanistan (2001), Iraq (2003) and Syria (2011) make Turkey the obligatory passage for millions of refugees. Erdogan, the former mayor of Istanbul and leader of the new Islamist party fighting for Turkey’s entry into the EU, is elected premier. Until the Arab Springs of 2011, it guarantees a containment of the so-called Balkan Route, the path of the desperate that crosses Bulgaria, Greece, Macedonia, Serbia and reaches the continental heart in Hungary and Croatia. For a long time, on the Greek islands, there are never more than 10 thousand landings a year. And immigrants enter Europe mainly from Africa, crossing the central Mediterranean. The things per they change in a short time for three reasons. The first: the discovery of gas off the Middle Eastern coasts. The second: after a long debate the doors to Turkey’s entry into the EU are definitively closed, due to the hostility of Germany which fears a huge wave of Turkish asylanten. The third: the war in Syria has moved four million refugees to Turkey, with half a million children born in the past five years alone. Isolated from the Europeans, besieged by refugees and excluded from the energy game, Erdogan changes objectives and strategies. Let’s see which ones.

Turkey today is one of the countries in the world with the highest number of refugees, over 5 million, out of a population of 80. Tired of being a porter for the passage by land of Syrians and Iraqis, Pakistanis and Afghans, since 2016 it has decided to monetize the emergency – 6 billion and 700 million euros collected by the EU, plus another half a billion on the way, as long as the rafts do not land on the Greek islands – and to make them a tool of blackmail to gain international weight. At the UN General Assembly on 24 September 2021, as Kabul plunged into chaos, the Turkish leader said: If the Americans send Afghan refugees to us, let us give us the logistical, diplomatic and financial support we need. And we will deal with the Taliban. The government of Ankara, without providing details, has estimated the aid needed to manage the ten-year Syrian crisis at 40 billion dollars. And now that the emergencies have multiplied, his policy has become that of outsourcing the control of European borders: I keep the migrants who would come to you, but in exchange you pay me in hard cash and in political openings. 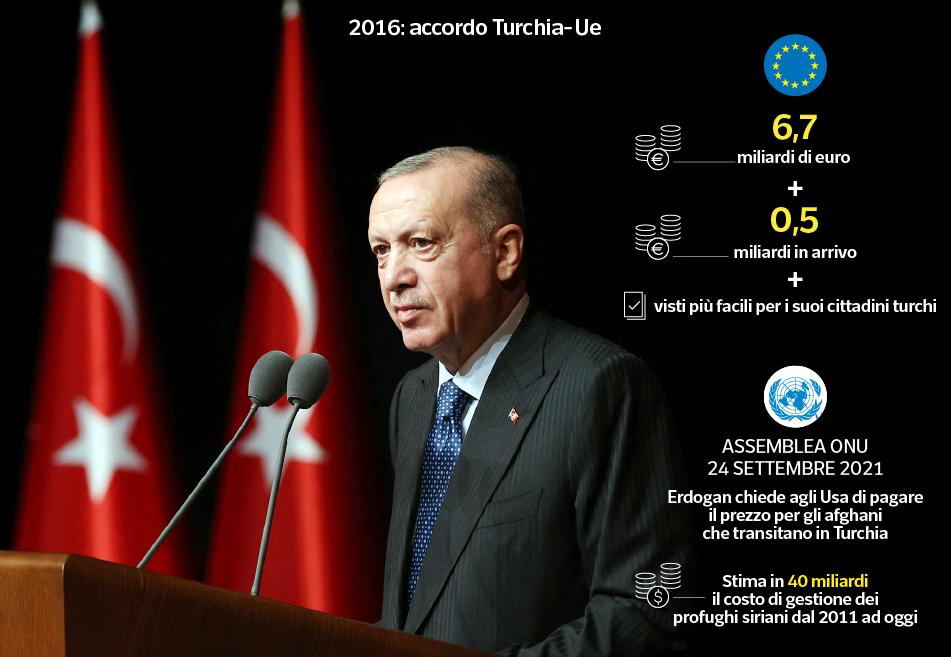 Retaliation against migrants for not working on the table of the war for gas resources in that piece of sea in front of the house. In the eastern Mediterranean seabed, huge natural gas fields have been discovered since 2010. In the submarine gold rush they participate Egypt, Greece, Cyprus, Israel, everyone Countries that have unfriendly relations with Ankara and that, in agreement with Europe, are planning a gas pipeline to cut off the untrustworthy Turks. Locked in the double grip, Erdogan had to ask himself how to get out of it. He found the solution by looking at the other side of the Mediterranean: Libya. Precisely there, where the new gas pipeline should pass, and where possible re-propose the same scheme of extortion experienced with the Syrian crisis. In 2015, when 1.3 million Syrian refugees move from Turkish coasts to enter Europe, Erdogan contains them by obtaining various concessions in exchange, including a quota of visas easier for his citizens. 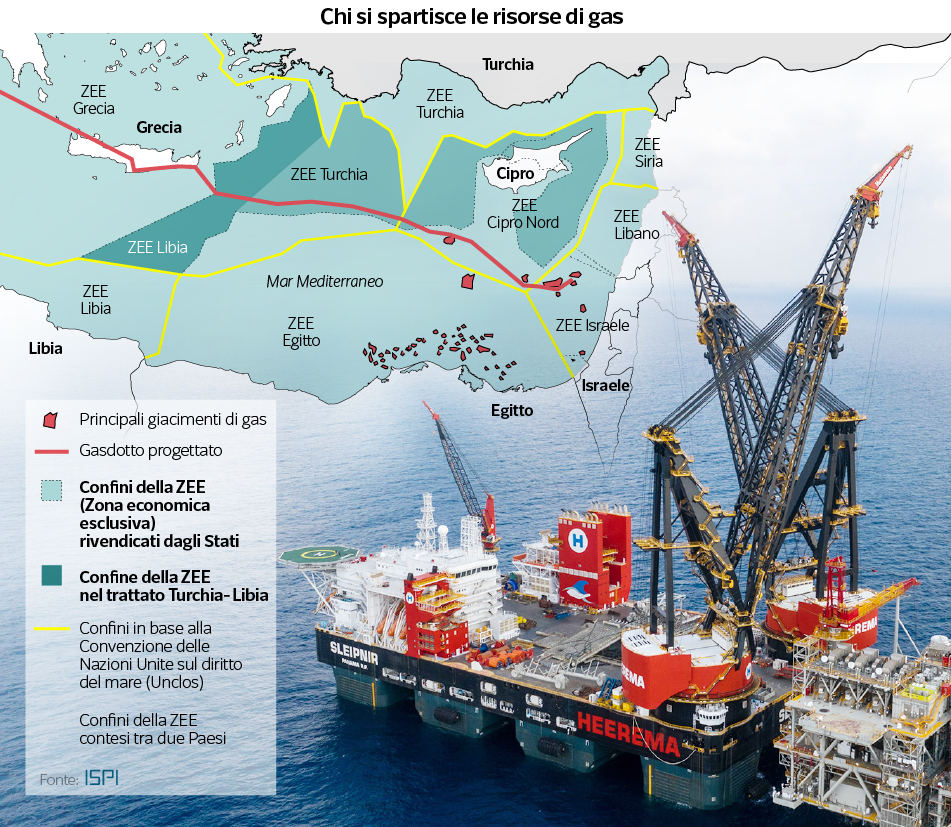 The opportunity for Erdogan presents itself in January 2020. The weakness of our foreign policy in Libya during the two Conte governments, he left free space, e allowed to Erdogan to disembark in less than two years, hundreds of military advisers. By getting Ankara and Tripoli to sign an exclusive agreement for the control of the Tripolitania coasts, for mutual defense and for the exploitation of gas and oil in the central Mediterranean. Taking advantage of the civil war between General Khalifa Haftar (supported by Russians and Egyptians) and the government of Tripoli, supported by the international community, Turkey sends troops, weapons, and moves its mercenary militiamen from Syria to Libya, in support of the government of Tripoli. A clever move: from that moment, Erdogan can sit at the table of the 11th largest oil producer in the world, asking Tripoli also the management of the airport and port of Misrata for the next 99 years. Just a month before the military intervention against Haftar, Erdogan signed an agreement with the Tripolini for the exploitation of their underwater natural resources, 10 billion for the reconstruction of structures and infrastructures, and in the meantime he began to control the flows arriving from Sahel and sub-Saharan Africa. An example of this new role in the central Mediterranean can be seen immediately: in January 2020 the Turkish frigate Gaziantep, committed to escorting a load of arms bound for Tripoli, on its own initiative recovers a boat of migrants bound for Italy and brings it back to Libya. an illegal push back, but sufficient to legitimize the Turkish presence in our sea. 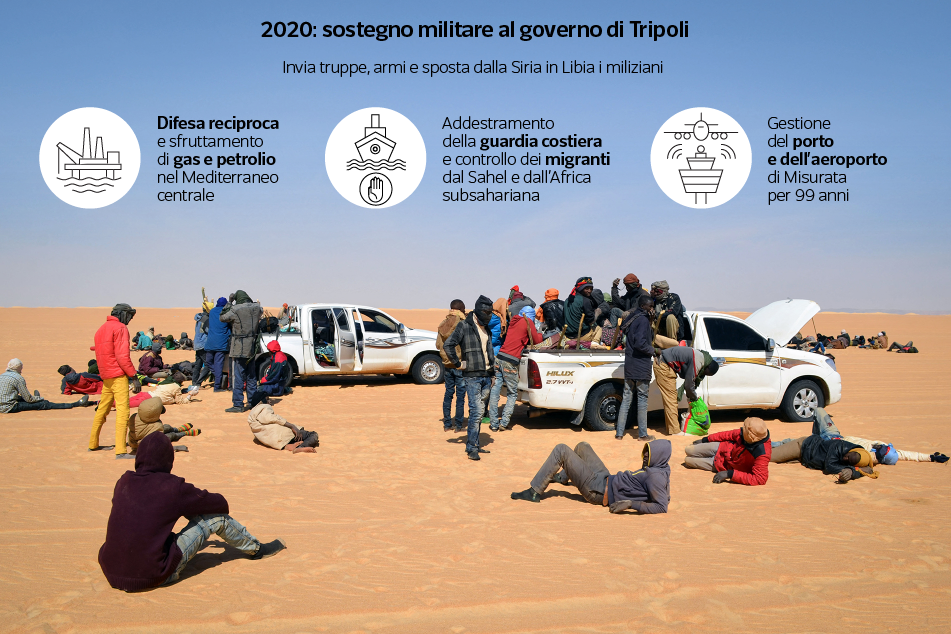 After the agreement with the EU on Syrian migrants, the Turkish game is evident: the borders first close, going from 1 million 300 thousand refugees on the Balkan routes in 2015 to an average of 20 thousand in 2018, to then reopen in 2019 with 159 thousand refugees on the Greek coasts. AND when Europe decides to impose economic sanctions for Erdogan’s military operations in Syria, or worse still on the Kurds, here is the threat: If you try to call our operations an invasion – says the Turkish leader in 2019 -, we will open our borders and send three and a half million refugees there. And the penalties are easing. The promise kept the following year: in 2020 Ankara beats cash, but Brussels slows to respond, and then Turkey moves 130,000 desperate people on the 120 km of land border with Greece. A few months later and the economic agreement with the EU is renewed. 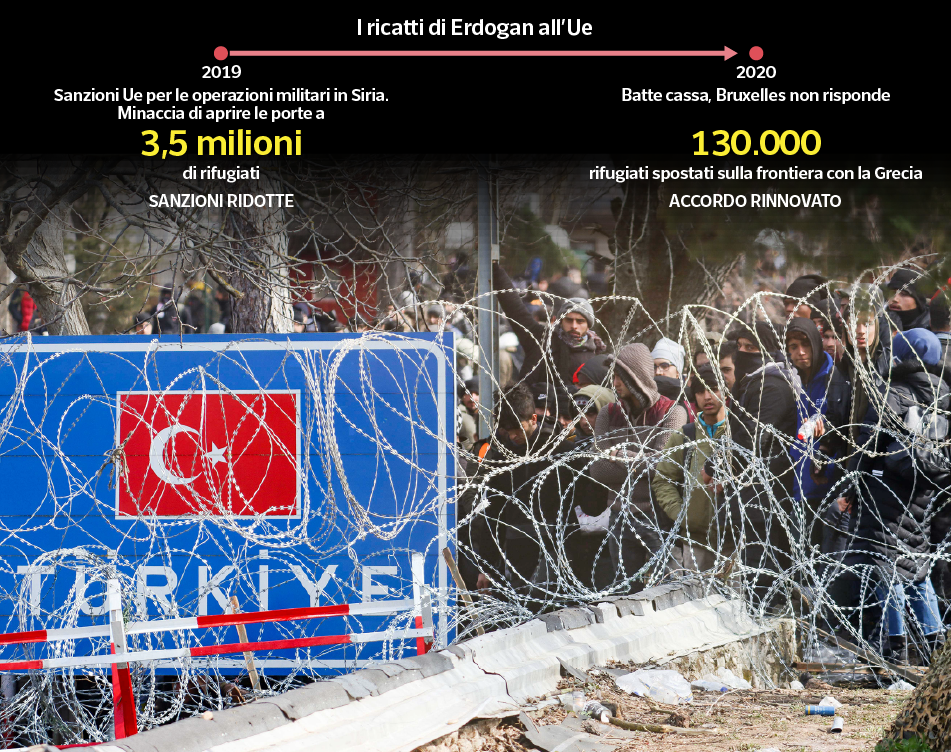 an easy game, if you are the one who regulates the migration taps both from the East and from the South and, in the meantime, you get ready to check those of gas and oil too. And in contempt of every rule: Turkey has never respected the clause, contained in the agreement with the EU, which requires it to take back a migrant landed in the Greek islands for every migrant who is relocated to Europe. In five years 2,140 have recovered, compared to 15 thousand landed in Greece in 2020 alone. The same is true for the money that Europe has paid to block traffic: they are intended for the modernization of customs and borders, in reality they are used to buy weapons and fight the Kurdish minority. 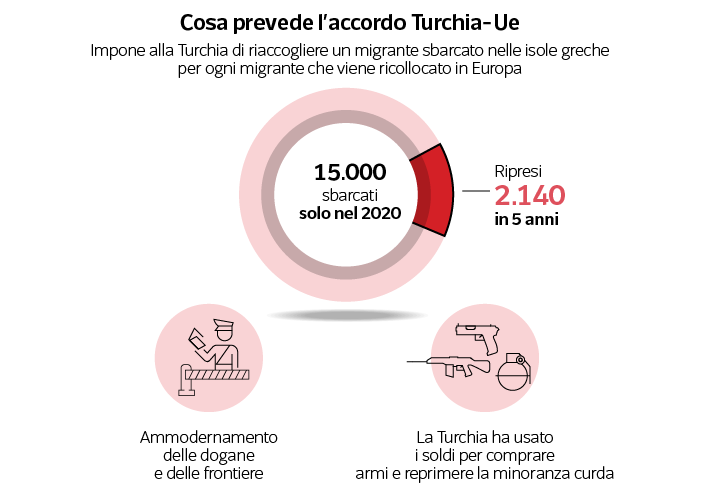 This situation is exasperating the most exposed European countries on the last EU border with Turkey, Greece and Bulgaria, which are among the 12 governments that have asked Brussels to build walls, to add to those that already exist. And now on the Mediterranean route the same scenario could be envisaged: if Europe or Italy dare to raise objections on the gas pipelines, or on all the other Libyan consignments on which Erdogan is negotiating, the draft of migrants is ready. We know well that the phenomenon of migratory flows is not solved by building walls, but also having thought of getting out of it unscathed by hiding them under the carpet of the Turkish dictator says a lot about the strategic inability of the Union.