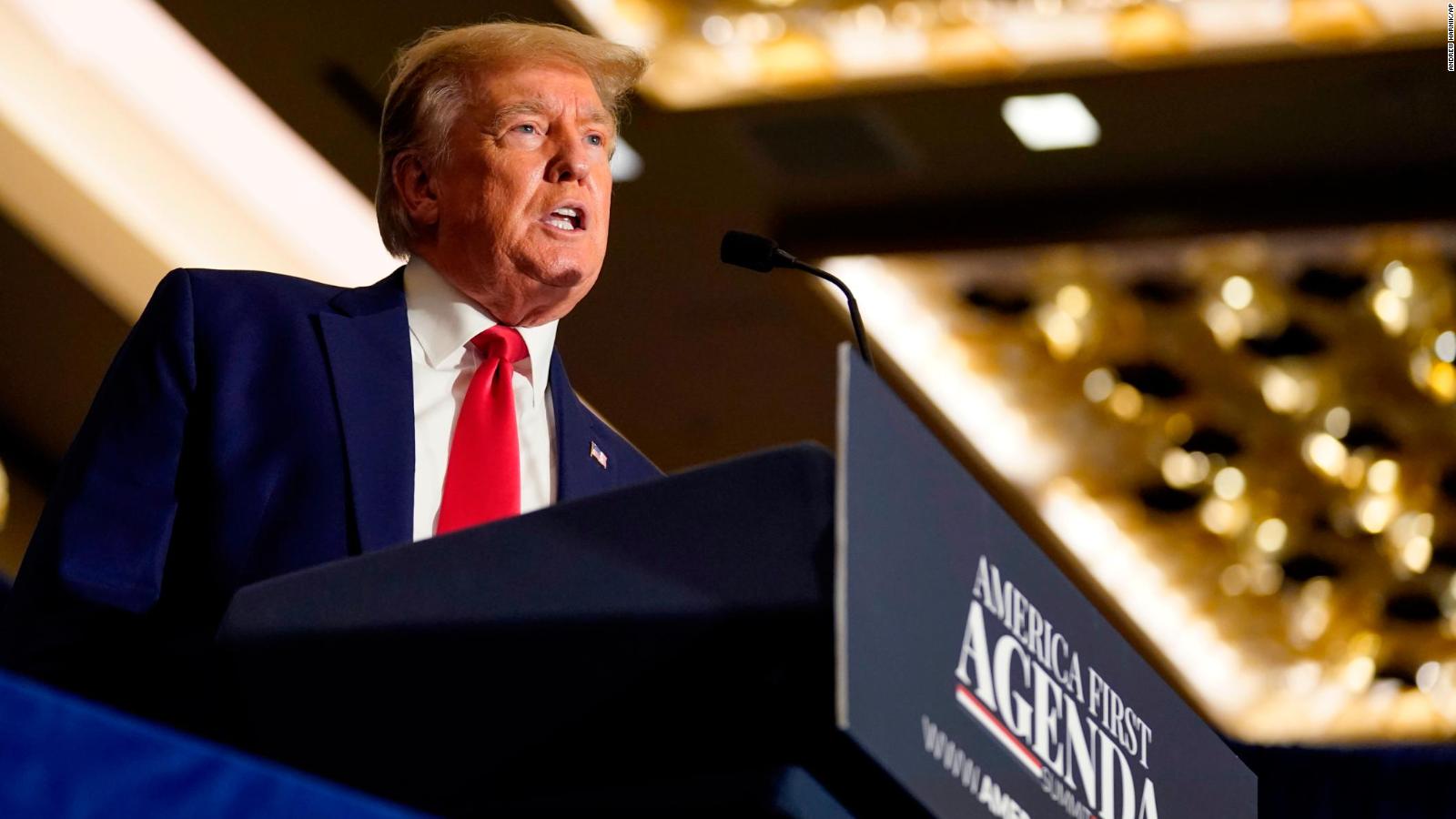 Trump: We have become a beggar nation 4:08

(CNN) — The last time Donald Trump made a major speech in Washington from outside the White House, he unleashed a vicious mob attack. This time there was no violence, but his searing bombast may have heralded the dawn of a new era of American extremism.

Trump returned on Tuesday for the first time since leaving the US capital in disgrace in January 2021 and made it clear that he plans to lead the country down a dark, demagogic and dystopian path in the coming months. His assertion that launching a White House campaign in 2024 is not a question of if, but when, has never seemed more certain.

Trump vowed at the America First Policy Institute summit to “save our country,” chillingly employing many of the rhetorical devices of authoritarian leaders while brimming with bitterness, a persecution complex, and stoking resentment against vulnerable members of society, such as homeless people and transgender athletes. The former president conjured up an updated and intensified image of the “American carnage” he first exposed in his 2017 inaugural address. He spoke of a “failed nation” awash in historic inflation, begging the Saudis for oil, a means that they see themselves as “honesty police”, “deep state” bureaucrats, “mercenaries and thugs” in Congress and cities overrun by undocumented immigrants preying on innocent citizens who exemplify contempt for law and police .

Amid new signs of an expansive Justice Department investigation into the election-stealing scheme launched by his cronies and shocking evidence about his 2020 coup attempt offered by the House select committee, Trump complained that Democrats had “used law enforcement as a weapon … against the opposition party.” His protest against investigations that could hold him accountable for his failure to perform his duty while in office highlighted the absurdity of the only president to have launched an insurrection lecturing on law and order.

That was a point picked up by President Joe Biden, who tweeted: “Call me old fashioned, but I don’t think inciting a mob that attacks a police officer is ‘law enforcement.’ You can’t be pro-insurgency and pro-police, or pro-democracy, or pro-American.”

As so often, Trump’s complaints about the alleged actions of others reflected his own transgressions. It was he who tried to weaponize the Justice Department, go after political enemies, offer pardons to allies, and seek to nullify the 2020 election.

And when Trump complained that his Democratic enemies were guilty of misinformation against him — “They say things and they think you will believe them” — he could have been describing his own lies and alternate realities that are amplified by the media machine. conservative who convinced millions of Americans that they stole the election.

See also  # NoticiasDelDía: Supreme Court allows Texas anti-abortion law to continue to be challenged, although it keeps it in effect - Univision Noticias

Trump’s comments also seemed like a hedge against any attempts by the Justice Department to hold him criminally accountable for his conduct after the 2020 election. Still, Attorney General Merrick Garland vowed that outside political forces would not deter the department if the charges warrant it.

“We seek justice without fear or favoritism. We intend to hold everyone accountable, anyone who is criminally responsible for the events surrounding January 6 or any attempt to interfere with the lawful transfer of power from one administration to another,” Garland told NBC News’ Lester Holt in a taped interview that partially aired Tuesday on MSNBC. “That’s what we do. We don’t pay attention to other issues regarding that.”

The key to Trump’s genuine appeal

Hear the Lies Repeated by Trump Supporters About January 6 5:57

In many ways, Trump’s speech was a supercharged version of when he first launched his 2016 presidential campaign. He lashed out again at undocumented immigrants and crime, promising to build his border wall. He seized on the economic struggles of the Biden administration and, by comparison, described his own tenure as a golden age, when Americans were safe, prosperous and respected.

Democrats may not like to hear it, but Trump’s message remains seductive to many Americans who believe the country is beset by open borders, political correctness, weak policing and mistreatment by foreign allies. A democratic system channels the frustrations and beliefs of broad sectors of society towards political campaigns and administrations. (Not that Trump has shown that he has much respect for the will of the voters.) So while Trump’s methods are often authoritarian and outrageous, he is not operating in a political vacuum. His strength as a candidate is that he felt a deep disillusionment with the political system in 2016 that brought him to power. He is now testing a similar formula.

Some liberal media critics still complain that a former president gets so much coverage, years before the 2024 election, and that the attention only drives Trump. But while he is banned from Twitter and has been largely confined to the conservative media for the past 18 months, the pulse of Trumpism is pounding in the heart of the country. The forests of Trump 2020 and Trump 2024 banners outside major cities may be an anecdotal sign of strength, but they are ubiquitous and a sign that he reaches some voters like no other politician.

And before long, Democrats and the small but brave group of anti-Trump Republicans will have to take on the former president directly. Biden appears to have recognized this already given his own strident attacks on Trump over the past two days.

A second Trump administration would be more extreme

Trump’s speech on Tuesday was an unmistakable sign that he is on his way back, takes his bid to regain power very seriously and would use any means at his disposal to make it happen.

This time, the Trump campaign would be run in full knowledge of his authoritarian impulses and willingness to use violence: on January 6, 2021. A second Trump presidency would make the first seem conventional and calm. The former president, for example, called Tuesday for homeless Americans to be transported from city centers and taken to tent camps. He poked fun at trans athletes and said presidents should be able to send National Guard troops to Democratic states where governors aren’t cracking down on violent crime. He called for speedy trials for drug dealers to speed up speedy executions and demanded the return of “stop and frisk” policies in cities that critics denounced as institutionalized racism.

“Our country is now a cesspool of crime,” the former president said, painting a vision of a country held hostage by “drugged-up lunatics” and “sadists.” He promised to purge the educational system and fire the “rogue” bureaucrats who restrained his wildest impulses in the first place.

In short, Trump advocated an all-powerful presidency that would trample on the railings of law and the Constitution and the elected power of governors. In other words, an administration that would be even more aberrant and authoritarian than the first.

Unlike many of his campaign speeches, Trump did not spend his entire appearance fomenting lies about his loss in the 2020 election. But he did set the crowd on fire with claims that he won two elections, not one. This argument appears to be effective among his most ardent voters, according to a new CNN/SSRS poll released Tuesday. 66% of Republicans said Biden’s 2020 election victory was not legitimate. Still, Trump’s continued insistence in 2020 may not be a winning argument with a broader electorate. Some 69% of those polled, a new high in CNN polling, reject the falsehood that the 2020 election was stolen.

Trump’s speech on Tuesday was not the exuberant tour de force of his rallies. It also lacked the outrageous comedy of its events in its first campaign that wasn’t always seen on TV, but it was vital in convincing fans that they were in for the best party of their lives with a host who dared to say anything. that polite society disdained. On Tuesday, Trump’s monotonous dirge summed up his own bitterness and his sinister arguments. Perhaps the most disturbing aspect of Trump’s appearance, given what we know about the steps he took to cling to power in 2020, was his use of authoritarian tropes. For example, he presented himself as persecuted by law enforcement, but insisted that he endured the suffering to save the country.

See also  At least 6 dead in Amazon warehouse in Illinois

“Who has been through something like this?” Trump said, criticizing the Russia investigation, his two impeachments and the January 6 commission.

“I’m doing it for the United States. And it’s an honor for me to do it. It’s a great, great honor for me to do it. Because if I don’t do it, our nation is doomed to become another Venezuela or another Soviet Union,” Trump said. , tapping into the toolbox of a classic demagogue to pose as a Superman leader who takes on the burden of the people.

Trump’s speech on Tuesday may come to be seen as the unofficial launch of his presidential campaign. He told Republicans convinced they will win the midterm elections in November that they need help in the White House, and it will come soon.

But his march to the Republican nomination is far from assured. In the CNN poll, 55% of Republican and Republican-leaning registered voters said they don’t want Trump to be their party’s nominee in 2024. However, the GOP’s nominating system means Trump doesn’t need support. of the majority to secure a spot on the GOP ticket in 2024. An open field like in 2016 could balkanize opposition to him within his party.

A consensus anti-Trump candidate who his opponents rally behind could wreck the former president’s campaign. But that would require a major contender to show the kind of courage to stand up to Trump that has been left hanging since the former business mogul’s hostile takeover of the GOP in 2015.

Trump’s speech on Tuesday sometimes seemed like an attempt to strangle such attempts before they really get started. And he also underscored that not only has the former president not changed, but the next stage of his political evolution will be darker and potentially more dangerous than the last.