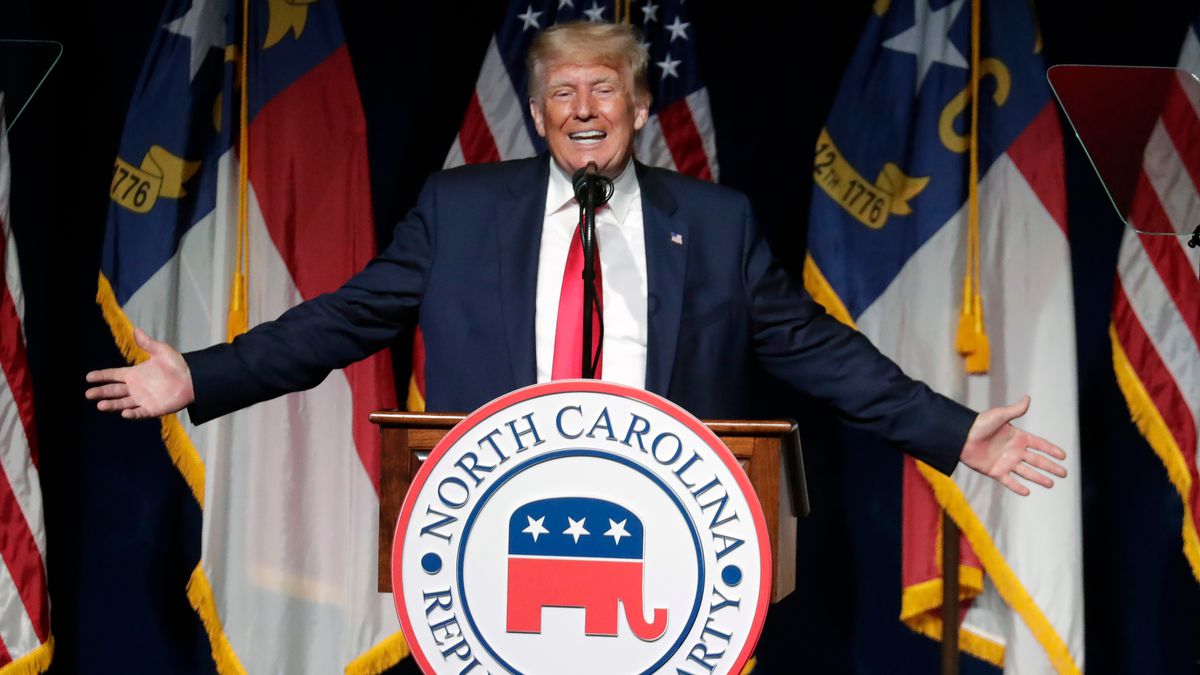 Donald Trump returned to the stage this Saturday night, after months confined in his Florida mansion without public events, and launched a speech full of dynamite against the Joe Biden Administration that laid the foundations of the campaign that he prepares for the elections legislative elections of 2022, when Republicans will try to regain control of the House of Representatives and the Senate in order to tie up the Democratic president. “They are destroying our country before our eyes,” he said as soon as he began his speech at the Republican convention in North Carolina.

On the spot, and for more than an hour, Trump accused Biden of having “completely opened the border” to undocumented immigrants, he railed against the “most radical left-wing government in the history” of the United States and raised the specter of the electoral fraud in 2020, ensuring that they voted “thousands of illegal immigrants” and people supposedly dead. It was, he said, “the crime of the century.”

The former Republican president, who still does not recognize himself as the loser of the presidential elections, threatened again with the idea of ​​running again in 2024, but above all, he showed that he already has his sights – and the machinery – on the next appointment with the polls. : “The survival of the United States depends on our ability to elect Republicans at all levels, starting with the midterm elections next year,” he said at the Greenville (North Carolina) convention center. His last public speech took place on February 28, at the closing of the Conservative Political Action Conference.

The night had a lot of already seen. The usual list of songs played before their rallies, with My heart will go on, from Titanic, and he appeared on stage an hour late, wearing his unmistakable red tie, while the usual tune played country of each start of speech, God bless the USA, (God Bless America) by Lee Greenwood. He stressed that he had bequeathed Biden an economy in a state of grace – until the pandemic paralyzed activity – and criticized the recent cyberattacks that major companies have suffered, such as the great East Coast oil pipeline, as a sign of weakness.

Since he was expelled from social media and left the White House, Trump has disappeared from the media spotlight. He has not intervened public events, mentions about him have plummeted by up to 95% on the main platforms, according to a calculation he made The Washington Post, and the blog that he opened a month ago to gather his faithful and regain the pull of cyberspace has closed with meager results. Facebook announced on Friday that it will suspend its account for two more years – responsible for encouraging violence on the day of the assault on the Capitol on January 6 – with the idea of ​​reviewing the decision in 2023.

In parallel, however, his power over the Republican Party has been consolidated. The defenestration of Liz Cheney from the formation leadership in the House of Representatives consummated this dominance. Cheney, a Wyoming congressman and daughter of former Vice President Dick Cheney (in the George W. Bush Administration), was openly battling the electoral fraud hoax that Trump and his acolytes continue to agitate nine months after the presidential elections. If a battle was being fought for the soul of the Grand Old Party Abraham Lincoln’s (Old Big Game), Trump won.

He continues to play with expectations for 2024, sliding here and there the idea that he could run again in the presidential elections, something that has little precedent in the history of leaders who lose at the polls. “The next I’m in the White House, there will be no more dinners with Mark Zuckerberg. [presidente de Facebook], at his request, and his wife. It will only be work! ”, He affirmed in a statement of three lines on Friday, after announcing the decision of this social network.

All the polls that have been done to date place him the winner of an eventual Republican primary held now, against candidates such as his vice president, Mike Pence, or the former ambassador to the United Nations Nikkey Haley. Since his retirement at the Mar-a-Lago mansion, in Florida, he continues to receive party members, grant and deny endorsements to candidates in state races through press releases, and organize fundraising evenings for his Political Action Committee, called Save America, in order to support his post-presidential political activity.

Tonight he repeated several times the motto with which he launched the race for the White House in 2016: “America first.” And he accused Biden of weighing on his legacy. “America is despised and humiliated in the world,” he said. When finished, it rang YMCA, by the Village People, and to the sound of “Young man, there’s no need to feel down, I said young man, pick yourself off the ground … …) ”He said goodbye, probably for a short time.

Subscribe here to newsletter from EL PAÍS América and receive all the informative keys of the current situation of the region.