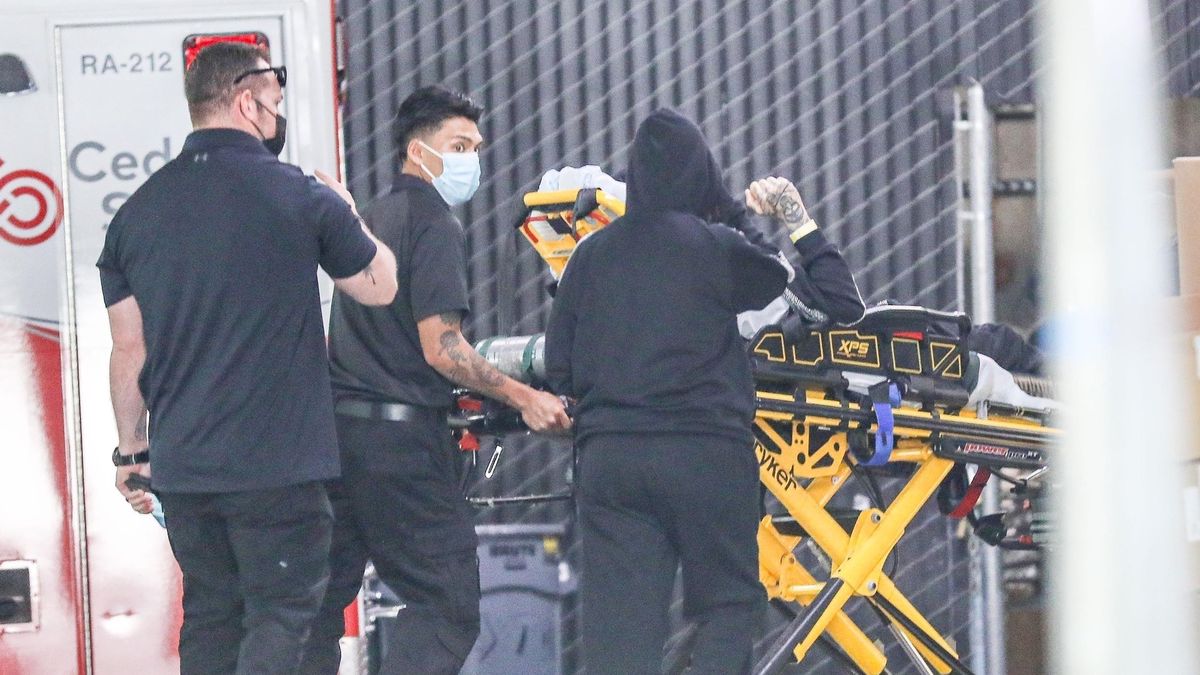 Great concern for the Blink 182 drummer: On Tuesday afternoon, the 46-year-old was taken to a hospital in Los Angeles. What exactly Barker has is not yet known.

Just a month after their dream wedding in Portofino, Italy, Kourtney Kardashian, 43, and Travis Baker are keeping the “in health and illness” part of their vows. On Tuesday, the Blink 182 drummer was hospitalized due to health problems.

According to TMZ.com, the couple drove to West Hills Hospital in the morning. The medical team there appears to have classified Barker’s condition as serious, since he was transferred by ambulance to Cedar-Sinai Medical Center in the afternoon. Paparazzi photos show the 46-year-old being transported on a stretcher. Wife Kourtney, dressed all in black with her hoodie pulled over her head, followed the ambulance in her Range Rover.

Travis himself tweeted at around 10:45 a.m. Tuesday morning, saying, “God save me.” So far, he has left unanswered whether he was already referring to his health situation or whether he was discussing the song he shared with Machine Gun Kelly (32), which has the same name.

What exactly Travis is missing is also not known. However, the concern of the fans is great – especially since shortly after Baker’s admission, his daughter Alabama (16) wrote on Instagram: “Please send your prayers.” She added a sad emoji to it. His son Landon Asher Barker (18) was on stage with Machine Gun Kelly on Tuesday night in New York City. He shared videos of his performance on Instagram.

A few weeks ago they said yes three times

The incident happened just days after Kourtney recovered from her second coronavirus infection. In mid-June, the reality TV star got loud Pagesix.com tested positive for the virus. However, it is unclear whether Travis may have been infected or whether his current state of health is at all related to his wife’s corona infection.

Just this year, Kourtney Kardashian and Travis Barker tied the knot — three times. The two first married in April in Las Vegas, followed shortly afterwards by the civil wedding in a small circle. On May 22, the couple then walked in front of the altar in a big ceremony in Italy.