Toyota starts its electric offensive in 2022 with the BZ4X, which is still a study. When it comes to the battery, the Japanese value longevity.

In cooperation with Subaru, where the corresponding model will come as Evoltis, Toyota has set up the new e-TNGA platform for electric cars: a modular electric architecture that enables front-wheel and all-wheel drive. Accordingly, electric motors are installed on both axles or only one of the two axles. The BZ4X, which is still making its debut as a concept study at the Shanghai auto show, is the first Toyota to use the new platform.

The Japanese brand’s first stand-alone battery-electric vehicle is scheduled to go into series production in mid-2022. The all-wheel drive is something like an electric RAV4; the similarities between the pointedly angular SUV models are therefore no coincidence. For example at the front: The BZ4X does without the giant grill that distinguishes the RAV4. But the front section, which is drawn in downwards, creates a play of shadows that makes the area around the license plate look like a radiator grille. The headlights of the electric SUV are even narrower than those of its conventionally powered brother.

Optical parallels to the RAV4

A number of parallels can also be seen in the side view; there are many refractive edges and beads here. There are protective elements in contrasting colors around the slightly flared, angular wheel arches. The loading flap sits between the front wheel arch and the driver’s door. The roof line ends in a lengthening roof spoiler that towers over a sloping rear window that does not drop as steeply as on the RAV4. The rear lights on the BZ4X Concept are triangular and are connected to each other by a light strip. There is a large plastic insert in the rear apron.

The interior of the BZ4X Concept should come quite close to that of the production car.

Apart from the unconventionally shaped steering wheel, the interior of the BZ4X Concept should already come very close to the later production car. In the study, the angular valance sits very deep in the instrument panel; the monitor for the digital instruments is located above it. A horizontally aligned touchscreen sits in the middle of the dashboard; the control unit of the air conditioning system is positioned separately from it. On the towering center console there is a rotary wheel that commands the transmission, around which some buttons for driver assistance systems and the like are grouped. When choosing materials, the Japanese seem to have chosen sustainably produced surfaces for the dashboard and the five seats.

Toyota has been very cautious about the drive of the BZ4X Concept. Officially, the only thing is that there is an electric motor on each of the axles, which results in all-wheel drive. Toyota wants to have trimmed the drive train consisting of motors, control unit, battery management system and the integrated solar charging system for efficiency – 30 percent less consumption should make correspondingly smaller batteries necessary; the manufacturer describes the range as “competitive”. Steer-by-wide is used for steering; Instead of a physical connection, the Toyota BZ4X moves the front wheels using an electronic pulse.

It is now known that the Japanese attach great importance to longevity when it comes to batteries, although they want to reduce costs by 30 percent in the future. Most of the e-cars currently on the market come with an 8-year guarantee. This means that the battery will still have at least 70% of its output power after 8 years. If not, the customer can request an increase in the remaining capacity. At Toyota, they want to go a step further. The Japanese promise future buyers of the bZ4X even 90 percent remaining storage capacity after ten years. The development is based on the experience that Toyota has gained in building its hybrid models, said technology boss Masahiko Maeda in a presentation. “In addition, we have set ourselves a goal of 90 percent endurance performance for the Toyota bZ4 … We are currently completing our development efforts to achieve this goal!”, Says Maeda. 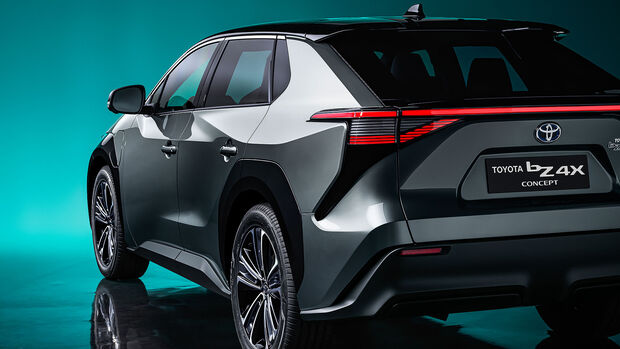 The triangular rear lights are connected to one another by a light strip.

A few references to the powertrain of the Toyota BZ4 were provided by patent drawings that had surfaced before. Accordingly, the front-wheel drive BZ4 has a 150 kW electric motor; a basic model has 120 kW. The all-wheel drive version is equipped with two engines with 160 kW. There is no other sport version. The e-TNGA platform offers a lithium-ion battery with a capacity of 75 kWh in BZ4. The maximum range is 500 kilometers, which is a little lower for the BZ4X. But after ten years, Toyota’s first electric car should still cover 450 kilometers

Yes. The Japanese have held onto their hybrids for too long.

No. The Japanese timed it right – the boom is only now starting.

Later, however, Toyota is getting serious about electronics and will be launching the BZ4, the first of six electric cars, on the market from 2022. In cooperation with Subaru, the Japanese are developing the new e-TNGA platform, which, like VW’s modular electrical construction kit, can be used flexibly. When it comes to battery life, the hybrid pioneer makes a promise that surpasses all its competitors.