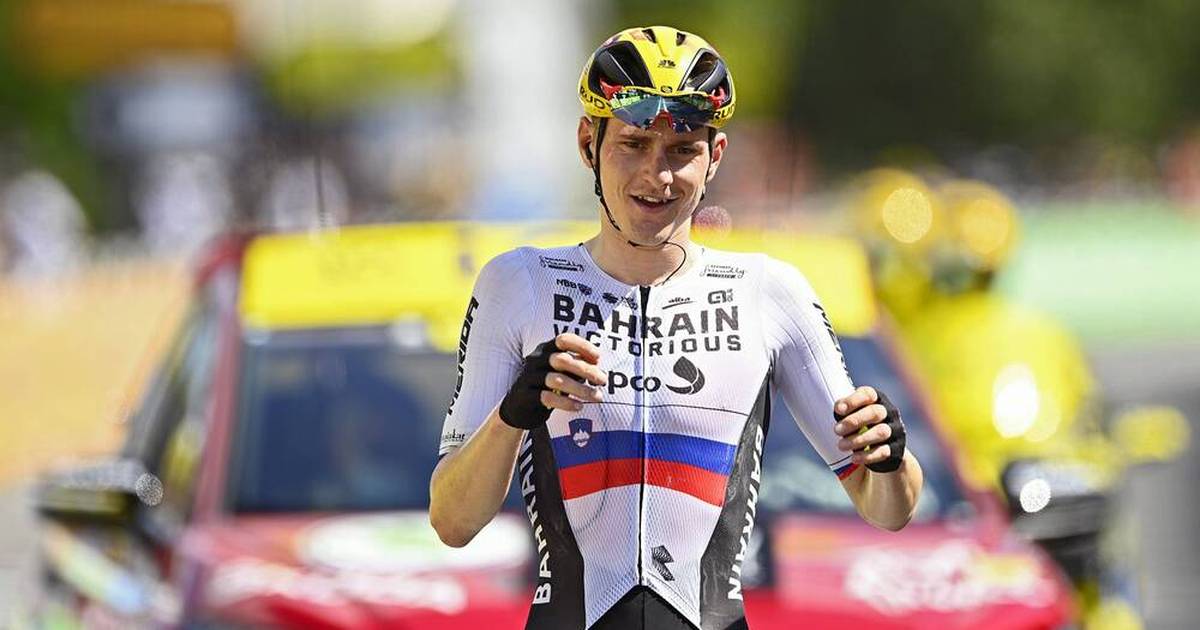 No luck with “lucky charm” Eddy Merckx, the sole stage record for Mark Cavendish has to wait!

The Slovenian Matej Mohoric stole the show from the British and won the hectic third from last stage of the 108th Tour de France as an outlier. The 26-year-old from the Bahrain Victorious team, which is suspected of doping, secured his second day’s victory at the Tour of France as a soloist in Libourne, four German outliers went empty-handed. (NEWS: Everything about the Tour de France)

When crossing the finish line, the winner of the day showed a provocative jubilation.

Mohoric pointedly pointed to the team name on his jersey and made a zipper gesture over his mouth. Apparently a reaction to the police doping raid two days ago in his team’s Bahrain-Victorious team hotel. The message from the Slovenian: The critics who accused the team of doping should be calm.

Even after the victory, he spoke again about the incident. In the last few kilometers before the goal, he thought about it and was divided. “On the one hand, it’s a good thing that it gets done, but you’re also a bit disappointed with how it went,” he said, adding, “It’s also not a great feeling when the police come into your room.”

Discover the world of the SPORT1 podcasts podcast.sport1.de, in the SPORT1 App as well as on the common streaming platforms Spotify, Apple Podcasts, Google Podcast, Amazon Music, Deezer and Podigee retrievable

In addition, he reaffirmed that he had nothing to do with doping. “I have nothing to hide, definitely not!”

But the Slovenian also had to fight hard that day, as he confessed. Above all, the fact that he was in the top group without a teammate bothered him. In the meantime, he even thought of ending the breakaway attempt and dropping back into the field.

In the end, however, he decided to fight. “Fortunately it worked.”

The last attack also surprised the four Germans in the top group. Neither Nimes day winner Nils Politt nor Max Walscheid, Jonas Rutsch or Georg Zimmermann had anything to counteract when Mohoric attacked 25 km from the finish. In the end, the best German was Politt in fifth. However, he was anything but happy about the last few kilometers. Again and again he had urged his fellow passengers to catch up with the Slovenian again, but the group did not come to an agreement. Accordingly, he drove over the finish line, annoyed.

Sprint oldie Andre Greipel only played a minor role in the main field on his 39th birthday.

Stage record: Mark Cavendish only has one chance

This year, Cavendish only has the chance to win the historic 35th day of the Tour on the Champs-Elysees on Sunday in Paris. The Deceuninck-Quick Step driver wasn’t helped by Merckx’s presence in his hunt for the record on Friday either.

The legendary Belgian, with whom Cavendish has shared the stage record (34) since this tour, had personally wished the Briton good luck before the start and followed the race in the car of tour boss Christian Prudhomme. But the peloton let a 20-man escape group with the German quartet go early.

After the tough days in the Pyrenees, the focus was not on the overall standings on Friday, everything focused on the sprinters beforehand. The route planners had rolled out a red carpet for the men with the strong thighs. It was extremely flat from Mourenx to 207 km to the destination near Bordeaux.

As Cavendish was preparing for the start of the race, Merckx personally paid him a surprise visit. The now 76-year-old hugged the man with the green jersey at the start line for several seconds. Both exchanged a few sentences before the peloton rolled off – and a spectacular race started.

While two slight falls in the early stages of the stage caused unrest, a six-man breakaway group led by Rutsch (Erbach / EF Education-Nippo) and Zimmermann (Augsburg / Intermarche-Wanty-Gobert) initially took off. Another group of chasers around Politt (Cologne / Bora-hansgrohe) and Walscheid (Neuwied / Qhubeka Nexthash) caught up after a few changes in speed in the peloton around 100 kilometers from the finish.

The main field, in which Cavendish and his rivals were in the fight for green (sprint rating), had enough, it let the escape group go. In this there were attacks over the last 50 kilometers, among others by Politt. But in the end Mohoric, who had already won the seventh and this year longest tour stage to Le Creusot, had the best legs.

Before the final stage to Paris on Sunday, there will be an individual time trial on Saturday from Libourne to Saint-Emilion.

Everything about the Tour de France 2021 on SPORT1.de: