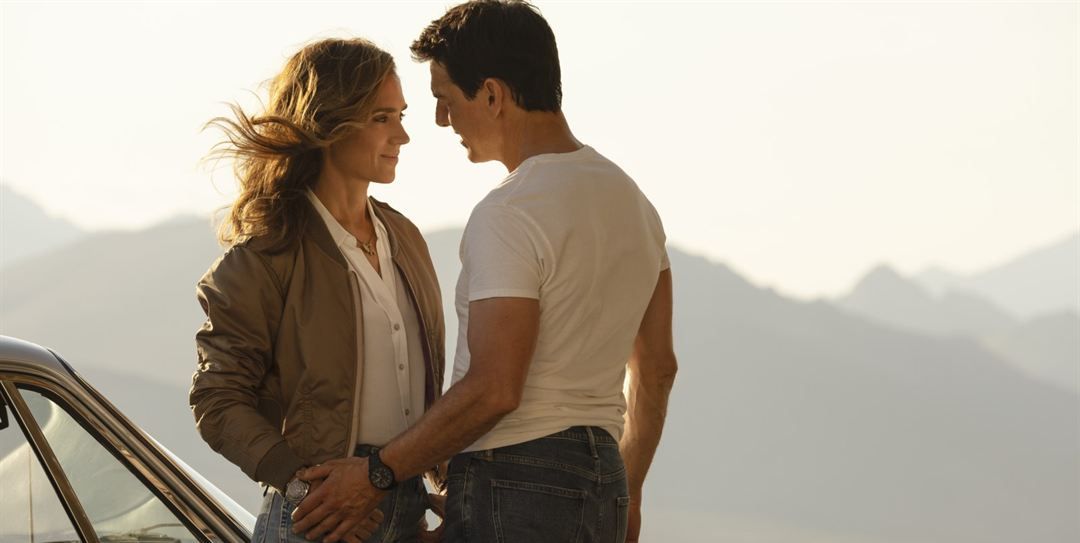 Top Gun: Maverick, the ending explained: better than the original

Yes before seeing Top Gun: Maverick you reviewed the original film you will have noticed that almost every sequence of the sequel rhymes with another of its predecessor… until the last scene of the film that does not find any previous referent. As you can imagine there is a reason for this. To understand it we have to go back to the first sequence of Top Gun: Maverick.

The film begins like a classic Hollywood film with a door that opens to the Mojave desert. There we find Tom Cruise putting the finishing touches on a prototype of a state-of-the-art ultrasonic fighter plane. The most of the most. Or not. Because Admiral Ed Harris wants to shelve the project. Manned planes are a thing of the past, he says, and pilots like Maverick, who eat, go to the bathroom and disobey orders, too. The army of drones has made them as obsolete as CGI for action movie actors and stuntmen. Who needs Maverick or Ethan Hunt having superheroes? Of course neither Cruise nor Maverick agree with it.more would be missing, and they will demonstrate it in a brilliant first sequence.

Just like in the Top Gun from 1986 the opening sequence has little or nothing to do with the rest of the story. It is, like in James Bond, an introduction to the characters and the challenge they will have to face -here the unbearable G-forces-, and it is also an excuse for them to send our hero back to Top Gun school, this time as Instructor of a new generation of pilots that includes the son of his old friend Goose.

On this occasion, however, the opening includes a new element that will be essential in the plot and in the end of the film: the vindication of people against the machine. Throughout the film we will hear it over and over again: “it is the pilot, not the plane”. And so much so that an old and nostalgic F-14 can take on two state-of-the-art aircraft if it has Cruise at the controls.

With Maverick in the elite school for pilots, the film finally lands on the main conflict, which is twofold. On the one hand, the mission – to destroy the uranium refining plant of an undetermined country with aerial acrobatics worthy of Luke Skywalker -, on the other, the drama. Maverick doesn’t want Goose’s son, Rooster (Miles Teller), to die flying a plane like his father, but he also doesn’t want to lose his godson for stopping him from fulfilling his dreams and frustrating his career.

In between we find Tom Cruise’s romance with Jennifer Connelly, who has replaced Kelly McGillis as the leading man’s romantic interest. A plot that bets on intimacy, redemption and melancholy rather than on the torrid adolescent energy of 1986, but Cruise is going to be 60 years old. What do you want. The movie wasn’t going to miss the opportunity to test whether Cruise’s years and surgeries have made him obsolete for bed and action sequences. Spoilers: of course not. Just as the writers have not missed an emotional reunion between Val Kilmer and Tom Cruise.

The end of Top Gun: Maverick closes all these plots with fidelity beyond any doubt to the first film. First, Maverick and Rooster land on the carrier with their mission accomplished.. Everyone applauds them and the two of them hug each other with their differences resolved. Same as 36 years ago. The movie even remakes the arc of a rivalry turned friendship like that of Iceman and Maverick with the characters of Miles Teller and Glen Powell, the Val Kilmer of this new generation.

Later, Tom Cruise reappears at Penny’s bar, The Hard Deck, with the wistful gaze of a returning hero with mission accomplished and loneliness in tow. It is again a reference to the last scene of Top Gun but this time Maverick is not looking for Kelly McGillis, but Jennifer Connelly. He does not find her, as Penny has taken her daughter on her vacation, perhaps fearing that Maverick would not return from the mission alive. In 1986 the film ended here, with the reunion of Maverick and ‘Charlie’. A “and they had many pilots and they were happy and ate partridges” (although now we know that it was not exactly like that), but Top Gun: Maverick holds the reunion in suspense to continue towards the true ending, which makes a post-credits scene totally unnecessary.

While this is happening, Lady Gaga’s song ‘Hold My Hand’, which has come to replace Berlin’s theme in the sequel, begins to play on the soundtrack, and with this music we reach the last scene. We’re back on an airfield like we were in the beginning, but now Maverick and Rooster are together between piloted planes on the photo board with Goose. That’s when Penny arrives in a 1973 Porsche 911 S looking for Maverick (McGillis was driving another 1958 Porsche; Top Gun: Maverick pay attention to all the details). Penny gets out of the car and she and Maverick get into a plane, take off and ‘Hold My Hand’ blasts through the speakers before the credits roll.

They don’t fly in a state-of-the-art fighter, not even an old F-14, but in a traditional plane. If something has come to prove Top Gun: Maverick is that the important thing is the pilot, not the plane. Even Rooster managed to successfully bomb the uranium base despite the glitch of his laser, let’s see how a drone was going to do that.

That Maverick and Penny end up flying a plane after all this means that Tom Cruise is still an action hero who pilots his planes himself, who doesn’t need stuntmen to film his scenes even though everything can now be done with digital effects and that still has an attractiveness that disarms anyone; and it also means that the action cinema inspired by the films of the 80s is still alive and with a future.

The end of Top Gun: Maverick it means, in short, that Ed Harris will have to keep waiting. Technology does not make humans obsolete. Suck that, Admiral.