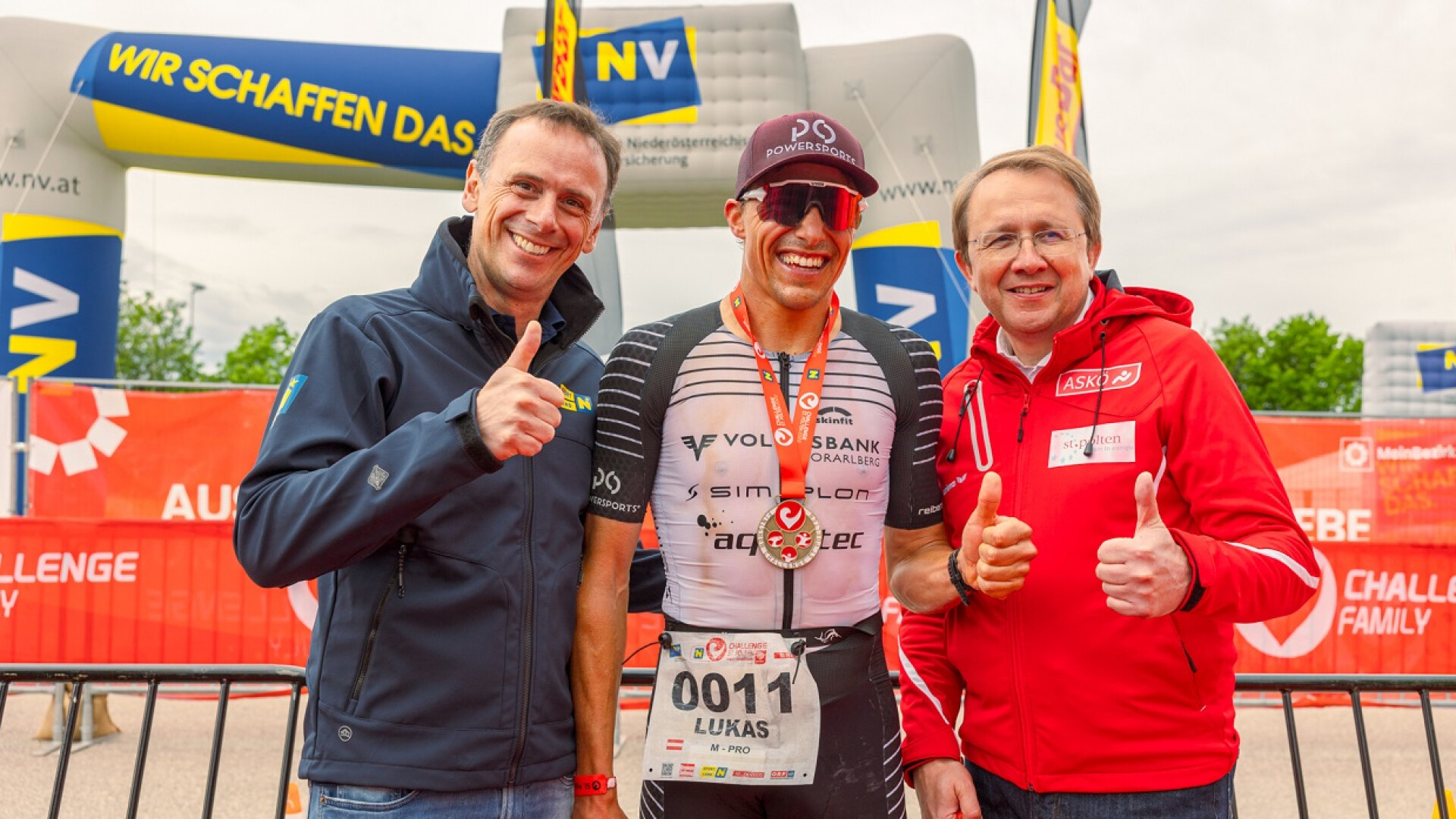 Top event in St. Pölten – Triathlon Challenge: changing of the guard for men and Lucy from the other planet

1.9 kilometers of swimming in the Viehofner and Ratzersdorfer lakes, 90 kilometers of cycling in the Wachau and a half marathon through the state capital were the “challenges” for the 1,500 participants in St. Pölten again this year. With perfect external conditions, the starting gun was fired at 6.30 a.m. for the pro athletes to jump into the water.

In the men’s category there was once again a German winner, but it wasn’t the names mentioned before that came out on top, but youngster Nicolas Mann. Even Nils Frommhold, winner in St. Pölten 2017, who had called at short notice and was still in the lead before the bike climb in Gansbach, was unable to counter Mann’s powerful start. On the contrary, the 36-year-old Frommhold, who was vice-European champion over the long distance in Roth last year, had to pay tribute to his initial pace and in the end, finishing fifth, clearly missed a place on the podium.

For the winner, the previous year was still an apprenticeship year

“Last year I made rookie mistakes, I learned a lot from it,” said Mann, the winner of what was only his fourth middle-distance race. “It just went well from start to finish, even the hammer in the run didn’t come,” he was actually afraid that things could get tight in the finish.
A second young German caused a sensation, at least when he was swimming. At the age of 20, the youngest starter among the pros, Hannes Butters, was the first to climb out of the water ahead of Frommhold, the Australian Caleb Noble and the Austrian Lukas Hollaus. In the end he was twelfth.
Frommhold immediately took the lead on the bike, accompanied by Mann, who had already secured his first place on the podium in the middle distance on Mallorca this season. The all-important attack happened on the notorious Gansbach climb. “I knew that I was no longer allowed to push hard on the whole bike course like last year, but that I could gain a lot more time on the mountain,” explained Mann, who was actually able to quickly extend the lead to over a minute. In the chasing group, the Austrians Georg Enzenberger and Lukas Hollaus fought a remarkable fight for third place with the Australian Noble — as it looked at first.

But while Mann was also striving for an unchallenged victory on the running course and in the end passed the finisher line after 3:45:17 hours and missed the course record from the previous year by only 18 seconds, Frommhold and Enzenberger gradually fell behind. In the chasing field, Noble prevailed on the running course and finished second – just 44 seconds ahead of the Austrian Olympic starter Hollaus, who took third place. Enzenberger was seventh and 41-year-old Gumpoldskirchner Michi Weiss, St. Pölten winner of 2018, was ninth.
In the women’s race, favorite Lucy Buckingham from England managed a lights-to-flag victory, despite competing a middle distance just last week. Only because of a one-minute time penalty imposed a good kilometer before the finish line did it get tight for them in the finish. Australia’s Grace Thek, who climbed out of the water second behind Buckingham but lost a lot of time on the bike, gained almost nine minutes on the run and made for a dramatic finale. The rest of the chasing field with the Polish Aleksandra Jedrzejewska, the German Sarah Schönfelder and the Austrians Gabriele Obmann and Lisa-Maria Dornauer could not quite keep up in this top duel.

In the end, Buckingham won in 4:15:48, 41 seconds ahead of Thek. Both athletes clearly broke the course record of 04:20:17 set by last year’s winner Anne Haug (GER). Jedrzejewska was third and as the best Austrian, Dornauer crossed the finish line in sixth, immediately followed by the chairman. With Katharina Loidl, a third Austrian also made it into the top 10 in the women’s category.
The 30-year-old winner Buckingham, better known to triathlon fans as Lucy Hall because she only got married in January, was not allowed to travel to St. Pölten last year due to Covid regulations. She had to keep her head above water with various part-time jobs, including as a helper in a Covid test street in her hometown of Leeds, and was particularly happy about her victory: “Grace is a strong runner and I knew I had to give everything to the end , to be the first to cross the finish line.”

Registration is already open for next year

Provincial Councilor Jochen Danninger and St. Pölten’s Mayor Matthias Stadler carried out the award ceremony. “I admire everyone who took on this incredible sporting challenge,” said Danninger, himself a passionate cyclist. And Stadler was also happy about a successful event: “It was a great day, great organization, the weather held up and in addition to doing sports, you can also enjoy the beautiful landscape with us – that’s something very special.”
Almost 1,500 athletes took on the three disciplines of swimming, cycling and running in perfect racing weather. More than 10,000 spectators ensured a great atmosphere along the route and in the finish area. And the date for the next Challenge St. Pölten has already been set: On June 4th, a new winner will be chosen. Registration is now possible!