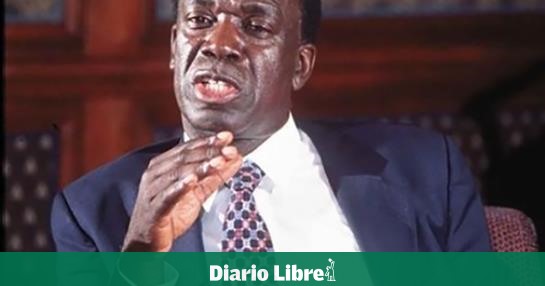 Today marks the 24th anniversary of the death of Peña Gómez

This Tuesday, May 10, marks the 24th anniversary of the physical departure of the politician and lawyer Jose Francisco Pena Gomez. Both the Dominican Revolutionary parties (PRD) and Revolucionario Moderno (PRM) will carry out various activities to honor his memory.

Known as the leader of the masses and for being one of the most prominent figures in Dominican politics of the 20th century, Pena Gomez He was a disciple of Juan Bosch and general secretary of the Dominican Revolutionary Party, mayor of Santo Domingo (1982-1986) and candidate three times for the Presidency of the Dominican Republic (1990, 1994 and 1996).

He cultivated a drinkable career in politics, difficult to imitate, as established by his son José Francisco Peña Guaba, who in an article reveals biographical data of his father.

“Dad must have been a village priest, because there wasn’t even a hint of evil in him,” considered Peña Guaba, who is sincere in saying that his father’s footsteps are difficult to follow: “None of his sons or his disciples carried the suitcase for Jose Francisco Pena Gomezthe load she carries in her is very heavy, wanting to emulate her exemplary life is a colossal task that for petty interests, none of us have achieved “he indicated.

Jose Francisco Pena Gomez was born on March 6, 1937, in Santa Cruz de Mao. Despite having “the color of the night”, Peña Guaba assured that her father was 100% Dominican and his biological grandparents as well.

newborn, the illustrious Pena Gomez He was adopted by a white-skinned married couple who instilled in him values, the Christian faith and taught him to have a special zeal for study and work. These were Regino Peña and Fermina Gómez.

The family economic precariousness in which he lived Pena Gomez forced him to perform the work of shoeshine.

Those who knew him as a young man realize that Pena Gomez stood out for beingstudious, lively, but poorly groomed, because there was always in him from childhood that interest in dressing properly, correct and industrious”.

His intelligence and dedication opened doors for him in life.

Pena Gomez he was a literacy instructor and rural teacher in his village. In 1959 he moved to Ciudad Trujillo, today Santo Domingo, to study speech in Dominican Radio Television and to enroll in the University of Santo Domingo, at the same time he served as a professor at the Loyola polytechnic in San Cristóbal, where he was appointed as a teacher for the excellent recommendations that his teachers made about him.

Pena Gomez he had various facets, he was a singer, a poet, a voracious reader and a polyglot. Those virtues in a man of color “one thing in those times, but with the political spark inside, he assumed an anti-Trujillo line, and the commission of the PRD to the country presented himself in front of Don Ángel Miolán, who, flying like an eagle, recognized in him special gifts, immediately assigning him responsibilities that led him to be the presenter of the first rally that the PRD in the country”, exposes his son Peña Guaba.

He emphasizes that “with his brilliant oratory, he convinced those who saw him that a new star had just been born, thus Professor Juan Bosch, leader in exile of the whites, was immediately made aware of, who since he set foot on Dominican soil placed by your side Pena Gomezassuming him as his main disciple”.

When Professor Juan Bosch resigned from PRD, Pena Gomez assumes the leadership of that party in 1973 and confronted the Government of the late Joaquín Balaguer.

“Only the bravery of my father and his inseparable friends in the PRD They stood up to Dr. Balaguer and rebuilt the party until it became an option for power in 1978, to carry Don Antonio Guzmán on their shoulders to the National Palace.”

Even with his desire to stand out in politics, Pena Gomez he opposed several times to holding office without the popular will. In this way, Peña Guaba recounted what politics was for his father:

“The fiery young leader as dad was called, didn’t love powerhis passion and love was politics, and he was only jealous of his image and leadership, he was from the European school, where the real heads were the leaders, and the government positions were ephemeral or temporary, I can honestly tell you that my father feared that power would denature his criteria, the support and the popular confidence that he would never disappoint, that is why he did not accept the power imposed in the face of the colossal fraud of 1994, in the face of the resolute support of the North Americans, where he expressed to several of us his closest collaborators, ‘that he was not Endara, referring to the former president of Panama’, who was sworn in at a military base in the United States, for similar reasons, but more of a historical nature, he refused the agreement of 2 and 2 with Dr. Balaguer, simple, dad, despite the opposition of many, who wanted him to be President above all, something he refused due to his high sense of history, because he understood that he could not finish his career in an antihistorical Power pact with Dr. Balaguer, he had plenty of reasons for it”.

Peña Gómez’s legacy to his children

“He always gave us advice and called us out when he understood that we were not doing the right thing, he left us nothing materialbecause he had nothing, however he left us a legacy of rectitude, of which all his descendants are proud, I recognize so that my critics do not have to tell me that some, like the one who writes this, we are not possessors of the innate conditions of my father, but with greater pragmatism I was always critical of my father’s meekness and selflessness, since he brought to power people who did everything, even betrayed and apostrophized him, after he took them there and what was the payment received, excuse me on that , because that’s how I let dad know, in life in multiple meetings, my deep differences “.

Peña Guaba points out that none of his father’s children followed his way of doing politics. Some even feel resentment against those people who Pena Gomez he helped and they betrayed him.

“We divided ourselves – the children – and each one went his own way, some with the resentment of knowing that many betrayed him since he raised them to power, and only the humble were always loyal to him, others only used them, and still only used to gain power in his name that has behind him a magical halo of followers, who believe him immortal and who want to be loyal to his principles and legacy..”Jose Francisco Pena GuabaSon of José Francisco Peña Gómez, president of the Socialist Institutional Bloc (BIS) “

24 years after his departure to the world due to pancreatic cancer, Pena Gomez he is remembered and admired, says Peña Guaba, more than many presidents who today are of sad memory.

Pena Gomez He died on May 10, 1998 at his residence in Cambita Garabito, San Cristobalsix days before the congressional and municipal elections where he was running for mayor of Santo Domingo for the second time.

His death caused widespread shock in the country. His wake and funeral was the most attended in recent political history. As a result of his death, the Dominican Government decreed three days of national mourning in recognition of his personal merits and contributions to democracy “, his remains were exposed in the Olympic Stadium.

In his facet as a writer, the authorship of these works is attributed to the late Peña Gómez:

In his honor, the most important airport in the country was renamed from Las Américas International Airport (AILA) to Las Américas-Dr. Jose Francisco Pena Gomez–JFPG.

autobiographical film. In 2015, the film “Del Color de la Noche” by Agliberto Meléndez was released, which traces the life of Pena Gomezfrom the perspective of the difficulty of access of a black person to the place he deserves and of his own fight for equality.

Activities for the 24th anniversary of his death

The Dominican Revolutionary Party (PRD) will hold two events this Tuesday on the occasion of the 24 birthday of the death of their leader, Pena Gomez.

The first activity is a mass at the Las Mercedes church in the Colonial Zone, at 10:00 in the morning. While the second will be the unveiling of a sculpture in his honor in the municipality of Mao, Valverde province, where he was from. Pena Gomez. This act is scheduled for 4:00 in the afternoon on the Duarte highway at the corner of Reverendo Fernando Franco street.

While the government of the Modern Revolutionary Party (PRM), which emerged in 2014 after a division within the PRDwill reopen the Plazoleta Jose Francisco Pena Gomez and will launch the Opportunity 14-24 program in the digital classrooms of the square and the computer meter of the Gualey sector in the National District.

The event will take place on Francisco del Rosario Sánchez Avenue, on the corner of Padre Castellanos, and will include the participation of President Luis Abinader.