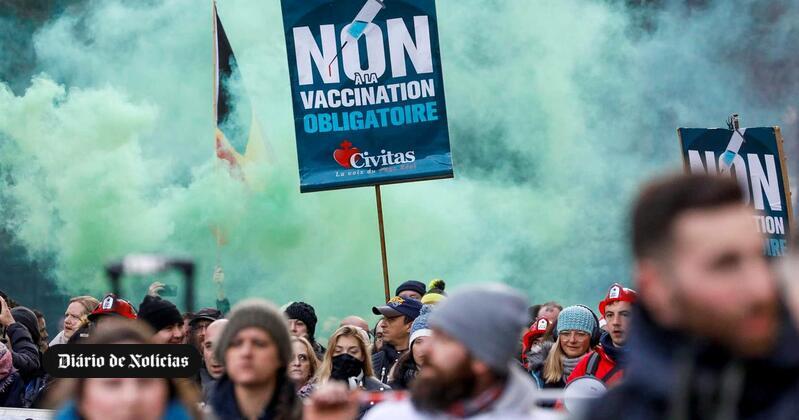 Thousands of protesters marched in Brussels to oppose the rules to combat the coronavirus. There was no repeat of the violence that marked the previous and larger demonstrations in the Belgian capital, although police intervened to surround a small group that approached the European Union headquarters.

As he marched through the city, the crowd – 5000 people according to the police – chanted “freedom, freedom!” and brandished banners denouncing what they called a “vaccine dictatorship.”

Before the march began, police arrested 11 people for carrying fireworks. 30 more arrests were made at the end, after a small group threw “projectiles” at the police.

Belgium requires residents to present the digital certificate to enter bars, restaurants and cultural events, and there have been several recent street protests.

On Sunday, health minister Frank Vandenbroucke called in a televised interview for a parliamentary debate on tighter rules as Belgium sees Covid cases soar with the spread of the Ómicron variant.

“People’s opinion is changing. A year ago, I said: mandatory vaccination is not a good idea, we need to convince people. Now, knowing that we really need to vaccinate 100% of the population – which was not our idea a year ago, we thought 70% was enough – we still need some acceptance”.

But that support would not come from the protesters, waving flags from a diverse set of political groups, but united in opposition to mandatory measures.

“It’s completely absurd crisis management that hugely affects freedoms and will lead to a Chinese-style system if we let that happen,” a protester told AFP.

Previous demonstrations degenerated into battles with police, who in recent weeks have used tear gas and water cannons, but Sunday’s protests ended in a relatively orderly fashion. Riot police erected barbed wire barricades across the roads leading to the European Union headquarters buildings and deployed drones and two trucks with water cannons.

In Prague, in another language, but the same word, freedom, was shouted by the protesters. Here, activists moved against the proposal to make vaccination mandatory for people over 60 years of age and holders of certain professions, such as medical personnel, police and firefighters.

The measure had been outlined by the previous government. The current one, resulting from a five-party coalition led by Petr Fiala, is inclined not to oblige the elderly to be immunized, but will want to keep the vaccine mandatory for professional groups.

In the Austrian capital, Vienna, the protest took place on Saturday and gathered about 40,000 people. The crowd protested against plans to make the Covid vaccine mandatory starting in February. Austria resumed confinement in November and managed to stem the number of infections, but new cases have multiplied since then, including the new chancellor, Karl Nehammer, 49, who announced he had tested positive on Friday.

In Germany, protests and counter-demonstrations were reported in several cities such as Hamburg or Frankfurt. In the port city thousands of people came together to challenge the mandatory vaccination of health service personnel and nursing home workers.

In Dresden, thousands of people took to the streets to demonstrate against the increasingly violent demonstrations of anti-vaccination groups.