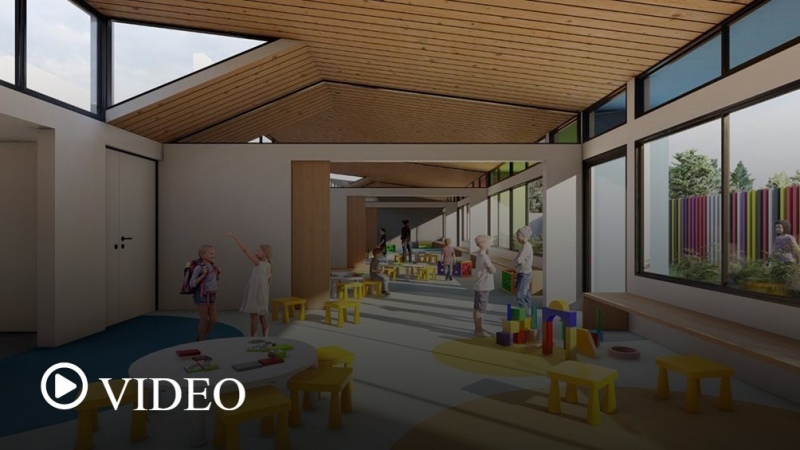 Flexible classrooms in size and shape that adapt to the health and educational requirements of the future, air conditioning to prevent the circulation of viruses, use of renewable energy, ecological construction and facilities open to community use, are some of the characteristics of the new school that the Santa Fe government will build for post-pandemic times.

The Secretary of Public Works of Santa Fe, Leticia Battaglia, told Tlam that “with this building model we are ahead of time“, and assured that” it is the school of the future, today. “

“It is an architectural building that responds to the spatial and health challenges posed by the pandemic, and it is a model that can be replicated by adapting it to each terrain and each community,” he said.

In that sense, he specified: “We incorporate outdoor green spaces into the project, spacious environments with cross ventilation and natural lighting, always thinking about the experience and care that the pandemic leaves us.” “We want children to grow and learn in safe places and with the lowest possible risk, “he remarked.

Battaglia said that it was the governor of Santa Fe, Omar Perotti, who presented the challenge to “return to the classroom, attending to the new needs that the pandemic brought to the areas of socialization.”

Immediately, the interdisciplinary team that makes up the local Public Works area began to analyze different models and theories, “we read the psychopedagogue Francesco Tonucci, who expanded the way of thinking about the educational space and then we went further back in time and We saw the Montessori Method applied in Argentina by the Eva Pern Foundation“, relat.

“The Italian doctor and educator, Maria Montessori, came to Argentina from the hand of Evita and from that moment on, Home Schools emerged that have healthy environments without ecology being developed at that time, they have highly ventilated environments. size, among other avant-garde characteristics for the time, “he reflected. 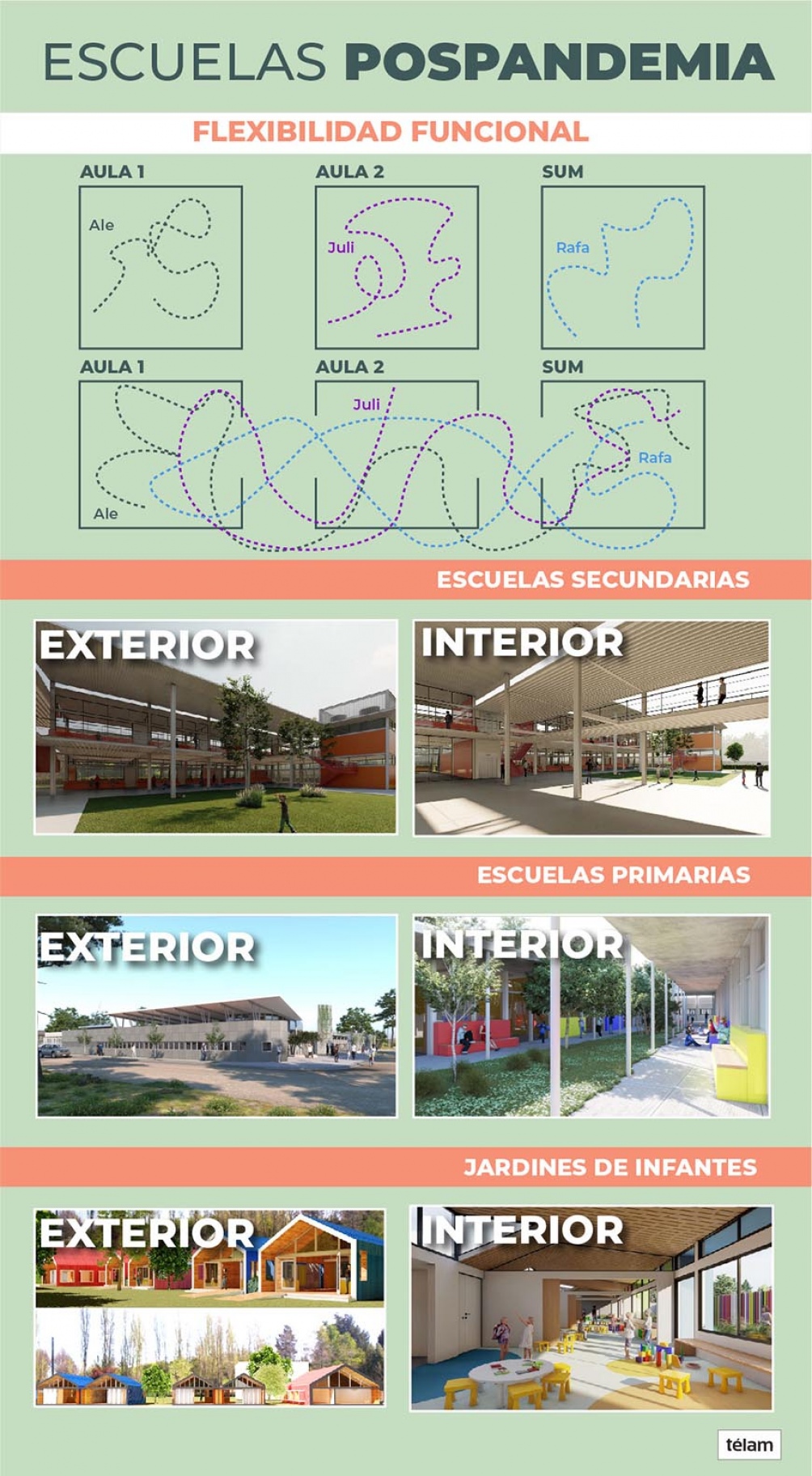 “What we did was get inspired by the Montessori method based on granting freedom to students but with responsibility, and adapting it to architecture with new technologies, with constructive efficiency and optimizing it with environments designed from the problem of the pandemic, “he explained.

The work of more than 300 million pesos It was put out to tender on April 27, its construction anticipates a period of 8 months and begins in the first days of July in the town of Roldan, located in the southern part of the province of Santa Fe, 23 km west of the city. of Rosario.

Building house 200 students, have two floors where 14 classrooms of 7.20 meters by 7.20 meters will be located, and cover 1,355 square meters considering green and semi-covered spaces.

It is a new post-Covid-19 architectural paradigm for schools that will have new spatialities designed under four basic principles such as extensive and intensive use of the building, functional flexibility of the classrooms, healthy environments and efficient or ecological construction. 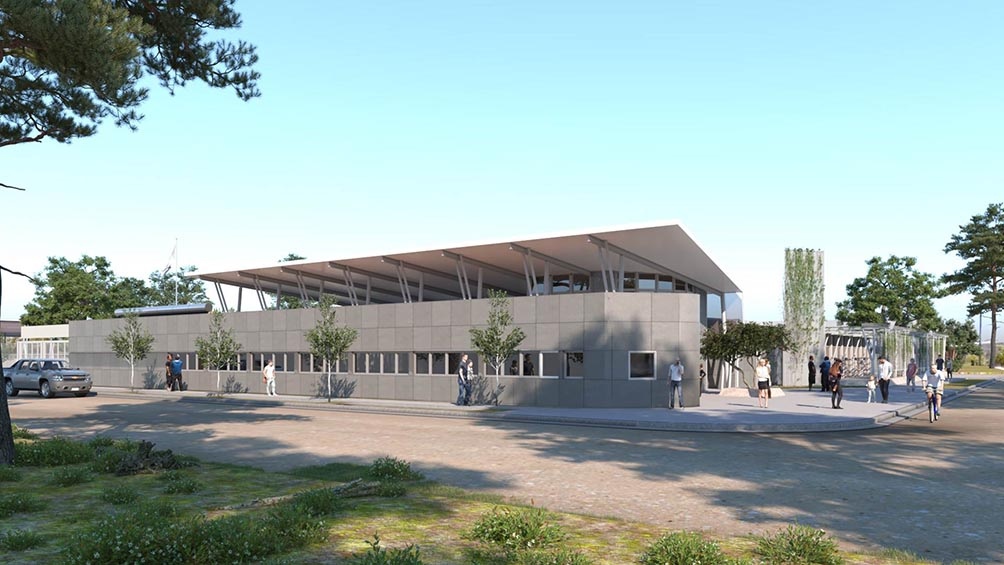 Officials from other provinces of the country have already shown their interest in replicating the model in their territories.

The new school count on flexible classrooms called multiple activity spaces (EMAS), which will have the ability to double or triple in size according to the number of students or the activity that arises in class, as indicated by the authors of the initiative.

“We designed them,” Battaglia explained, “with a system of folding and sliding doors to achieve a dynamic organization of the space within the classrooms that will no longer show the typical arrangement of the desks in a row looking at a blackboard, but multiple arrangements of furniture and equipment. students”. 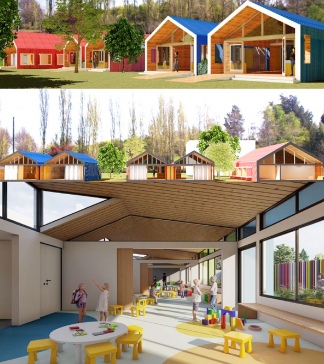 In addition, the official told Tlam they sought to achieve healthy environment standards, “an issue that is seen in their design that prioritizes that they always have plenty of natural light, cross ventilation and are surrounded by nature”, that is why the openings “allow a direct connection to open and covered patios to be able to teach classes outdoors free”.

In case you need to close the windows, air renewal is guaranteed “As is done in hospitals to inject fresh air and remove stale air that can carry pathogens due to the demands of the pandemic,” he explained.

The building will be heated with radiant floors and solar energy, and the roofs will have a “Rain Harvest” system, which collects rainwater to be used for sanitary and irrigation use. 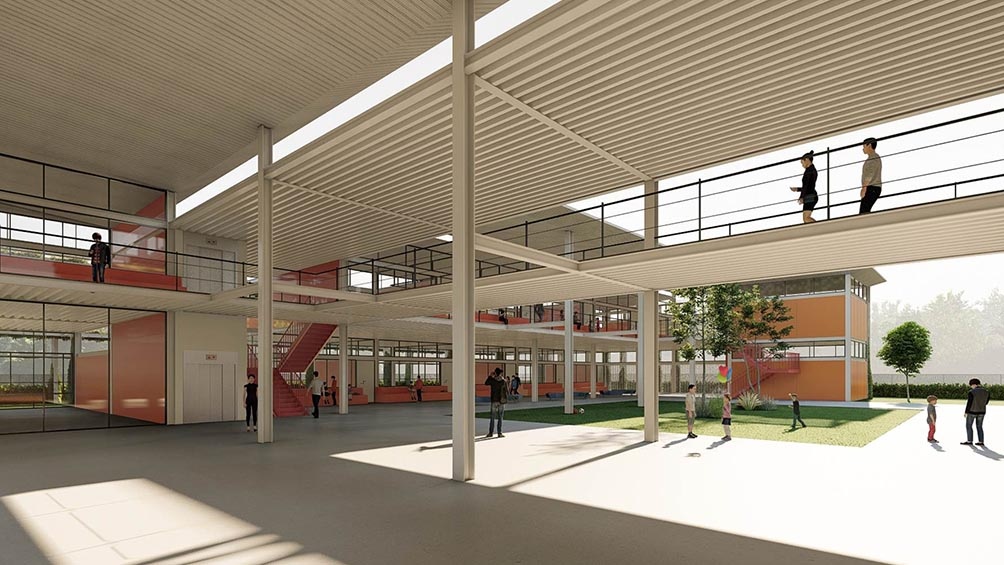 “We also proposed that this model school could be of extensive and expansive use 24 hours a day. We want the educational community to be able to make use of common spaces such as multipurpose rooms, the canteen, the sports beach or libraries, “noted Battaglia.

The model school It will be carried out under the concept of efficient construction. “We will use recyclable, non-polluting materials, the glass will have solar control sheets and thermal bridge breakdown so that there is no condensation. All the technological details have been thought out to achieve an efficient building.”

“Our school have hot water, something unusual in public schools. Being able to wash your hands with water that is not ice cold in winter may seem irrelevant but it is not, especially with what is necessary for hygiene in a pandemic, “he stressed. 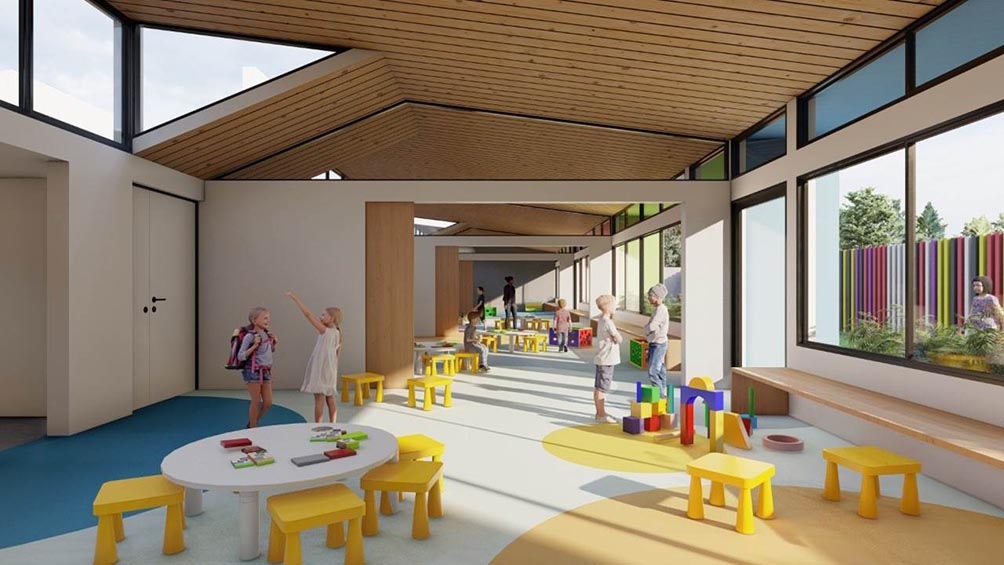 The Santa Fe government reported that some 17 kindergartens will be put out to tender in the next few months throughout the province.

The Santa Fe government reported that about 17 kindergartens will be tendered in the next few months throughout the province and also a secondary school in the town of Zavalla, another in Funes and a primary school in Pueblo Esther.

Being the first school institution of its kind developed from the State with public investment, officials from other provinces of the country have already shown their interest in replicating the model in their territories.