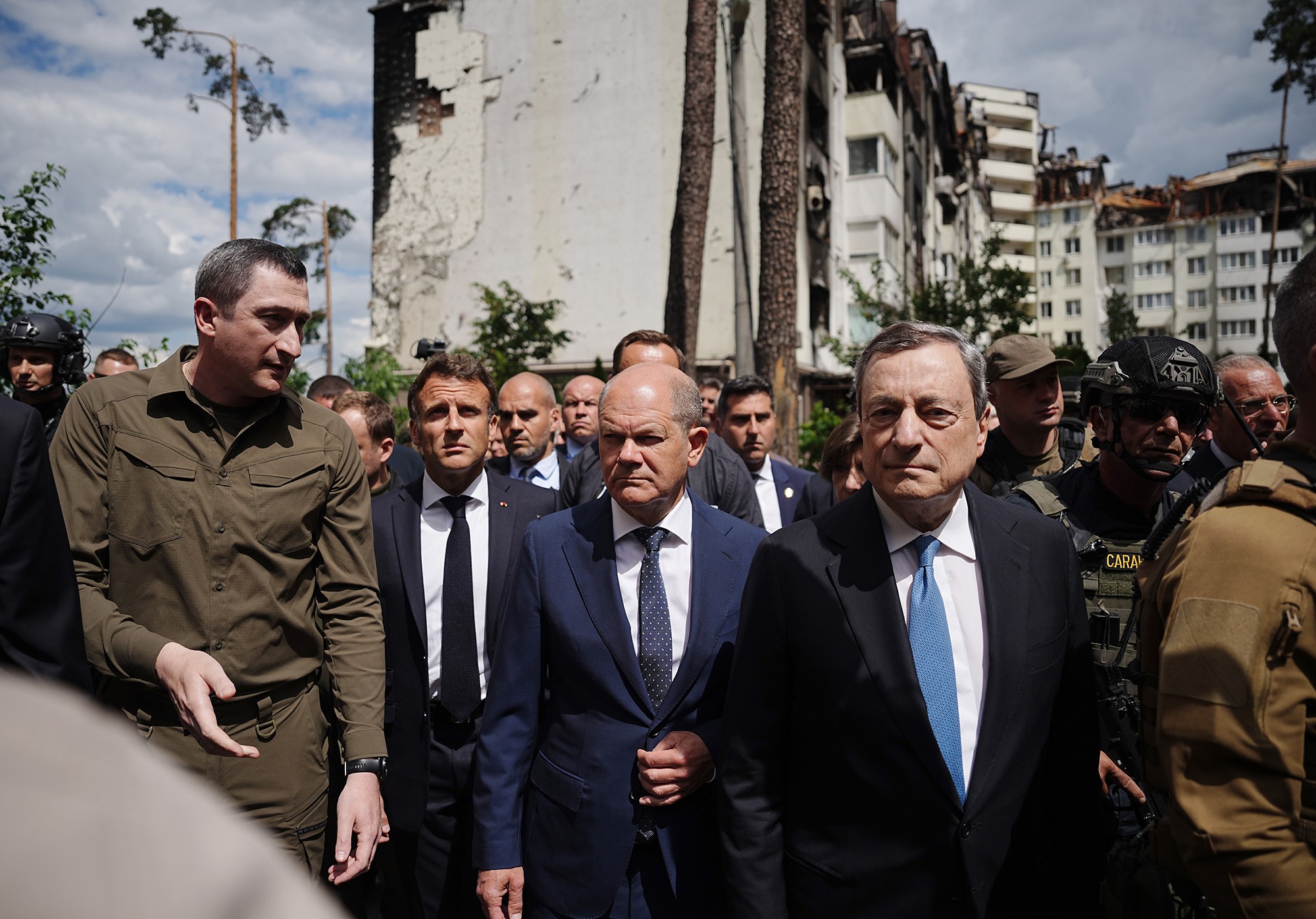 This Thursday’s news roundup of Russia’s war in Ukraine

(CNN Spanish) — As Russia intensifies its attacks in eastern Ukraine, President Volodymir Zelensky will receive strong political backing on Thursday with the arrival in Kyiv of the leaders of Germany, France and Italy.

See the most important news of the war this Thursday.

Leaders of France, Germany and Italy meet with Zelensky in Kyiv

Three high-level European leaders arrived in Ukraine’s capital Kyiv on Thursday amid the war with Russia, CNN’s team on the ground confirmed.

The meeting with President Zelensky with Macron, Scholz, Draghi and Iohannis began around 8 ET, according to a photo posted on Telegram by an adviser to Ukrainian Interior Minister Anton Gerashchenko.

“Busy day. Important meetings,” Zelensky said through his official Telegram channel, adding that he is delighted to meet these leaders.

After the meeting with Zelensky, European leaders made public their strong support for Ukraine, particularly its possible entry into the European Union.

Chancellor Scholz stated that Germany is in favor of a positive decision for the Ukrainian candidacy to the EU and that Ukraine “belongs to the European family”, during a press conference held on Thursday in Kyiv.

“My colleagues and I have come to Kyiv today with a clear message: Ukraine belongs to the European family,” he added.

A milestone in what is likely to be a long European road is the status of a candidate for accession. The Member States of the European Union will discuss it in the coming days. We know that unanimity among the 27 EU countries is necessary,” Scholz said.

“Germany is in favor of a positive decision for Ukraine, also for the Republic of Moldova,” he added.

See the power of the M-4 rifles donated by the United States to Ukraine 2:44

Scholz added that all candidates had to meet the ascension criteria relating to democracy and constitutional law.

“We also support Ukraine by supplying weapons, and we will continue to do so as long as Ukraine needs our support. We are currently training the Ukrainian military in state-of-the-art weapons, the 2000 self-propelled howitzer and the Gepard anti-aircraft tank. In addition, I have agreed to supply the modern Iris-T air defense system, which can defend an entire city against air attack, and special radar,” Scholz said.

See also  How did Alexis Medina obtain irregular contracts for more than 1,500 million with Oisoe, according to the MP?

Macron expressed himself in the same sense. “The four of them [Francia, Alemania, Italia y Rumanía] we support the status of immediate candidacy for accession. This status will be accompanied by a roadmap and will also entail taking into account the situation in the Western Balkans and in the neighborhood, in particular Moldova,” Macron told Zelensky.

“Europe is by your side, it will continue to be as long as necessary, until victory is achieved, a victory that will see the return of peace in a free and independent Ukraine,” Macron added.

Macron also said that the current world food crisis was a “direct consequence of the war waged by Russia”, and called on Russia “to accept that the United Nations organize the export of grain, which requires the lifting of the Russian blockade and offers all security guarantees to Ukraine to allow the exit of these grains in the Ukrainian ports”.

As if to remind them that they were visiting a country terrorized by an unprovoked attack, air raid sirens sounded shortly after the three leaders arrived at their hotel in central Kyiv.

Although all three countries have promised weapons to help Ukraine’s defense against Russia, Zelensky has made no secret that he believes they are not doing enough.

He has been especially critical of Scholz and Macron, going so far as to suggest that both leaders were trying to appease Russian President Vladimir Putin.

“[Scholz] and its government must choose not to make a balancing act between Ukraine and the Russian Federation, but choose what their priority is,” Zelensky told German broadcaster ZDF earlier this week.

Zelensky has also had harsh words for Macron. The French president has tried to present himself as both an ally of Ukraine and an honest broker with Russia.

Macron, in an interview earlier this month, said “we must not humiliate Russia so that the day the fighting stops we can build an exit ramp through diplomatic means.” I am convinced that France’s role is to be a mediating power.”

Zelensky told the Financial Times that “to be a leader, you don’t have to think of yourself as one, you have to behave as one.”

Kremlin spokesman Dmitry Peskov told CNN on Thursday that Russia plans to resist Western sanctions and complete its targeting in the Donbas region of eastern Ukraine.

Asked about Russia’s intention to occupy parts of Ukrainian territories in Odessa, Kharkiv and Kherson, Peskov said the decision would depend on the “will of the local population.”

“The number one goal is to protect the population of Donbas and Luhansk from those who are bombing Donetsk, for example, right now, and killing civilians there. And they have been doing it for the last 8-9 years,” he told CNN’s Fred Pleitgen.

See also  A forest fire in California destroyed a city with a 150-year history in two hours: Incidents: World: Lenta.ru

“As for other territories and regions of Ukraine, you know, the more our military cleanses the territory of those nationalist regiments, the more people welcome them, and the more people declare their desire to interrupt their future life with the modern Kyiv regime,” he said. .

Peskov said Russia poses no threat to the Baltic states and Finland, which announced their intention to join NATO last month, breaking a decades-old military non-alliance in the wake of Russia’s invasion of Ukraine.

How many missiles have hit Ukraine since the beginning of the war? 0:57

“We are sure that the entry of Finland and Sweden into NATO will not bring any additional benefit to the security of the European continent. On the contrary, it will bring additional tension,” he said.

The spokesman admitted that Moscow is not in a “comfortable position” after the West’s “unprecedented” economic sanctions against Russia, but said that “the crucial effect” of the sanctions that the West expected “did not come”.

“Now we feel even a little better than you might think,” Peskov said, adding: “Of course, we understand our problems, we understand that in a very short time we will have to compensate for the fairly significant decrease of more than 40%-45 % on imports,” Peskov said.

He said Russia is planning a “very serious boost” to its domestic production and infrastructure.

“All of this is very possible because our world is very big and very rich,” he continued.

“They thought they would be in the center of Kyiv in 12 hours,” he said the document said.

The Russians naively foresaw that within 72 hours the Ukrainian government would flee the capital, Reznikov said.

“Frankly, our partners in the different capitals of the world were also naive. They told us that the invasion was imminent, and that you would fall. You only have 72 hours. That’s why they didn’t give us heavy weapons.”

Only after Ukraine liberated the Kyiv region in late March did Western partners start providing Ukraine with heavier weapons, he said.

During the interview, Reznikov also said he was told by Western defense officials that their military support for Ukraine “will never stop.”

See also  The terrorism alert triggered in the Vatican

The official said US Defense Secretary Lloyd Austin, UK Defense Secretary Ben Wallace and other Western officials told him: “Oleksiy, don’t worry, we won’t stop. We will continue to help your country, your people and your president,” he said.

“I heard it yesterday and I felt it with absolute sincerity, I saw Lloyd Austin’s eyes, for example… I saw the real realization that they will never stop,” Reznikov said, when asked if America’s long-term commitment with Ukraine is sustainable.

He stated that the promises of the United States and the West are not only of military support, but also financial, economic and political.

“I believe that [los aliados occidentales] have decided that they want to be partners in this victory,” Reznikov said.

The Ukrainian defense minister told CNN that Western allies now understand that the idea of ​​not provoking Russia to avoid conflict does not work.

NATO now views Russia as an adversary and not a strategic partner, he said.

China will support Russia on security, Xi tells Putin on his birthday call

Chinese leader Xi Jinping reiterated his support for Moscow on “sovereignty and security” in a call with his counterpart Vladimir Putin on Wednesday, maintaining his support for the countries’ association despite the global backlash against the Russian invasion. from Ukraine.

On his 69th birthday, Xi also pledged to deepen strategic coordination between the two countries, according to the Chinese Foreign Ministry.

A separate Kremlin reading said the two leaders stressed that their countries’ relations “were at a critical point” and reaffirmed their commitment to “consistently deepen the comprehensive partnership.”

The call is believed to be the second time the two leaders have spoken since Russia invaded Ukraine. They also spoke just days after Moscow launched what it insists it calls a “special military operation.”

China has also refrained from referring to Russia’s actions as an invasion and has walked a fine line on the issue. It has been presented as a call for peace and the defense of world order, while refusing to denounce Russia’s actions. It has also used its state media apparatus to mimic Kremlin lines by blaming the United States and NATO for the crisis.

During Wednesday’s call, Xi stressed that China had always “independently assessed the situation” in Ukraine and called on “all parties” to push for a “proper solution to the Ukrainian crisis,” echoing the language he used in a March call with US President Joe Biden.

China is “willing to continue to play its role” in promoting a “proper solution” for Ukraine, he said.

The Kremlin’s summary of the call took this position a step further, saying: “China’s president noted the legitimacy of Russia’s actions to protect core national interests in the face of challenges to its security created by external forces.”