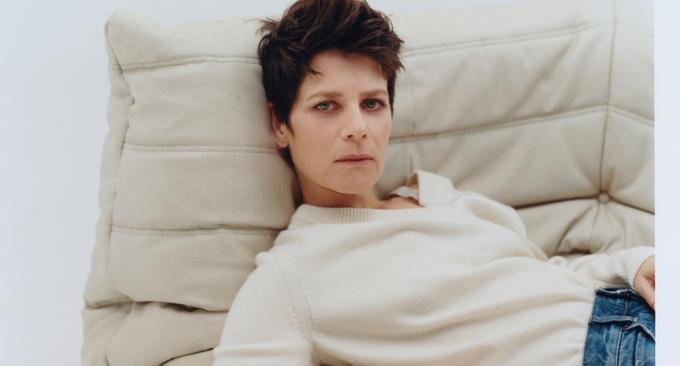 “This profession is made up of small shames, but they don’t always go where you imagine them”

In Jérémie Elkaïm’s first film, They are alive, inspired by a true story, the actress plays the widow of a policeman, sympathizer of the FN, who falls in love with an Iranian refugee. A strong role that she carries body and soul.

This year will be his, with no less than five films expected, notably under the direction of Éric Lartigau, Rodrigo Sorogoyen or the Boukherma brothers, in a killer shark film. But it is with the first film by actor Jérémie Elkaïm that Marina Foïs opens the ball. In They are alive, adapted from the true story of Béatrice Huret told in the book Calais my love, the actress becomes the widow of a policeman and FN sympathizer, who has fallen in love with Mokhtar, an Iranian teacher who has taken refuge in the Calais jungle. More involved than ever in this project escaping the thesis film, the actress tells us about this improbable but lasting romance in which politics is told through bodies, looks and action.

Read alsoMarina Foïs: “Keeping your distance between movie people who are used to all sleeping together, it’s complicated!”

In video, “They are alive”, the trailer

Madame Figaro. – How did this film that you initiated come about?
Marina Fois.– From a tweet that caught my attention: “An FN activist falls in love with an Iranian refugee in the jungle of Calais.” I got the book by Béatrice Huret in which I immediately saw the possibility of a film: the fall is very often dealt with in the cinema, but much less the opening, the path towards the light. I liked it all the more because the book is not the political-initiatory journey of a “woman who has understood things”, but the story of an encounter which, without it being intellectualized, changes everything. .

Why did you choose Jérémie Elkaïm to direct you?
He had started writing with Maïwenn who, before retiring to concentrate on her films, was to direct. Jérémie naturally imposed himself thanks to the intimate, daily look he casts on this story of otherness. Today, we are constantly being told what divides us and keeps us apart, we justify turning in on ourselves, we feed fears… But this story, like so many others, is proof that humanity survives and can prevail.

It also recounts the rebirth of a woman who reclaims her body and her life…
Béatrice puts pleasure back into a daily life that was very painful. On paper, everything separates her from Mokhtar: their cultures, their ideas, their language… The only language they share at the beginning is that of the body. It’s also rare and beautiful to film the desire of a 35-year-old man for a 50-year-old woman to whom he gives pleasure, sometimes without expecting anything in return.

How did you approach these intimate scenes?
I have a strange relationship with that. I feel like I have a shooting body that doesn’t really belong to me. This job is made up of small shames, but they don’t always fit where you imagine them. Singing – off-key, moreover – would be more distressing to me than a nude or sex scene.

Did you meet any ex-jungle workers for the role?
I already knew some, especially through my mother who is a volunteer shrink for La Cimade, the NGO that defends the rights of refugees and migrants. I’m not as engaged, but I’m not completely western. And then my maternal grandfather was Russian, married to an Egyptian, my father was German-Italian, a researcher in physics… The reception was very different for this bourgeois emigration, but exile is a central subject in my family. I am not sensitive to the flag, I find the concept of border absurd and I have never understood that we can prioritize human beings or lack empathy in the face of these men and women forced to leave their loved ones, their homes , their work…

Defending your convictions depends above all on your roles?
Actors are in their place when they make films. I like the discourse when it is articulated, and I take politics too seriously to speak outside the framework of my job on subjects that I do not know enough about. There was a time when the word of artists guaranteed something and could serve the public debate. Today, it is necessarily considered illegitimate and above ground. So I try as much as possible to be in the right place: I am neither a lettuce nor an activist, but I believe more in action, in the gift of money and of oneself.

They are alive, by Jérémie Elkaïm, with Marina Foïs, Seear Kohi, Lætitia Dosch…