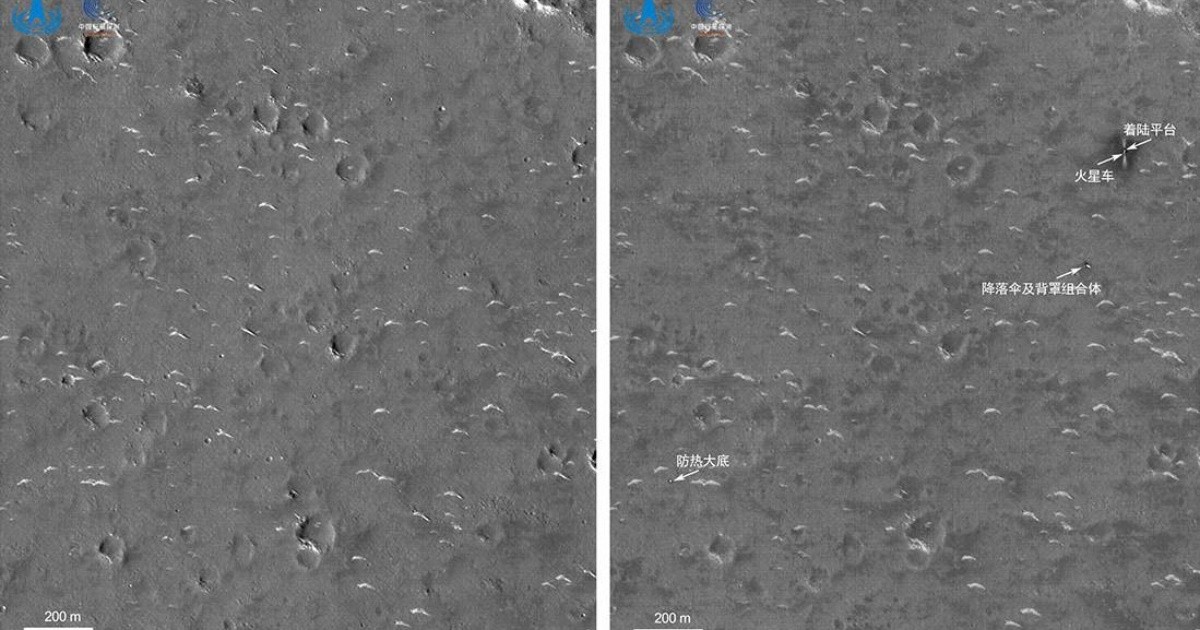 The space agency of the Asian giant published high-quality photographs showing the moment before and after the descent of the probe on the Martian surface. Sight

The China National Space Administration shared high-definition photos of the before and after time from the landing site of the Tianwen-1 mission to Mars.

The images show the rover Zhurong, which reached the surface of the red planet on May 15 and a week later began its exploration tasks in the southern part of Utopia Planizia. he showed the barren Martian landscape around him.


As published RT, el róver Zhurong study geological structure, environment, atmosphere and water from the red planet for a minimum of 90 days.

The Tianwen-1 probe was launched on a Long March-5 rocket on July 23, 2020 from the platform located at the Wenchang Satellite Launch Center, Hainan province, in the south of the country.

The reasons why vaccinated people die from coronavirus

Alarm for scams with emails from a bank and through the Marketplace: accounts are emptied and loans released

Official: now Lucas Bernardi is the new manager of Newell’s

They threatened them and shot a car: “Justice is responsible if something else happens”

Fans donated by Messi stranded at the airport: why they do not authorize entry

Fixed prices: doubts in Rosario supermarkets about their implementation

Google announced the arrival of an innovative submarine cable to Argentina

The government regulated the Sizing Law: what does it consist of?

Carlos Reutemann continues with a reserved prognosis: he was transferred to coronary artery disease

The Anmat banned the manufacture and sale of gluten-free oats

Carla Vizzotti: “There are people who decide not to get vaccinated because of the lies that are told”

Samid, from Chicago 9 to pessimistic Peronist: “Argentines are like our national team”

Fans donated by Messi, stranded at the airport: “Today they can be useful in the guards”

Video: he was furious about a car that blocked the entrance to his property and he took it out with the tractor

She was a stockbroker, became a model and makes thousands of dollars thanks to a trick with her breasts

Brazil: the fireball seen in the sky could have an interstellar origin

Email scams: “These mafias use more sophisticated systems and anyone can be a victim”

When are June holidays ?: a long weekend and yapa on Father’s Day

The weather in Rosario: humidity, fog and drizzles; the fall combo

United States: Free marijuana cigarettes offered to those vaccinated against the coronavirus

Do you want to receive notifications from our site?