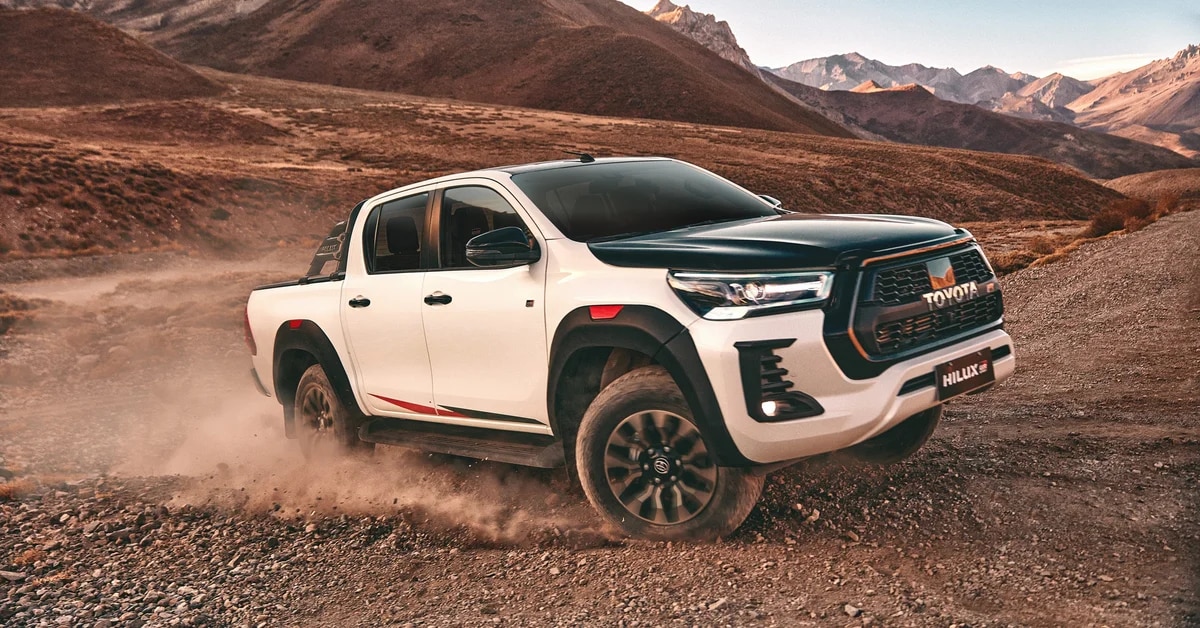 Hilux GR-Sport III is the new bet inspired by the success of Toyota Gazoo Racing in Dakar (Credit: Toyota Press)

Toyota Hilux is one of the legends of the Dakar Rally and one of the models that achieved victory in the toughest race in the world. The success achieved by Toyota Gazoo Racing in the Dakar inspired the creation of the new Hilux GR-Sport III.

This new version of the pick-up, a product conceived in Argentina and produced at the Zárate plant to be marketed throughout Latin America, was developed for use mainly off-road on dirt roads at high speed.

It is equipped with a 224CV 2.8-litre 4-cylinder in-line diesel engine with variable geometry turbocharger (TGV) and intercooler (1GD), coupled to a 6-speed automatic transmission. It also presents improvements in the suspension, which give it an outstanding dynamic performance, as well as a renewal in its exterior and interior design.

The spirit of the new Hilux GR-Sport seeks to further expand the dynamic performance, with strong power and suspension improvements, designed to provide greater capacity and robustness when handling and traversing the most difficult terrain.

Its mechanics are combined with the 4×2, 4×4 and reduced 4×4 traction system, with electronic actuation, automatic differential disconnection, and active traction control. This set delivers brisk acceleration, with more agile reactions, giving the vehicle a marked sporty character.

Thanks to these improvements, both in conditions off-road as on-roadthe driver gains a greater degree of confidence and safety behind the wheel, especially on low-grip roads such as dirt and gravel.

The exterior aesthetics present a sporty yet sophisticated image, maintaining the distinctive spirit of other Toyota Gazoo brand models. On its front, the grille with the Toyota logo is complemented by the “GR” emblem. The side details are concentrated in the lower area of ​​the doors, leaving more free surface on the sides and maintaining a cleaner image, without losing the sporty impetus of the model. Extended fenders with black overfenders, door handles, mirrors and a sport bar contrast with the body colors and add a look that enhances its character.

The interior combines sporty features with the characteristic comfort of the line. Its sports front seats are upholstered in a combination of natural and ecological leather combined with perforated synthetic suede and red details.

The interior atmosphere is completed with the headliners and pillars in black, creating a more sporty environment and where the distinctive features of the Gazoo Racing brand stand out, such as the ignition button, the key, the identification plate with the number of unit, the headrests, the aluminum pedalboard and the exclusive carpet covers of this model.

Regarding its equipment, the Bi-LED headlights with “Follow me home” and automatic height adjustment, Led taillights and LED daytime running lights (DRL), navigator incorporated in the JBL multimedia system with 8″ touch screen stand out. and 8 speakers and subwoofer, Smart Entry System that allows you to unlock the doors simply by pressing the button on the door opening handle, by keeping the smart key in your pocket, also facilitating the vehicle starting operation with the Push Start Button System.

From Zárate to all of Latin America, the new Hilux GR-Sport (Credit: Toyota Press)

Regarding passive safetyits equipment is 7 airbags (frontal for driver and passenger, knee for driver, side for driver and passenger, and curtain with coverage for front and rear seats), height-adjustable 3-point inertial seat belts with pretensioner and force limiter. Also head restraints for the 5 occupants, alarm and unfastened belt indicator for all seats and ISOFIX anchorages and fixing with supports for the upper strap.

Exterior color options are in line with those that identify Toyota Gazoo Racing: Mica Black, Metallic Red and Pearl White. These last two options present a two-tone alternative with a black roof and bonnet.