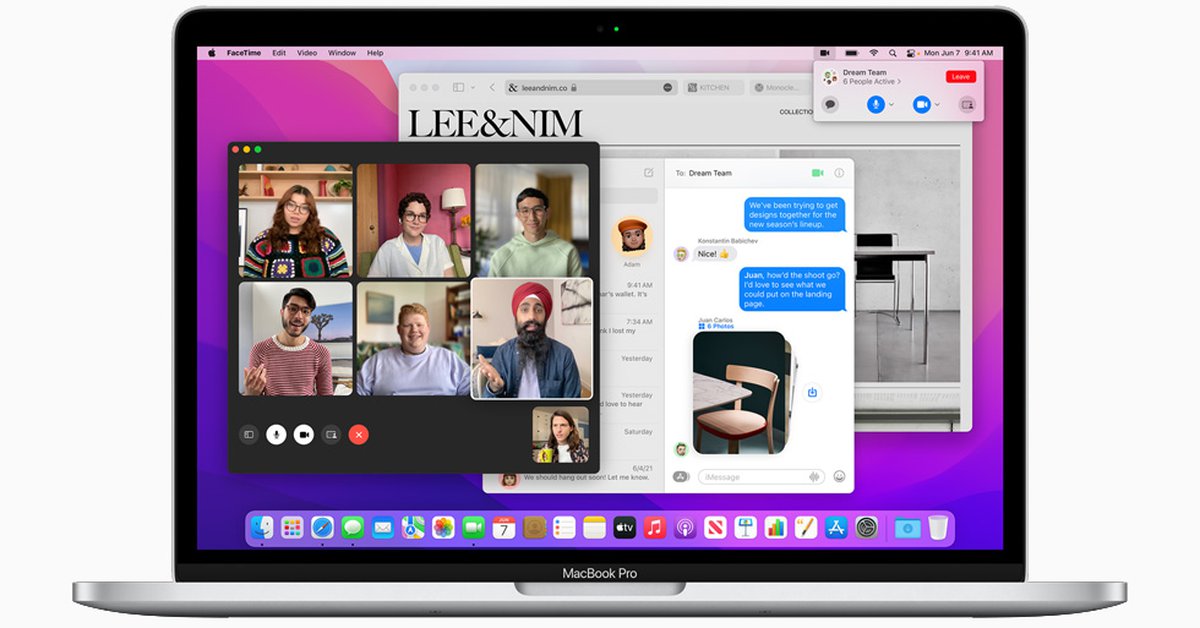 With SharePlay, users can share their movies, TV shows on FaceTime

In the coming months, the beta of the new version of Apple’s desktop operating system, called macOS Monterey. This was pointed out by the company during its annual event for developers WWDC 21. This version will come with new features that will allow users to share their computer mouse and keyboard with an iPad, includes a redesigned version of the browser Safari and new multitasking functions.

The new operating system will have most of the new features of iOS, such as concentration mode Focus, for example. These are new features to help keep users focused, with a new design of notifications, and summaries generated through AI (artificial intelligence) so that the user is updated with important notifications, which do not come from other people, which are kept apart, among other points.

Another of the functions that macOS Monterey will have is the FaceTime collaborative vision, that is, the grid view (Grid View) that with AI will block the ambient sound and will add this format, such as Zoom, of mosaic.

Regarding the exclusive novelties for the Mac operating system, the continuity function stands out, through Universal Control. Allows actions like opening a program by dragging it aside, connecting for example an iPad and a MacBook automatically. This function works in a multitasking mode with several screens, to control them all with the same mouse. This means that the software itself will support multiple Bluetooth profiles, without the need for a special keyboard, to manage 2 or 3 devices.

READ  The new Forza Motorsport will be "a great generational leap"

In addition, the new version of macOS Monterrey improves the shortcuts of Shortcuts, which automates daily work to improve productivity, with repetitive actions in various applications. Automator, the previous app for shortcuts, will continue to be supported in a transition that “will last several years”, as recognized by Apple’s vice president of software, Craig Federighi.

Through Universal Control, macOS Monterey allows actions such as opening a program by dragging it aside, connecting for example an iPad and a MacBook automatically.

For its part, Safari will feature a major update, with a redesign that includes an optimized tab bar and organization with Tab Groups, too. In this sense, Apple seeks to make its browser simpler and functional for the user. It will seek to end the “infinite tabs” that distract users with tabs that will serve as temporary markers grouped in thematic folders in the Safari sidebar.

Also the number of visible buttons next to the URL box is reduced, which will be integrated into a single ellipsis button. The result is a much cleaner and more interesting design than the one the application already had by default.

The devices that will be able to install macOS Monterey in the coming months (probably in September, there is a beta for developers today, and in July there will be a public beta for users) are: iMac, Mac Pro, iMac Pro, Mac Mini, MacBook Air, MacBook y MacBook Pro.

On the other hand, Apple introduced the new version of its operating system from Apple Watch watches to the new version watchOS 8. The company has incorporated new functions to improve relaxation, such as animations and a new application for mindfulness, as well as the ability to detect the user’s respiratory rate while sleeping, along with the Health app.

READ  With dark mode, but without Microsoft Bing

The new watchOS 8 system also adds new training routines – Tai Chi and Pilates – within the Fitness + subscription service for physical exercise. The Photos app for Apple Watch has new skins to turn images into wallpapers, or keyboard features to access emojis in iMessages. This operating system will be available this month.

iOS 15: New feature to improve concentration and switch FaceTime to be more like Zoom
WWDC 21: all the news that was presented at Apple’s annual developer event