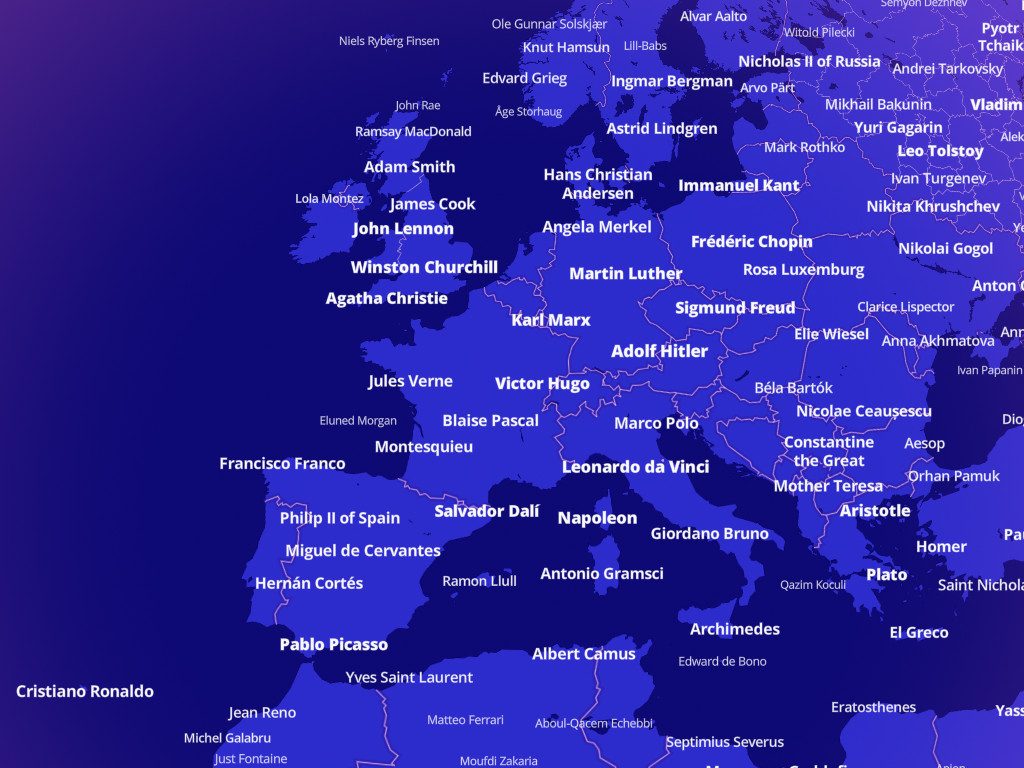 This interactive map shows the most famous person in your city

A geographer decided to create an interactive map that lists the origin of the most notable people around the world. The opportunity to discover the most remarkable individuals in your city.

This interactive map created by Topi Tjukanov, geographer and map designer at Mapbox, allows you to visualize at a glance the origins of the most notable people in your country, your region and even your city. We take pleasure in walking around the map to satisfy our curiosity. A tool that is both practical and much more fun than the interactive map of average rental prices in France.

Do you share the origins of certain famous people?

You may have had fun looking at which personality was born on the same day as you. Information relatively easy to find, but which has its limits. Topi Tjukanov, the creator of this interactive world map, goes further by offering you the possibility of visualizing in a few clicks the most notable around the world. It’s hard to resist the urge to go to your place of birth or the city where you live to discover the most remarkable personalities there.

However, don’t expect to find your baker who’s been there for 30 years or your favorite social media influencer. Indeed, the creator of the map had to make choices using the data at his disposal, while taking care to avoid as much as possible the biases that can exist when doing this kind of work. All the people on the card are classified into four categories: culture, science and discovery, sport and games and “leadership”.

Did you know Freddie Mercury was born in Zanzibar and Barack Obama in Honolulu? Who is the most famous person from your home town?

I made a map of the most notable people around the world. Built with @Mapbox.

Each name that appears on the card is taken from a database used in a recent study published by the magazine Nature. This study aimed precisely to measure the notability of a person, according to several criteria:

The number of Wikipedia edits for each individual;

Page length, i.e. the total number of words found in all available biographies. It is zero for individuals with only one Wikidata entry and no biography in Wikipedia;

The average number of biography views for each individual between 2015 and 2018 across all available language editions, using an API. It is equal to zero in the absence of a Wikipedia biography;

The number of non-missing items retrieved from Wikipedia or Wikidata for date of birth, gender, and area of ​​influence. The intuition here is that the more notable the individual, the more his biographies will be documented;

The card itself, which you can find at this address, is very easy to use. The most notable personalities appear larger, so you can see them from further away. The more you zoom in on the map, the more personalities you will see appear. It is obviously possible to sort the results using the menu on the left. You can also display the number of cities rather than the number of personalities. You may be delighted to learn that you were born in the same city as Michel Jonasz or that you live in Montesquieu’s birthplace.

If you like fiddling around with the map yourself, here’s how to create your interactive map in Google Earth.