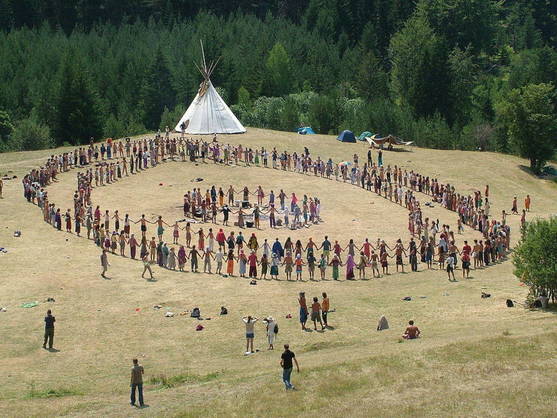 A total of 200 people who are recognized as the Arco Iris family are camping on a mountain located in La Rioja, Spain. They seek to connect with the hippie spirit of their ancestors to have a greater contact with the human body and nature.

According to the newspaper La Vanguardia, it is a large community of nudists from different sectors of the world, with airs of the hippie community of the seventies. There, they meet at least once a year in a place far from civilization and far from mobile satellites to be able to connect with each other in a very particular way: with the practice of free and unbridled sex.

The Rainbow Family does not escape the controversy since they camp naked in a natural environment and have sex in a kind of ritual of free love without limits and without pauses.

In fact, one of the biggest controversies is that in these families there are usually minors who closely observe said behavior and the authorities of the Municipality of Mansilla de la Sierra de La Rioja, consider evicting this and other types of behavior

The Civil Guard of La Rioja has processed almost a hundred administrative sanctions proposals for setting fire, occupying spaces that are not allowed and not complying with anticovid measures.

As sources of the investigation informed Efe on Wednesday, this group of people, who come from various European countries, practice nudism and live with several minors.

The participants have left their cars parked on a road located about 3 or 4 kilometers from the camping site, about 73 kilometers from Logroño and which is accessed by the mountain after crossing several slopes of 70%.

On this issue, the spokesperson for the Government of La Rioja, Sara Alba, has indicated, in an information conference, that there is evidence of this settlement and that “the measures to be adopted are studied, in co-governance with the affected municipalities, including the eviction ”.