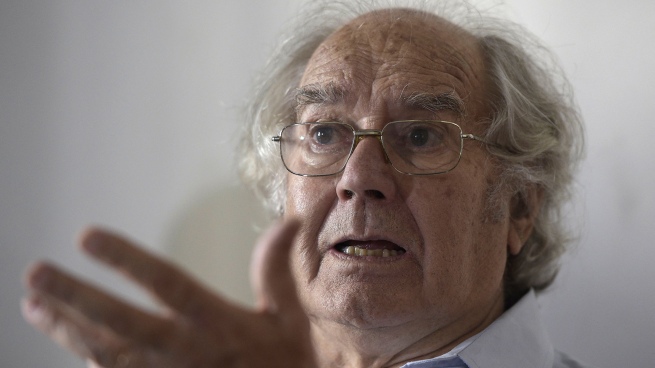 They repudiate the opening of the space that spreads ideas of denial, hate and racism

Representatives of human rights organizations and political leaders repudiated this Wednesday the opening of the “Centro Cultural” Kyle Rittenhouse (CCKR)from where it is promoted “The denial of the crimes committed by the last civic-military dictatorship and the gender policies and diversities in the city of La Plata are attacked.

It is a group that set up a local in the capital of Buenos Aires whose founders and members publicly promote hate speech, intolerance and denial.

The space embraces the figure of Kyle Rittenhousea young man from Illinois, United States, who cWith a semi-automatic rifle he murdered two people in the context of the protests against police brutality in 2020 plus, promotes denialist tendencies around genocide produced in the last civic-military dictatorship and they use neo-Nazi insignia in the premises.

Thus, from their social networks, in public appearances or through videos and texts, they refer to March 24 as “the Day of Struggle Against Subversion” or affirm through graffiti in the city that the victims of the genocide were not 30,000.

At the same time, in many of their communications they refer to the detained-disappeared persons as “terrorists”they refloat in their networks the theory of the “two demons”, “the dirty war” and “the subversive threat” and they also share materials claiming military repressors.

Also from space they damaged and painted murals from La Plata for Memory, Truth and Justice with expressions like “Death” on the faces of the Mothers of the Plaza de Mayo or wrote “Communist lefties” on the mural-tribute to the historic leader of the Revolutionary Communist Party (PCR) Otto Vargas.

At the same time, the CCKR presents itself in its networks as “an anti-communist and anti-gender ideology cultural-political space”; claims the fight against what they call a “femimarxist coalition”.

See also  Ronaldo Cisneros will return to the club; Atlanta United did not exercise the purchase option

Also, the entity refers to an alleged crisis of “Western and Christian values”, that points to the visibility of minorities and the progress in human rights policies as the culprits of the decline of civilization.

In this framework, different personalities consulted by Télam questioned the group and rejected the spread of their hate speech.

The president of the Provincial Commission for Memory (CPM) and Nobel Peace Prize winner, Adolfo Perez Esquivel analyzed before this agency that the statements of the members of the cultural center “are reprehensible from every point of view” and affirmed that “they have no historical memory.”

“It is pretending to ignore what the Argentine people have experienced. It is denial. I am a survivor of the horror and I could not be called a guerrilla. There was a guerrilla, which should be treated under the current laws and not what the dictatorship did, with the kidnapping and disappearance of people and babies. They do not have the values ​​in relation to what the people have experienced, “he considered.

He argued that “this does not affect the memory and experiences of a people who work to recover human rights and democracy” and added: “Fuck, but they are a minority.”

“A reflection of this is what is expressed by figures such as (the president of the PRO) Patricia Bullrich, who place black bags in the Casa Rosada, or (the national deputy) Javier Milei, who with their opinions demonstrate moral and intellectual degradation.”

“For this reason, it is important to strengthen and work on memory, not only to remember the past but to illuminate the present,” he concluded.

While, the Undersecretary of Human Rights of Buenos Aires, Matías Morenoasserted that “these are expressions that arise from the enabling speeches that reached their peak during the management of the Government of Cambiemos that since his assumption of power tried to dismantle the entire struggle of the Argentine people for Memory, Truth and Justice”.

In this sense, the official recalled that “they tried to run the holiday of March 24; they questioned the 30,000 disappeared; they wanted to reinstate the theory of the two demons and sought to benefit the condemned genocide with the famous 2×1”.

“Mauricio Macri (former president) made an acknowledgment in his office to a police officer who killed an unarmed person from behind. It is these enabling speeches emanating from power that allow this type of expression to emerge, which although I think they are marginal They spread hate. And it is not by chance that it happens, precisely in La Plata, where the alliance that Macri represented in the Nation and (María Eugenia) Vidal in the Province still governs until 2019, “he concluded.

Later, Silvina Arias, from Sons assured Télam that “in La Plata, the city where the Mothers began to walk, one of the cities with the highest number of missing persons in the country, We cannot allow denialism and hate speech and practices to flourish.”

“From Hijos La Plata we repudiate any negationist expression, and we regret that the media echo these positions that are far from sustaining democratic values,” he reflected.

In that tone, councilman of the Front of All (FdT) Guillermo “Nano” Caraauthor of a project repudiating the actions of the CCKR, told this agency that “the use of the name of a murderer for a cultural space is worrying, claiming insignia and historical processes that have left irreparable traces for our people, such as the last civic dictatorship -military”.

“The members of this space promote and exercise systematic practices of harassment, aggression and harassment of various political spaces in the city. This can be seen on their social networks: they boast of having vandalized Peronist premises,” he said.

The mayor reasoned that “these demonstrations are not isolated events, but are part of a climate of time in which denialism bids to win public spaces and adhesions.”

In this context, Cara pointed out that the photos of the Cultural Center show images “of the leader of Libertad Avanza, Javier Milei, who promotes messages of hate.”

The Mayor Ana Negrete -a Kirchnerist leader, teacher and representative of local feminism- presented this morning a request for reports to find out if the CCKR “presented the necessary documentation for its authorization in the municipality.”

In dialogue with Télam, the councilor expressed “concern about the proliferation of these denial groups, which have a great degree of violence and reject differences” and assessed that “they break the contracts of democracy.”