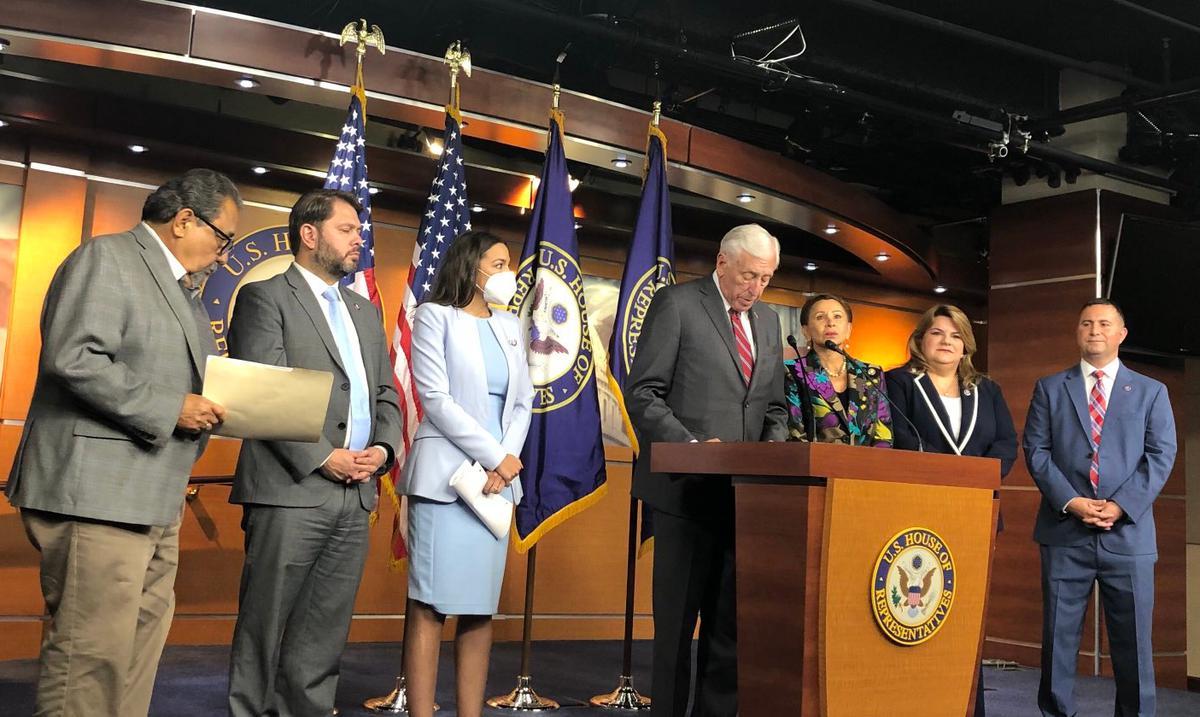 editor’s note: to stay informed on this and other issues, we invite you to sign up for our weekly newsletter “What’s happening in Washington.” In this way, you will receive in your email every Tuesday precise information on the affairs of Puerto Rico in the federal capital and the Puerto Rican diaspora.

Washington D. C.– The Democratic leadership and Puerto Rican federal legislators reached, on Wednesday night, a final agreement on the bill that will be presented at the United States House of Representatives to propose a plebiscite federal between statehood, free association and independence.

The measure to be filed in the next few hours further clarifies access to US citizenship under a first pact of free association between Puerto Rico and the United States.

The new language recognizes birthright US citizenship for children born to two US citizen parents during a first compact of free association. “Automatic birth access is proposed for children of two American parents,” one of the sources said.

Meanwhile, after contradictory information from sources close to the negotiations, there are different interpretations of whether US citizens will be able to be transmitted under the immigration laws of the United States in the case of an American parent under the first compact of free association.

In addition, reference is now made to the application of federal contributions under any status alternative.

From Day 1, my proposal on Puerto Rico’s status was simple–empower those on the island to determine their own future from a fair, democratic process.

The intention has been to recognize the impact of federal taxes under statehood and that even under the political sovereignty of Puerto Rico, US businesses and citizens remain subject to federal tax regulations, added a Democratic source.

The agreement does not add any language on the subject of language and rules out, in turn, the call for a public hearing on the measure.

After months of work and much discussion, we managed to finalize what we announced in May as a draft project to resolve the political status of Puerto Rico. pic.twitter.com/zxrIUhBiqg

On the issue of citizenship, the measure will establish – as was already the case with independence in the draft legislation – that the intention of Congress is to stop the transmission of US citizenship after the end of the first free association pact.

Hours earlier, the chairman of the Committee on Natural Resources, the Democrat Raul Grijalva (Arizona), had overtaken The new day that he was ready to call the voting session for next week – which he confirmed tonight – but that time was running out to reach an agreement.

“Puerto Rico’s territorial status has stifled the island’s development and potential for prosperity for too long. The people of Puerto Rico deserve a resolution to the political limbo they have been in for so many years.”Grijalva, Democratic Puerto Rican congressmen Nydia Velázquez and Darren Soto, and Resident Commissioner in Washington, Jenniffer González, who is caucusing with Republicans, indicated in a joint statement.

They affirmed that the bill will be filed this week and that it will be published in both English and Spanish.

Puerto Rican Democratic congresswoman Alexandria Ocasio Cortez had indicated that she would not support the legislation until it was officially published in Spanish. But, at the same time, Ocasio Cortez – contrary to Velázquez, Soto and González -, is not part of the Natural Resources Committee.

“This legislation establishes a path towards the decolonization of Puerto Rico by providing its residents with the opportunity to select between three non-territorial and fully autonomous political status options: Statehood, Independence and Sovereignty in Free Association with the United States. This historic proposal unites stakeholders from all sides of the status debate to present a democratic process to resolve the political status of Puerto Rico that Congress will sponsor and respect,” Grijalva, Velázquez, Soto and González added in their statement.

They also thanked the collaboration and expertise of the leader of the Democratic majority in the lower house, Steny Hoyer (Maryland), who this week had new conversations with the Puerto Rican federal legislators who have negotiated the potential bill.

The bill maintains the idea of ​​promoting a binding and self-executing federal plebiscite in which the island’s voters can choose on November 5, 2023 between free association, independence and statehood. If approved in the lower house, it would be the first time that this legislative body proposes a federal plebiscite that excludes the current territorial or colonial status.

None of the three measures aimed at calling a plebiscite on status alternatives that the lower house has approved – 1990, 1998 and 2010 – have advanced in the Senate.

This time, if the House of Representatives approves the project to be presented in the next few hours, history must repeat itself, since the matter is not on the agenda of the United States Senate, where the leadership has ruled out advancing a project in favor of statehood for Puerto Rico.

“My priority is time”Grijalva pointed out in the afternoon, when he announced that he was willing to receive criticism for not holding a public hearing on the bill, in order to advance the measure in his committee before the August recess, which begins on July 29 and will run until September 13.

As leader Hoyer has said, Grijalva stated then that without a consensus among the Puerto Rican legislators who participated in the negotiations – the Democrats Velázquez, Ocasio Cortez, Soto and Commissioner González – nothing was going to happen.

But Grijalva was already hoping to reach an agreement that would allow him to call a voting session next week. “Everyone has taken a serious stand on this issue and they want to move forward,” Grijalva said.

By regulation, Grijalva has to give the minority at least two days notice to call a voting session. But, he said they are normally given a five-day slot.

If he presents the bill on Thursday or Friday, Grijalva can call the voting session in his committee for Wednesday, July 20, which is the day they are normally held. He had indicated that July 27 is already on the calendar for his environmental justice legislation.

Congresswoman Velázquez indicated on Twitter that the measure incorporates claims made in Puerto Rico in early June, when, together with Grijalva, González and Ocasio Cortez, she participated in a public forum and met with the island’s political parties.

“It is a historic agreement,” said Commissioner González, who considers that it is a bipartisan project. Commissioner González was the only Republican in the negotiations and the minority leader in the Natural Resources Committee, Bruce Westerman (Arkansas), had already expressed his opposition to the draft legislation to El Nuevo Día.

“(The project) remains basically the same,” said Commissioner González, in a broadcast on Facebook. González said that he hopes that the voting session will be confirmed for next Wednesday, July 20, and stressed that the measure represents a message that the Commonwealth “is not a decolonizing option.”

Republican Congressman Tom McClintock (California), who opposes statehood for Puerto Rico, said that none of his colleagues on the Committee on Natural Resources has expressed support for the draft legislation announced almost two months ago.