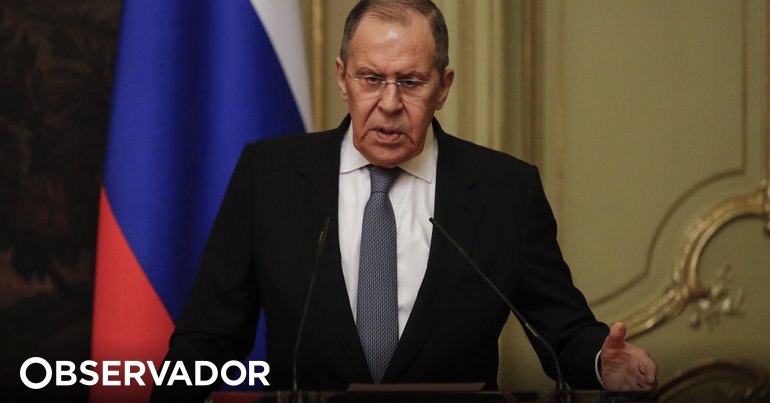 “They need to worry about their future” – Observer

The Russian Foreign Ministry assured this Friday that Russia is not at war with NATO. “We do not consider ourselves at war with NATO, because that would be a step that would increase the risks” of a nuclear threatwarned Sergei Lavrov.

In an interview with Al-Arabia, the head of Russian diplomacy stressed, however, that there is a “feeling” in the West that “believes that it is at war with Russia”. “NATO, the US, European leaders say bluntly that Putin must losethat Russia must be defeated,” he accused.

Contrary to some statements by Russian leaders who have been talking about the possibility of a world war, Sergei Lavrov signaled that it is not Russia that is “playing” with the words “nuclear war”, blaming Ukraine and Poland for that. To exemplify his point of view, the Russian minister recalled the January statements of Ukrainian President Volodymyr Zelensky, in which he considered Kiev to have abandoned its nuclear status a mistake. The Russian MNE also mentioned the fact that the Polish Prime Minister, Mateusz Morawiecki, agreed to have US nuclear weapons on Polish territory.

“Western countries must contain the leaders of Ukraine and Polandwho do not seem to see any danger in the use of these terms”, shot the Russian Foreign Minister.

Also pointing to the eternal enemy, Sergei Lavrov said that the United States forces other countries to adhere to anti-Russian rhetoric, something that reminds him of “colonial relations”. “It is absolutely unacceptable”, he characterized, accusing the US regime of resembling a dictatorship. “These people are saying it’s a battle between ‘democrats’ and ‘autocrats’. What kind of democracy are you talking about?” he asked.

The Russian minister raised the tone of the criticism, stressing that this stance is a “Shame on Western Civilization”. Regarding NATO, Sergei Lavrov believes that it is no longer a defensive alliance. “The North Atlantic Treaty Organization was a defensive alliance when there was the Berlin Wall, when there was a geopolitical wall between NATO and the Warsaw Pact”he explained, reinforcing that, when the Soviet Union ceased to exist, the alliance began to “extend” its “line of defense” to the east.

In the same interview, when asked whether Moldova should be concerned about the invasion of Ukraine, Sergei Lavrov did not give a full answer, preferring to leave a warning: “They need to worry about their own future“. And he justified, claiming that the country was “being arrested for NATO”: “I don’t think that helps Moldova’s security”.

On May 9 (the day on which Nazi Germany surrendered to Soviet forces), which has been touted as the day on which Vladimir Putin wants to announce a great victory, Sergei Lavrov does not commit to any feat, stating that the “special military operation” in Ukraine will only be “completed once the objectives” of Russia “are implemented and achieved”. In the future, despite the war, the minister is confident that Russia and Ukraine will have friendly relations.