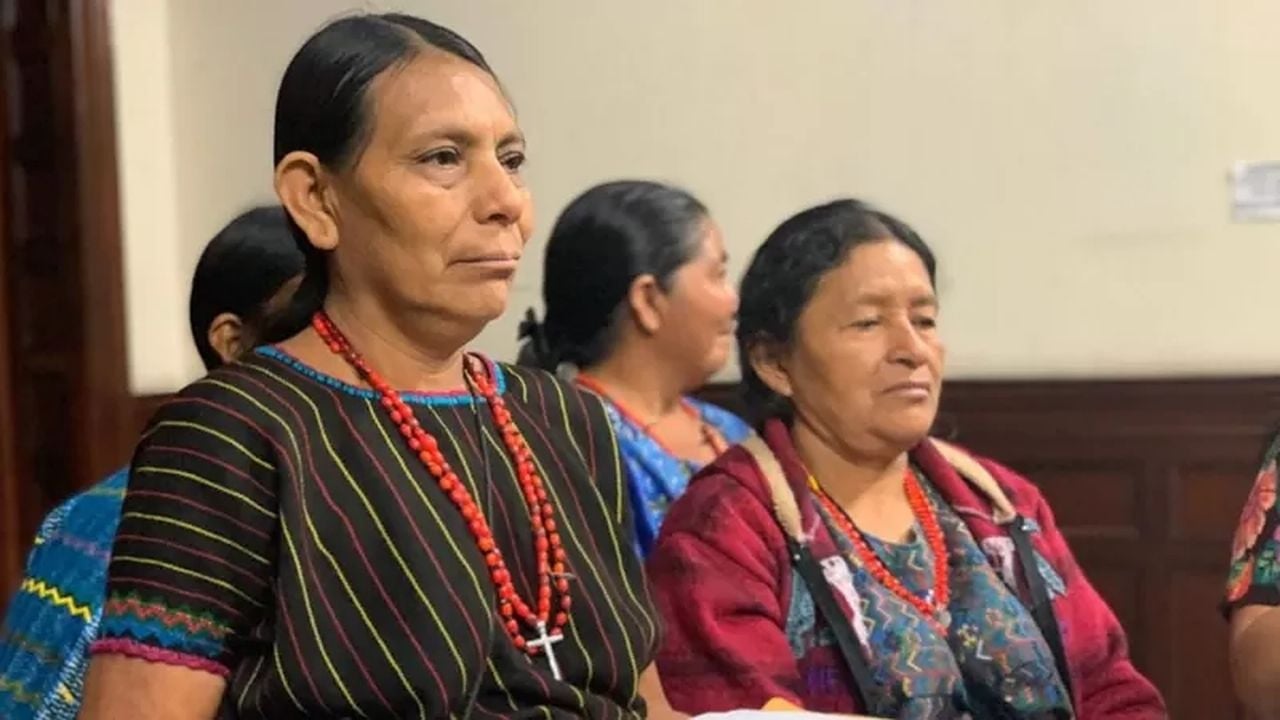 It was an ordinary Sunday for Paulina Ixtapá.

He was 19 years old and was walking with his mother towards the municipal seat of Rabinal, a town located in the center of Guatemala, about 100 km from the capital.

“Some people approached my mother and said ‘we want to talk with your daughter,'” Paulina tells BBC Mundo, recalling that fateful afternoon in 1983 in which her life changed.

The men who had approached them were members of the Civil Self-Defense Patrols (PAC): paramilitary groups created by the then military government of Guatemala with the argument of wanting to involve the civilian population in the protection of the country’s municipalities against violence. apparent threat from leftist guerrilla groups.

Today, almost 40 years after that episode, five former members of the Rabinal PAC are facing a historic judicial process for alleged systematic rapes of 36 Achí women from that Mayan municipality. Paulina is one of the alleged victims.

“You are going to meet your husband later”

That Sunday afternoon, the patrolmen, who were not wearing a uniform, led Paulina to the military detachment in the region. She was not the only woman there.

“Upon arriving at the detachment they asked me, ‘Where is your husband?’ I told them that I didn’t have a husband and they replied: ‘You are going to meet your husband later.’

According to the woman, the patrolmen questioned her about an alleged relationship she had “with a certain Juan,” but she explained that he had left her some time ago.

The answer did not seem to be what the patrollers wanted to hear.

Paulina says that one of the men grabbed her by the neck and told her: “Now you are going to tell us who are the people who are coming with you at night.”

Sexual violence as a weapon of war

According to Lucía Xiloj, a lawyer for 29 of the victims of the case of the Achí women from Rabinal, the cases of sexual violence occurred between 1981 and 1985, within the framework of the internal armed conflict in Guatemala.

“These women were illegally detained and taken to the military detachment where they were victims of public and continuous rape,” says Xiloj.

The PACs were an integral part of the efforts of the military government of the time to end the leftist guerrillas, and sexual violence was used as a weapon of war to establish who of the population belonged to which side.

This has led the victims’ lawyers to hold the Guatemalan state accountable for “failing to fulfill its commitment to guarantee that women live a life free of sexual violence.”

However, it is not yet clear whether the state will be included in the case as a responsible party.

Paulina says that from that fateful night in 1983, and for the next 24, she was forced to remain in the military detachment. And he adds that during each of those nights, he was the victim of heartbreaking acts of sexual violence.

“The 25 days in the detachment, they raped me every night. And when I left, I came out sick and always, always persecuted […] They told me that if they saw me in the community, they would kill me at once. ”

Given the situation, Paulina left for the capital to escape the community. And although he returned some time later, he says that his recovery was a slow and tortuous process.

“For me it was very hard. It was very hard because not only did they rape. They also killed several children. They stole our animals. They burned our house. And when I stayed, I was left with only a change of clothes.”

That is why the trial that began on January 5 means so much to the Achí women of Rabinal.

Through a statement of September 2021, the women said: “We have been waiting 40 years for justice to be done for the sexual violence and the horrors we suffered during the internal armed conflict in Rabinal, Baja Verapaz.”

As if 40 years of waiting weren’t enough, the hearing scheduled to begin on January 4 was delayed for an additional 24 hours.

Faced with the new delay, some of the Achí women held a Mayan ceremony in front of the Supreme Court of Justice.

However, the wait ended on Wednesday, January 5, with statements from the prosecution and defense, and with the defendants following the process through teleconference.

Now, the victims hope that their story will be known and justice will be done. At least that’s what Paulina hopes.

“I’m looking for justice, and we are not going to get back everything they stole. But what they did hurts me.”