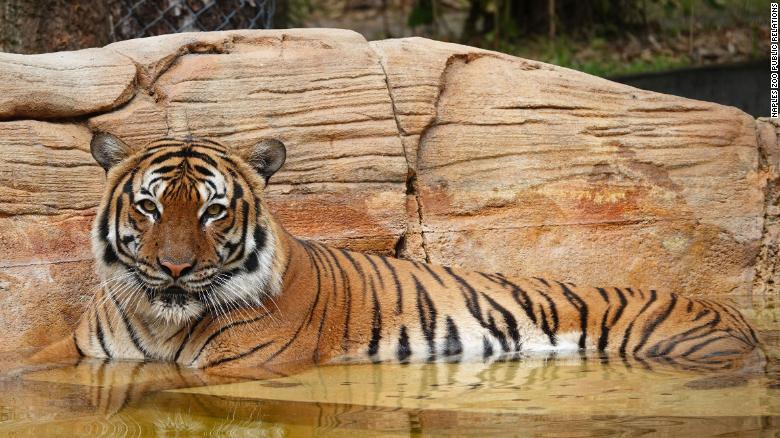 (CNN) — A tiger was shot and killed by a sheriff’s deputy Wednesday after attacking a man at a zoo in Naples, Florida, authorities said.

The man, who is in his 20s, was seriously injured when he entered an unauthorized area of ​​the tiger enclosure at the Naples Zoo in Caribbean Gardens and began petting or feeding the tiger, the Collier County Sheriff’s Office said in a Facebook post.

The attack occurred after the zoo had closed for the day. The man was part of a cleaning service hired by the zoo to clean the restrooms and gift shop, not the animal enclosure, the sheriff’s office said.

The tiger grabbed the man’s arm and pulled him into the compound after he crossed “an initial fence barrier and put his arm through the fence of the tiger compound,” the sheriff’s office statement said.

The first officer to respond to the scene kicked the compound and tried to get the tiger to release the man’s arm, but “was forced to shoot the tiger,” the sheriff’s office said.

The man, who was not identified by the authorities, was transferred to a hospital in the area.

The tiger, named Eko, died, a zoo official told CNN. Eko was 8 years old and arrived at the zoo in December 2019, the official said. The zoo did not provide further details about the incident.

Eko was a Malayan tiger, typically found on the Malay Peninsula and in the extreme south of Thailand, according to the zoo’s website.

Malayan tigers are critically endangered and face threats including poaching and habitat loss, according to the zoo site.

The zoo remains closed Thursday due to ongoing investigation, but will reopen Friday, Courtney Jolly, the zoo’s marketing director, said during a news conference shared with CNN by affiliate WBBH on Thursday.

“We are giving our staff some time to process what happened, but we are also giving them some time to begin the grieving process and the healing process,” Jolly said. “It is a very sad day at the zoo. And we sincerely appreciate the support of the community. “

Jolly said the Naples Zoo had never had an incident like this or with this specific tiger, or that “no one broke a fence and put themselves in this situation.”

The zoo has a “shooting team” that is trained for “daily crisis activity” and the protocol is for that team to be at the zoo when it is open to the public, Jolly said. The team includes an incident commander, someone in charge of the animals, a lead shooter, and a lead dart.

“We fully support the Collier County Sheriff’s Office. They have been amazing for us, not just yesterday, but in the long run. We have been partners with them for a long time, ”Jolly said. “If a person is in imminent danger, they have to take that action and we supported the CCSO and unfortunately the officer had to do his job.”

A grief counselor has been hired on staff and will stay as long as necessary, he added.

The zoo decided to start a fund in Eko’s name to honor him and his memory, but details of the fund are still being worked out, Jolly said.

Aya Elamroussi and Jennifer Henderson contributed to this report.