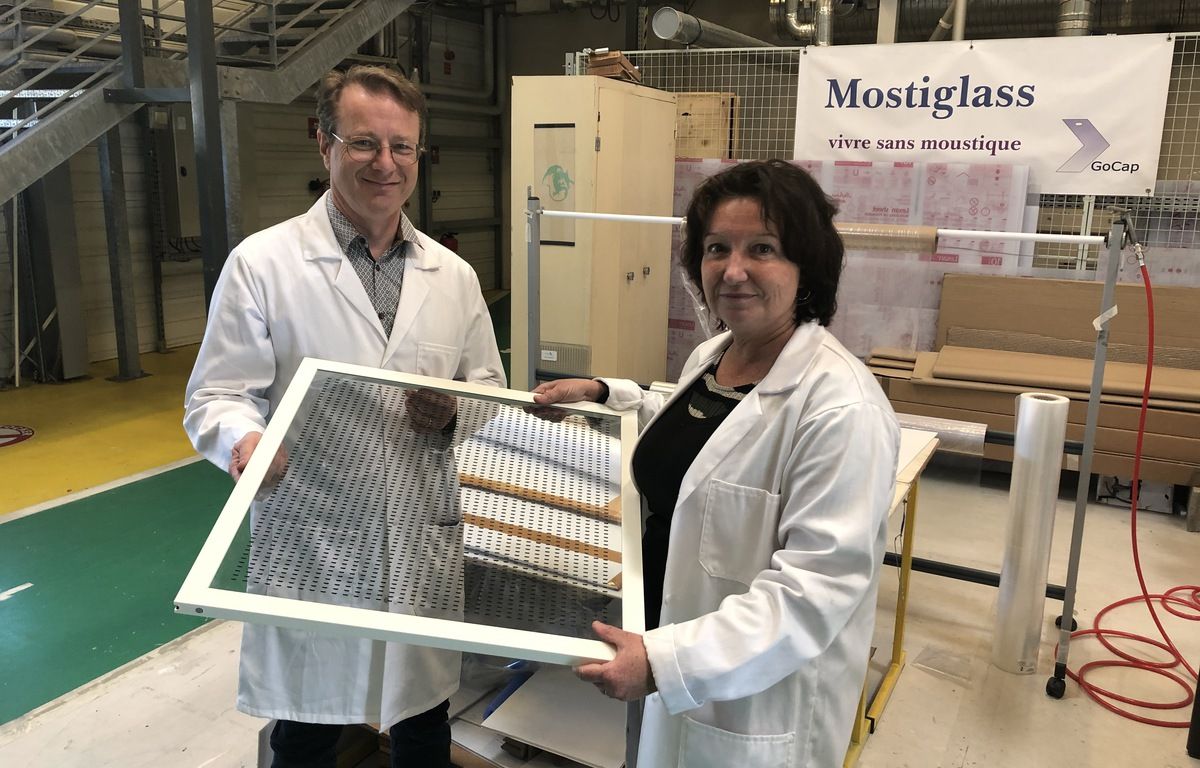 Do you dream of cool summer nights away from mosquito bites? A couple from Girondins have developed a new kind of mosquito net after a stay in Mauritius, where tiger mosquitoes are among the smallest in the world. Combining their skills, Nathalie Capitaine, former professor of physics, and her husband François Capitaine, former industrial specialist in polymers, developed Mostiglass patented in April 2018 and validated by the WHO.

Their invention protects against biting insects but also brings cooling to the rooms where it is installed. Several communities such as the cities of Paris, Montpellier and Agde are already customers. And, throughout France, individuals are showing their interest in this solution, which can be installed on windows, French windows and bay windows, in a flexible or rigid form, in made-to-measure formats.

They started from the observation that the mosquito nets already on the market can deform over time, and under the effect of the sun, losing their effectiveness. Some also darken the rooms of the dwellings. “François knows a lot about polymers and he chose to use polycarbonate,” says Nathalie Capitaine. The perforation, made with lasers, was studied with the help of the WHO-accredited laboratory. [Organisation mondiale de la santé] to study the shape of the hole and to validate the most efficient one. »

The former teacher worked on the shape of the perforations which play on a venturi effect, a physical principle which makes it possible to “accelerate” the air which enters, this decompression is accompanied mechanically by a drop in temperature. Result: above 20°C outside temperature, the incoming air is cooled by passing through the Mostiglass device. “If it is 29°C outside, it will be 25°C inside”, explained Nathalie Capitaine. And this can go up to a difference of ten degrees if the outside temperatures are very high, according to laboratory analyses.

To preserve the luminosity of the housings, a colored treatment is applied around each perforation to allow light to penetrate without there being “light flashes”. Flexible Mostiglass models in a roller are offered at 35 euros per m2 and at 80 euros per m2 for rigid products.

Customers all over France

“We are really meeting a need,” says Nathalie Capitaine. And often people react by wondering why we didn’t think of it sooner. “And in this month of April which should soon sign the return of mosquitoes, individuals are increasingly seeking the young company, whose activity has been slowed down like many others during the health crisis. Recently, they equipped an individual who lives in Sarthe. Until now, he could not enjoy his veranda without being attacked by clouds of mosquitoes because of the proximity of a pond. Most of their customers live around the Mediterranean, in the Camargue, but also in Alsace, in the Paris region and in Gironde (Basin of Arcachon, Médoc).

Installed in the Cheminnov nursery of the ENSCPB Bordeaux, the couple is preparing to move to Dax, in the Landes, for next year. “There are a lot of inventors who are looking to sell their idea, but our ambition is to produce here in France,” underlines François Capitaine. Our objective is to be able to perfect the invention, in particular in contact with customers and to focus little by little on production, by delegating customer contact and installation. »

Right now they don’t have any employees and are getting by because they’ve come up with a very automated process. But they will have to recruit in the future to face their development which they envisage international. The cities of Bordeaux and Mérignac recently expressed their interest in Mostiglass. The device could in particular be tested in nurseries which welcome a fragile and virus-prone public for which air conditioning is not recommended. “Mostiglass allows a gentle renewal of the air”, emphasizes Nathalie Capitaine.

See also  4 reasons you should know

Both a remedy for mosquitoes, whose populations are increasingly infesting our regions, and for the heat, while heat waves are expected to be more and more frequent, Mostiglass could have a bright future ahead of it.