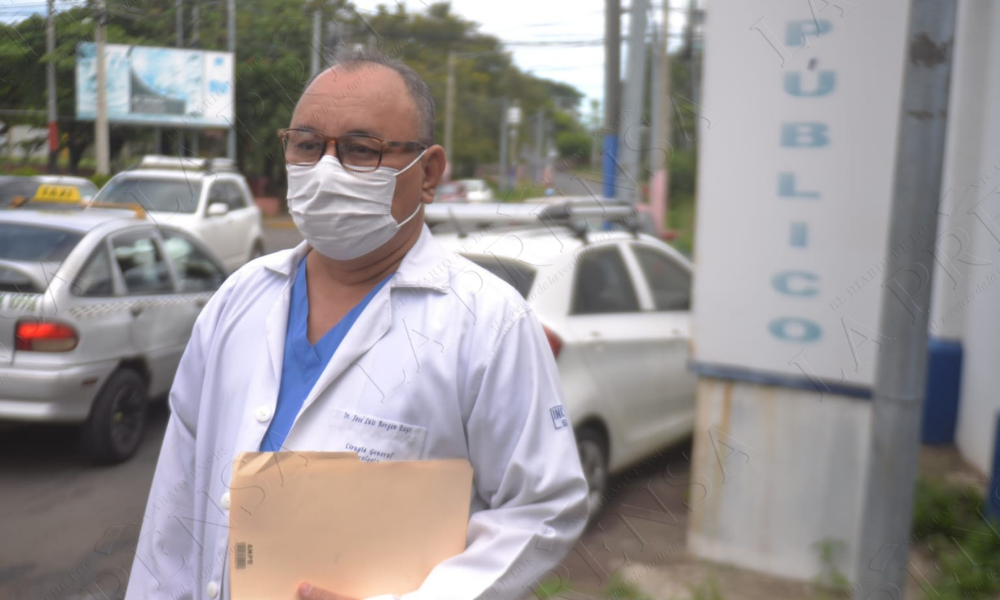 Dr. José Luis Borgen Rayo, a member of the Unidad Gremial por Nicaragua, an organization that is also part of the Nicaraguan Medical Unit (UMN), appeared this Tuesday before the Public Ministry of Nicaragua, responding to the summons he received for an interview related to a medical consultation that he gave to the presidential candidate María Asunción Moreno on July 10.

Upon leaving the Office of the Prosecutor, Borgen stated that during the hour and a half of the interview, the prosecutors questioned him about the 15-day rest order that he extended to Asunción Moreno. The doctor added that the citizen deserved “absolute rest and medical treatment” for a severe infection, that was what he explained to the Public Ministry officials.

Despite the fact that the Prosecutor’s Office was insistent on the issue of the presidential candidate, Dr. Borgen downplayed the citizen’s political aspirations and stressed that his job is to directly serve patients, regardless of their ideology. “They did not clarify if it is the candidate for the presidency, in one of the questions they told me ‘the doctor’, so I assume it was her, otherwise, they would not have summoned me.”

He supports his action in the medical duty to attend to all people who need it and states that the consultations with independent doctors have increased, because «the same has happened with people who have lost confidence in the Ministry of Health, in terms of management of the pandemic. So we provide counseling care, over the phone, “he added.

Borgen explained that as part of the interview the prosecutors forced him to present as “proof” the medical diagnosis that he made to Dr. María Asunción Moreno, reveal the condition and, incidentally, explain it, thus violating, says the specialist, the confidentiality that exists between doctor and patient.

Borgen believes that this can generate mistrust among citizens seeking to be served. “They forced me to bring the registry and I gave it to them.”

“If the Public Ministry is summoning us to talk about the illnesses of patients, then it is likely that patients do not want to go to independent doctors (…) then this will decrease (the care) and people can generate false information to the doctors. They asked me for the diagnosis of Dr. Asunción and they kept a photocopy, “he continued.

You may be interested: Murillo makes serious threats against journalists: “Everything is paid for in life, chattering magpies”

This meticulous interview with the doctor takes place after the presidential candidate María Asunción Moreno did not appear for the summons that the Prosecutor’s Office made for July 12.

The entity controlled by the dictatorship also asked Dr. Borgen for a close telephone contact with Moreno, but he explained that this person was in the United States. They will have to investigate that contact there. The other thing is that, I do not know the address of her house, I attended her at home, as I have done with other patients, “he clarified.

For Borgen, this summons against him could translate into the new stop that the Ortega dictatorship is raising, now against independent doctors who since the beginning of the pandemic – in March 2020 – have monitored the behavior of Covid-19 and have alerted to the advance of the virus in the country.

On July 7, the designated vice president Rosario Murillo launched serious threats against the medical union, accusing them of “false doctors” who report “false forecasts” about the pandemic, this, after doctors warned about the increase in hospitalizations due to the Covid-19.

“As doctors have been the critical contact in terms of the way the pandemic has been handled, the lack of transparency in the information, probably that is the background of the interview,” he said.

Before entering his interview with the Prosecutor’s Office, Dr. José Luis Borgen exposed the harassment of which he is being a victim due to people related to the government.

«Yesterday my house was being watched by some paramilitaries, I understand they identified themselves as policemen dressed in civilian clothes, undercover, there was also a couple of motorists dressed in civilian clothes who spent until 12:10 at night watching my house, now They also travel in taxis, make a connection with them, bring them food and take everything to monitor the people who are of interest to them, ”he describes.

Also read: This is how the regime contradicts itself in its speech on handling the pandemic

«Today, when I was coming here, the same thing happened, since I left my house they followed me on motorcycles, but I don’t really know what the purpose is, when one approaches them, they take off and leave, because one would like to ask them which one It is the problem with one or who they are, but since they do not want to identify themselves, I presume that they are plainclothes policemen, I hope they are not paramilitaries, because here in Nicaragua things have already happened as a hit man and I hope that does not happen, “said Borgen .

He insists that doctors defend the right to health and human rights of all Nicaraguans and points out that “the problem is that now there is a line. Unfortunately, the vice president in her speeches made reference to the work of doctors, has branded us with false epithets, when we only do our duty ».

At the end of the interview, the Prosecutor’s Office did not notify him of a new summons, he only requested an email and the disposition in case it merits a new future collaboration, however the doctor did not rule out being summoned again, due to the information he provides to the media in relation to the management of the pandemic.

With this measure, Borgen becomes the first independent doctor cited by the Nicaraguan Prosecutor’s Office in a political context where the dictatorship has paraded different sectors of society, including civil organizations, journalists, businessmen, heads of the media, politicians, activists and even bankers.