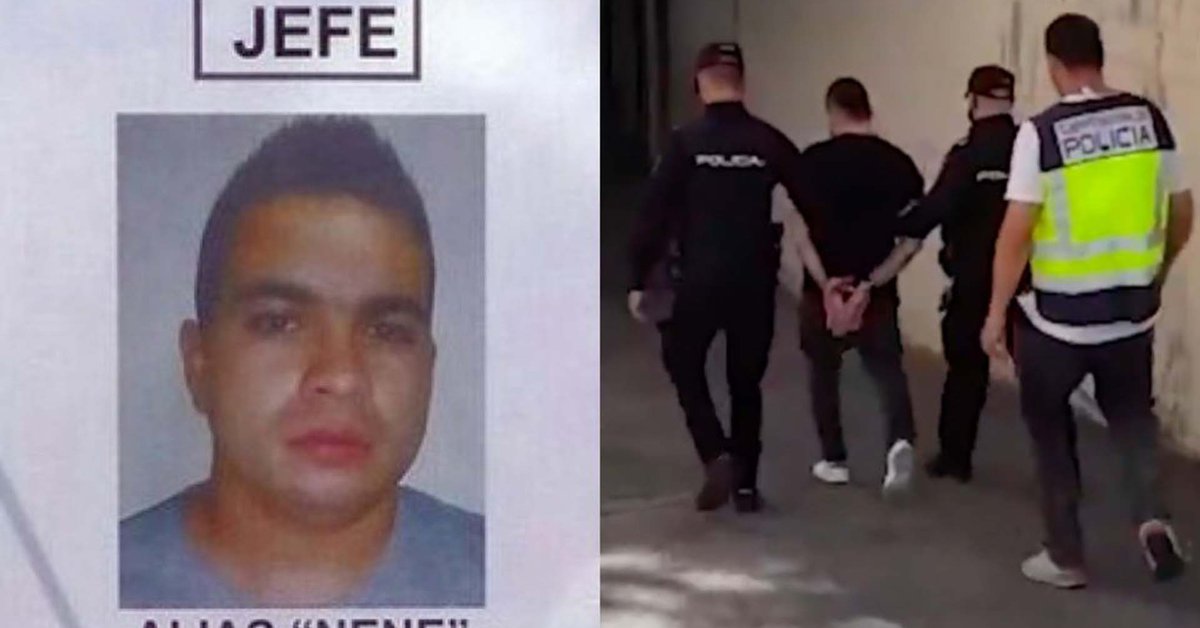 This is Jonatan Andrés Zuluaga Celemín, who has resided in Spain since 2015 and had already been detained by the authorities of the European country on two other occasions. Photos: National Police, ABC

In Madrid, the capital of Spain, a ruthless Colombian criminal who, since 2015, has lived in the European country to expand the criminal network built in his country of origin was hit hard. This is Jonatan Andrés Zuluaga Celemín, who would be no more than 37 years old, accused of being the alleged perpetrator of more than 100 homicides on Colombian soil and the bearer of a blue Interpol circular. Among his victims, stands out the murder of his mother-in-law, Sindy Tatiana Gómez Valencia, in an act of revenge as a result of a theft from the criminal organization that she led.

Zuluaga Celemín, better known as ‘El Nene’ or ‘Snoopy’, is called ‘satanás’ by several important Spanish media due to the evidence of his bloody criminal record in Colombia. According to ABC, The man who belonged to a criminal organization called ‘La Cordillera’, was on Spanish soil in 2012 and was captured in Arganda del Rey, 22 kilometers from Madrid, at the age of 27.

On that occasion, Colombia requested the criminal for an alleged link to ‘Los Rastrojos’ and, despite using false documents, his fingerprints gave him away. However, in his native country he was released three years later and, in 2015, he flew to Spain in order to expand his illicit business there, as in France and Belgium.

According to ABC, the man would have married a Spanish woman to obtain papers of residence in the country to which he aspired to go and stay to achieve his crimes. In 2016 he was saved from capture when his partner, alias ‘Carbonero’, was arrested and managed to flee. However, his second capture in Spain would have been on March 11, 2019 in Leganés, again, within the Community of Madrid, not far from the place of his first encounter with Spanish justice.

With the help of Interpol, they captured a dangerous Colombian hitman in Spain

According to the SER radio station, with three international arrest warrants and an Interpol circular, he was charged with the crimes of conspiracy, homicide, manufacturing, trafficking, carrying or possessing firearms, accessories, parts or ammunition. The transnational operation, called ‘Sin Fronteras’, arrested 31 people – 9 in Colombia and 22 in Spain – linked to the Zuluaga Celemín organization. At the time, the man had a false Venezuelan identity.

However, according to the Spanish newspaper Nius, the criminal was released three months later due to failures in the extradition process. After it was learned that Zuluaga was no longer in custody, the Colombian authorities again requested his capture but, at the time, the criminal was on the run.

The capture and what follows ‘El Nene’

In a joint effort between the National Police of Spain, the counterpart institution in Colombia and Interpol, the fugitive was captured on May 25. And his family, without knowing it, was the one who gave away the location of Zuluaga and led to his third arrest on Spanish soil.

Some members of the ‘El Nene’ family frequently traveled to Spain by plane. According to EFE, Colombia warned about the activity and the authorities of the European country verified the movements and began surveillance work. Even, according to Nius, His property assets of him and all the people around him were traced. Even the Spanish Police found his sentimental partner and, in the process, a possible son on Spanish soil.

In a vehicle, in the middle of Madrid, he ran into the man and his arrest occurred. At the moment, according to the aforementioned media, It is known that the man entered the Valdemoro penitentiary last Thursday, in the south of the Community of Madrid, where they await an extradition order for his shipment to Colombia. According to an ABC report corresponding to his first capture, The man has two convictions in Colombia: one for seven years and the other for 25 years in prison.

‘La Cordillera’, the dangerous gang that he led in Colombia and for which he was working in its expansion, has alleged operations in Risaralda, Quindío, Valle del Cauca, Antioquia and Bogotá, according to the local media La Opinion. They not only committed homicides, but also pulled the strings of a drug trafficking network. In 2019, according to ABC, they became the second two most wanted men in Colombia.

Despite the fact that he left the country in search of increasing the impact of his crime, the man did not lose validity and carried out crimes spread throughout Madrid, Zaragoza, Andalusia and Belares, in Spanish territory, as well as in other European countries. In addition to the old continent, man did not stop there and consolidated in South America and in countries such as Panama, the United States, Mexico and Cape Verde, located in insular Africa.

All this, he achieved in about 15 years of criminal history with which, under international alerts, he managed to evade justice on several occasions. Zuluaga Celemín, who is making headlines today for his record of blood spilled, is awaited by the Colombian authority who hopes not to let him escape for the second time in a row.

Between January and March 2021, 34 social leaders were assassinated, according to the Ombudsman’s Office
Minister of Justice assured that Gustavo Petro agitates the masses to generate chaos in Colombia