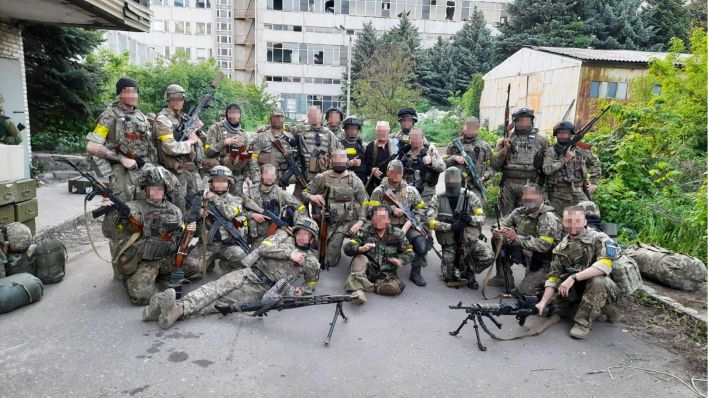 “There was no way to dissuade him”

Brandenburger dies in the war in Ukraine
–


“There was no way to dissuade him”

Björn C. is said to have left Oranienburg about three months ago to fight alongside the Ukrainians against the Russians. He was killed in battles in the east of the country. Ismahan Alboga met the family of the volunteer fighter.

The meeting with Björn Benjamin C’s grandmother takes place in Potsdam. She actually lives in Berlin. Two relatives from Potsdam accompany her. All three wish to remain anonymous. It is mainly the grandmother who speaks. She mourns the loss of her grandson, who died at the age of 39, to whom she feels very close. “We cry a lot,” she says.

At the beginning of March he left Oranienburg to fight in the Ukraine. C. is said to have had no military experience whatsoever, he only received proper training in the Ukraine. “He even had to learn Russian vocabulary for fighting,” says the grandmother.

“I got a new girlfriend with more oomph,” he wrote to his grandmother on May 21, 2022. By that he meant his gun. The grandmother was in regular contact with her grandson. On May 28, she received the last message from him: “Everything is fine, I’ll get back to you when it’s possible again”. Since then she has heard nothing from him.

39-year-old died in an artillery attack

It is now clear that C. is dead. When asked by rbb, the Berlin police said about the circumstances of his death: “He died on May 31, 2022 in an artillery attack near Kharkiv.” The “Bild” newspaper first reported on his death.

But who was Björn Benjamin C.? Why did he want to volunteer to fight in Ukraine? He was born in Berlin-Wedding, reports C’s grandmother. He spent part of his childhood with his father in the Harz Mountains because his parents separated early.

Later he also lived with his grandparents in Berlin, as she continues. First he went to high school, then switched to a secondary school and graduated from there. He then did an apprenticeship at a Berlin security company, according to his grandmother. Most recently he had a small forwarding agency in Oranienburg, transporting pianos.

He had a girlfriend who lives in Berlin. Björn Benjamin C. is said to have lived in Oranienburg.

Grandma wanted to dissuade him

The grandmother takes her mobile phone out of her handbag, she looks for pictures of her grandson, finds a group photo from the Ukraine. You can see him in uniform with 21 other volunteer fighters. In the photo he is smiling. He looks “proud” to grandma. “Finally he was happy,” she says. He is said to have had a great sense of justice. His grandmother believes that he wanted to “fight for peace and defend Ukraine”. He was proud to do the right thing.

But Björn C. was not a blank slate. When asked by rbb, the Berlin police reported that “the deceased has already been reported to the criminal police for property damage and fraud.” The grandmother says it was a youthful sin, he didn’t have to go to prison. About 20 years ago he paid the penalty with community service.

Grandma wanted her grandson to stay in Germany. She tried everything to change his mind, but there was “no chance to dissuade him”. Nothing concrete is known about connections to Ukraine. His relatives describe Björn Benjamin C. as humorous, helpful and loyal.

No German statistics count the volunteers

In the first days after the Russian attack, Ukrainian President Volodymyr Zelenskyi announced the founding of an “International Legion” and invited foreigners with combat experience to participate. It is not known how many German citizens followed this call. Authorities do not keep any statistics about volunteers like Björn Benjamin C.

The military expert Ralph D. Thiele, chairman of the Berlin Political-Military Society, criticizes this. The former colonel worked in the military in the planning staff of the Ministry of Defense and at the Bundeswehr Command and Staff Academy.

Anyone who voluntarily goes to Ukraine from here should be documented, says Thiele. He is currently assuming almost 1,000 voluntary fighters from Germany. He refers to the dispute with the terrorist organization Islamic State (IS). At that time, 3,000 fighters from Germany were recruited by the IS. He estimates the mobilization potential of Ukraine much higher. In the long term, more people from Germany could go to Ukraine as volunteers. Then there could be more than 3,000 combatants, he predicts.

“He’s the first we know about”

In general, according to Thiele, it is not possible to draw a homogeneous picture of who voluntarily joins the Ukrainian side and what their motivation is. He says he suspects that Björn Benjamin C. may have made contacts in Ukraine via the Internet. Thiele considers the combat training that C. then enjoyed in Ukraine to be dubious. Essentially, it must have been a crash course, he says. “I assume that the training could have only lasted a few weeks.” That’s way too short.

The Russian army is a brutal force, and anyone who goes to Ukraine as a volunteer with no military experience faces death, Thiele says. People like Björn C. and other volunteers would end up just being “cannon fodder”. He also believes that Björn C. is probably not the first dead fighter from Germany. “He’s the first we know of,” says the military expert.

No “information relevant to state security” about Björn C.

Right-wing extremists are also making their way to Ukraine. When asked by rbb, the Federal Office for the Protection of the Constitution announced that it had information on the travel intentions of 46 people with extremist connections or connections to politically motivated crime (as of June 13th). So far, 25 people are known to have left Germany for Ukraine who have a link to extremism or politically motivated crime. Seven of these people are probably still in Ukraine.

The Berlin police are not aware of the fact that Björn C. could have had a connection to extremists, as they say. “There are no state security-related findings about him.” The Federal Criminal Police Office does not give rbb any information on personal data for “data protection reasons.” The Brandenburg Ministry of the Interior states: “According to the residents’ registration office, Mr. C.’s residential address is not registered in the state of Brandenburg. No further personal information can be given from here”.

A comrade is quoted in the “Bild am Sonntag”: “We were stationed in the east of Kharkiv.” The man, who is also said to be a European volunteer, described the situation as follows: “On May 31, we moved into our observation post there. I had the first shift, took a break, and then it was Björn’s turn.”

Repatriation of the body unclear

On June 4, 2022, the International Defense Legion of Ukraine (ILDU) announced on its website that four volunteers of the International Legion of Territorial Defense in Ukraine had been killed. However, the volunteer organization did not provide any information on when, where and under what circumstances they died. The names of the four men are mentioned there, including the name of Björn Benjamin C..

At the meeting in Potsdam, the family is still waiting for official notification, and it is also unclear whether the remains will be returned from Ukraine. “We have to comfort ourselves. I’m happy that he was happy,” says the grandmother. And makes her way home with her family.

Note: Military expert Ralph D. Thiele revised his estimates downward after the text was published. We have changed the numbers in the text under the subheading “No German statistics count the volunteers” accordingly.