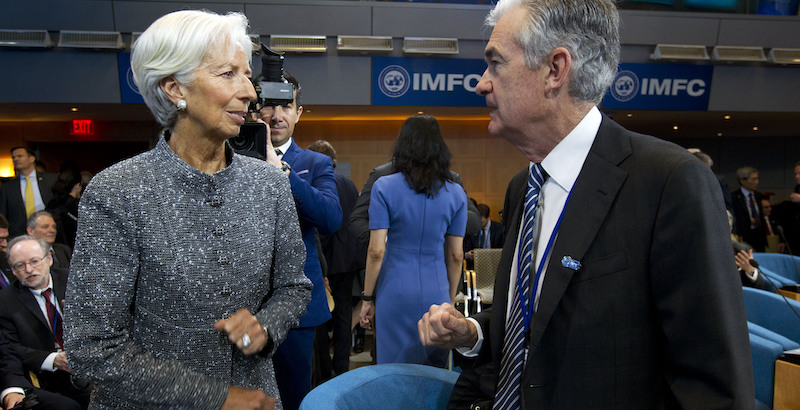 In recent months, and around the world, prices have risen significantly, due first to the pandemic and then to the war in Ukraine. This can be seen from the increase in inflation, the parameter that measures the changes in the prices of a set of products and services representative of the average cost of living. Both the United States and the European Union are experiencing inflation rates that have not been seen for many years and that are weakening the purchasing power of families. The respective central banks, the Federal Reserve and the European Central Bank, are intervening, but in a very different way because the reasons for the price increase are not the same in America and Europe.

In July, inflation in the area of ​​countries adopting the euro (the so-called “Eurozone”) recorded + 8.9% on an annual basis, the highest rate since the euro has existed (and a new record after that of June of + 8.6%). In practice it means that if a good last July cost 100 euros, today it costs 108.9. This value is an average: there are countries that have exceeded 20%, such as Estonia, Latvia and Lithuania, others have recorded a figure above 10%, such as Greece, Spain and Belgium, and others are remained below this threshold, such as Italy (+ 7.9%, slightly slowing down from +8 the previous month), Germany (+ 8.5%) and France (+ 6.8%).

Even in the United States, inflation has grown a lot: it reached + 9.1% in June, never higher in 40 years.

What is inflation and what are the causes
As mentioned, inflation represents a generalized increase in the price level. It is measured periodically by the statistical institutes, which monitor the prices of the goods and services most purchased by the average consumer and which are representative of the cost of living. There is talk of the so-called “reference basket”, which is periodically updated by the statistical institutes to take into account cultural changes in consumption.

In Italy, ISTAT updates it every year: for example, in 2022 goods entered that before the pandemic we knew little or did not know at all, such as do-it-yourself tampons and take-away poke (a dish based on rice and raw fish typical of Hawaii, which means “cut into pieces” and which has become very consumed in the lunch breaks of those who work in large cities).

When it is at moderate levels, inflation is a healthy component of traditional market dynamics.

Rising prices are usually associated with an economy that is doing well: without complicating things too much, it can be said that a growing economy is one in which companies produce at a rate that employs many workers. There is therefore little unemployment and wages are constantly rising precisely because there are not many unemployed workers willing to work for a low wage.

At this point, inflation is almost always observed above the average; and it is a problem, because during inflation not all prices and wages rise in the same way. For example, in many countries retirees receive a check that is not tied to rising prices and lose purchasing power when inflation is high. Likewise, most salaries do not automatically and instantly adjust as the cost of living rises. Furthermore, excessive changes in prices create a climate of greater general uncertainty, making it more difficult for companies to make decisions about the future as well.

To avoid or limit this type of distortion, central banks adopt policies trying to normalize the economy and slow down the increase in inflation.

The instrument traditionally used is the increase in reference interest rates. Interest rates are simply the price of money: to borrow 100 euros from a bank, it will ask for the payment of an interest rate, therefore a price. The reference interest rates are set by the central banks. If these increase, borrowing money will become less convenient: with higher interest rates, fewer mortgages will be made to buy houses, therefore less will be built and there will be less renovations, there will be less need for workers and some of them. they will lose their jobs. Those who lose their jobs will start consuming less, and the economy will start to slow down to a new balance point.

See also  End station "Daisy": This is where your iPhone's last hour comes

This is a normal dynamics of demand inflation, which originates from increasing consumption, but prices can also increase for other reasons.

If for various reasons it costs more to produce goods and services, it is called inflation on the supply side. For example, the pandemic had already made it more expensive for companies to find the raw materials necessary for production (think of the case of microchips and paper).

The war in Ukraine has then worsened the situation, above all by enormously increasing the cost of energy and gas. Indeed, Russia, which is the second largest natural gas producer in the world, has steadily reduced its gas exports in response to sanctions imposed by the West. The reduction mainly affected Europe, which imported 40% of its gas from Russia; on the contrary, the United States is more independent in terms of energy and has not suffered too much from it.

The inflation we observe in recent months is a mixture: there is certainly a component linked to a running economy, after the enormous slowdown imposed by the restrictions due to the coronavirus pandemic, but there is also inflation on the side supply, mainly due to the increase in energy prices.

See also  Winora Tria N8f test: an electric bike made for the city and commuting

It means that the rise in the cost of energy and food explains almost half of European inflation, while only one-fifth of that of the US. This suggests that in the euro area we are facing mostly supply-side inflation, while in the United States it is now a classic demand-side inflation deeply rooted in the economy.

What the central banks are doing
This difference is fundamental to understanding how central banks decide to act in the face of inflation.

Supply inflation cannot be fought by raising interest rates, because there is no need to slow the economy; it is done by trying to “sterilize” the component that is causing prices to rise the most. In fact, there is a risk that a premature and rapid rise in rates will cause an excessively abrupt or profound economic slowdown, leading to recession. It is a risk that becomes more concrete in the event that inflation is temporary, or in any case not so systemic.

This is why the US Federal Reserve (Fed) and the European Central Bank (ECB) have decided to implement different policies.

The Fed has been raising its interest rates for months and is doing so much more quickly and aggressively than expected; the Gross Domestic Product (GDP) of the United States has already been falling for two quarters, by the way. The ECB only announced the first hike on 21 July, after it had in the meantime reabsorbed the policy of massive purchases of government bonds initiated during the pandemic. The ECB is betting on the fact that European inflation, precisely because it is more driven by energy prices, is less structural than American inflation, and that therefore the risk of raising rates too soon is much more concrete.

The difference between the two approaches also serves to understand why in international negotiations Italy has pushed hard to start a discussion on a ceiling on the price of gas and oil. If governments managed to calm the price of energy, they would effectively sterilize a substantial part of inflation.