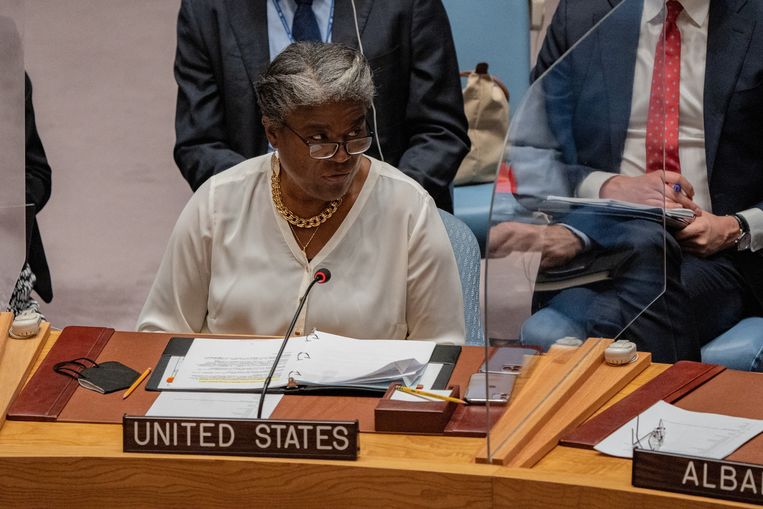 Linda Thomas-Greenfield told the UN Security Council that the United States is seeing growing signs that Russia is attempting to annex Ukraine’s eastern regions of Donetsk and Luhansk and the southern regions of Kherson and Zaporizhzhya. “They do this, among other things, by installing illegal local officials and holding mock referendums to join Russia.”

“Russian Foreign Minister Sergei Lavrov has even stated that this is Russia’s war target,” said Thomas-Greenfield. Lavrov told an Arab summit in Cairo on Sunday that Moscow’s overarching goal in Ukraine is to liberate the population from the “unacceptable regime”. In doing so, he suggested that Moscow’s war goals extend beyond the industrial Donbas region of eastern Ukraine. “We will certainly help the Ukrainian people get rid of the regime, which is absolutely inhumane and anti-historic,” Lavrov said.

Thomas-Greenfield listed evidence of mounting atrocities, including the bombing of schools and hospitals, the killing of aid workers and journalists, the attacking of civilians trying to flee, and the brutal execution of people going about their daily business as in Butja, where, according to local authorities, hundreds of people were killed during the occupation by Russian troops.

The US ambassador also said there is evidence that Russian troops interrogated, forcibly detained and deported an estimated hundreds of thousands of Ukrainian civilians, including children. Nearly 2 million Ukrainian refugees have been sent to Russia, according to both Ukrainian and Russian officials. Ukraine depicts these trips as forced transfers to enemy territory, which is considered a war crime. Russia calls it humanitarian evacuations of war victims who already speak Russian and are grateful for a new home.

A recent Associated Press investigation based on dozens of interviews found that while the situation is more nuanced than the Ukrainians suggest, many refugees are indeed being forced to embark on a surreal journey to Russia. Along the way, they are exposed to human rights violations and stripped of all their official documents. Those who leave pass through a series of so-called filtration points, where treatment ranges from interrogation and search to being set aside and never seen again.

“The United States has information showing that officials of the presidential government of Russia are overseeing and coordinating the filtration operations,” Thomas-Greenfield told the Council. Polyansky countered that despite Ukraine’s attempts to intimidate their citizens, “the people choose the country they trust,” namely Russia. He also warned that the heavy weapons the West is pouring out on Ukraine “will spill over to Europe” because of “the thriving corruption under Ukraine’s political and military leadership.”

Polyansky said Western weapons only “prolong the agony and increase the suffering of the Ukrainian people.” Addressing Western ambassadors, he said, “The goals of our special military operation will be achieved no matter how much oil you throw on the fire in the form of weapons.”