A total of 31 localities distributed in 19 municipalities of the mountain area stopped receiving intern doctors since August 1, after being considered as risk areas by the State Health Secretariat, based on reports from the same students of the Faculty of Medicine and Biomedical Sciences of the UACh who demonstrated on July 19 in front of the Government Palace to demand that they not be sent to remote communities.

The cancellation of these places will not affect the care for the inhabitants of the localities, because there are graduated doctors who work in these places, informed the director of the UACh Faculty of Medicine, Luis Carlos Hinojos, who stressed that they were the same interns who refused to go to risk areas after the murder of Dr. Massiel Mexía, which occurred on July 11. The doctor worked as an anesthesiologist at the Rural Hospital IMSS-Wellness 18, in San Juanito, Bocoyna.

Dr. Luis Carlos Hinojos explained that for a year the Faculty of Medicine has requested that the places offered to intern doctors not be in remote areas, in the so-called “solitary units”, points where university students who had to remain alone were previously sent. in these units, for a year.

The offer of vacancies 2022-2023 eliminated these remote places and the vacancies that were offered in municipalities of the sierra were considered to be in safe areas because they were clinics, hospitals or rural units in which the interns were with more people or in less remote areas. and solitary, among these was the IMSS-Wellness Hospital, in San Juanito, in the municipality of Bocoyna.

See also  I was hungry Lucy...

The director of the Faculty of Medicine reported that there were 11 interns who had been contemplated to start their social service on August 1, however, they refused to go to this place.

He added that based on the places that are offered by health institutions, risk points were defined, and although they are not the only ones that can be considered dangerous due to crime, they are the ones that correspond to the places offered.

In this way, the towns defined by the SSE as risk points are:

The director of Medicine of the UACh, Luis Carlos Hinojos, indicated that it is important to clarify that neither the Ministry of Health nor the Faculty he directs have asked that social service be eliminated as such, but that it be carried out in adequate and safe conditions.

He added that what has been contemplated is that the time of social service be six months, whenever the law allows it. “Among rules, laws and regulations, there are 22 and of these all speak of a period of six months to two years to carry out social service, but this cannot be decided at the state level,” he pointed out. 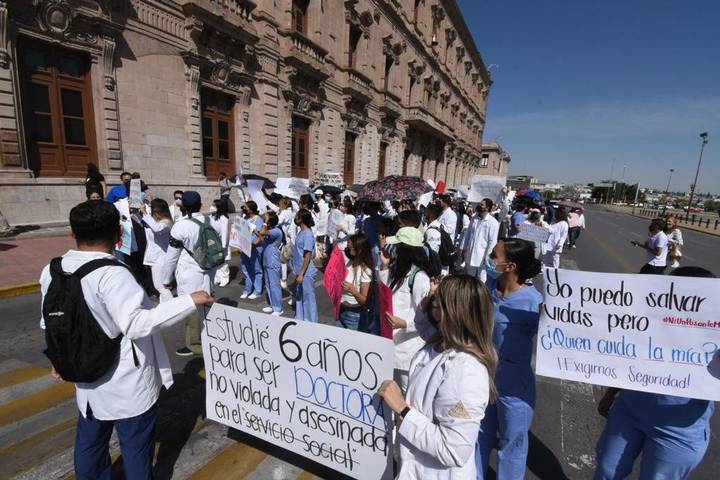 Similarly, he said that this possibility is being seen at the federal level, by the Mexican Association of Schools of Medicine, the Association of Physicians in Training and the Congress of the Union. He reiterated that it has not been indicated that social service be ended, but rather that it be carried out in places where interns are safe.

He also reported that last Monday, intern doctors who had been assigned to go to the IMSS-Wellness Hospital in San Juanito began their social service in other areas.

He indicated that the interns were relocated by the SSE to the Health Unit of Creel and Álvaro Obregón, where there are no reports of violence.

The interviewee explained that 11 of the practitioners who began their social service this August, and one more who had already been in a job for six months, were relocated due to insecurity in San Juanito, Bocoyna.

He affirmed that at the moment the measure that was agreed with the SSE was to eliminate places for social service in areas that register an increase in violence, however this measure is definitively sought since the internship in some parts of the state is a risk for the recently graduated from Medicine.

In total, eight interns attached to the IMSS were not relocated by the dependency, so they decided not to take the positions that were in areas that they considered to be at risk, however they were relocated to other sites through the connection area and the SSE.

Between the municipalities of Madera to Urique there are at least 54 rural health units, both state and federal, in which basic consultation services are provided and function as dispensaries, according to the directory of Health Centers in the State and Structure Health of the federal government. In addition, in the same area there is a hospital and three clinics.

The municipality of Bocoyna has 5 health units and in the town of San Juanito there is the IMSS-Wellness Hospital, which provides services to the inhabitants of neighboring municipalities.

➡️ Receive the most relevant news from Chihuahua, Juárez and Parral directly to your email. Subscribe to our Newsletter!

In the same municipality of Bocoyna, in Creel, there is a State Early Care Center, which serves as an outpatient clinic, in which basic cures are performed. Similarly, Creel has the ISSSTE Primary Care Clinic.

In Chihuahua there are localities of mountain municipalities considered high risk, according to the Public Directory of Health Services. Regarding rural areas, there are 102 SSE medical units, while IMSS Welfare has three rural hospitals, 144 rural medical units and three mobile units.