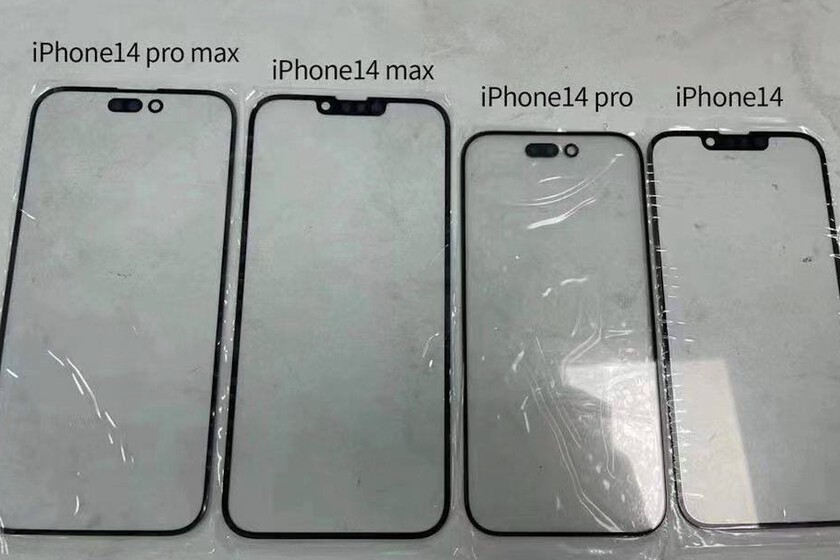 The photograph that you can see in the header speaks for itself. Has anyone leaked what they possibly are the final panels of the iPhone 14, insisting on details that had been discussed in previous leaks. The range will consist of four models, two medium screen and two screen. Goodbye mini, hello non-Pro-Max.

iPhone 14 front panels have leaked on Weibo – here are the changes to note:
1) thinner bezels on the Pro models, as reported by other sources
2) aspect ratio is also slightly different on the Pros (19.5:9 to 20:9); this corroborates with 9to5Mac’s report regarding taller displays pic.twitter.com/UtqNcBB9aP

Non-pro models feature a notch similar to that of the current iPhone 13, perhaps a little smaller, although the difference would be small. The Pro models would release the “double hole”, one circular and the other in the form of a pill; and thinner screen borders can be seen. That may mean that the Pro models could carry a different screen technology or a newer generation of the current panel that allows reduction in those edges.

Another thing that is commented on the networks is that you guess a change to the screen aspect ratio on Pro models: becomes 20:9 to 19.5:9. It’s a very slight change that makes the screen a bit taller, which almost no one will appreciate unless it’s said well and compare it by putting the iPhone 12 or 13 side by side with a 14 Pro.

We should see this new range of iPhone 14 presented in september, in an event that would kick off a very dense fall release schedule according to rumours. At that same event we should see the Apple Watch Series 8, perhaps with the design modifications that were leaked last year. I repeat the maybe.