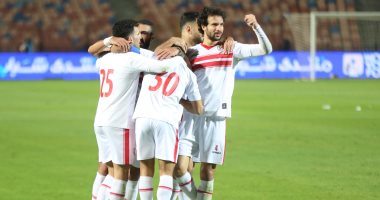 The Zamalek apparatus divides the players into 4 groups in training

The technical staff of the first football team in Zamalek club, led by French Patrice Carteron, divided the players into 4 groups at the beginning of the training session today, Wednesday, to perform special tactical and technical exercises.

Medhat Abdel Hadi, the team’s general coach, Amir Azmy, the assistant coach, and Fernando, the Portuguese load coach, supervised the implementation of the exercises with each different group.

Meanwhile, the duo, Tariq Hamed and Omar Al-Saeed, players of the first football team in Zamalek Club, rested from group training today, Wednesday, in light of their bruise..

The duo underwent special rehabilitation training under the supervision of the team’s medical staff led by Dr. Muhammad Osama.

Zamalek is preparing to participate in the League Cup, and the draw for the tournament resulted in the presence of the white team at the head of the third group.“.

Zamalek is scheduled to play its League Cup matches against Enppi on January 14th.

On the other hand, Zamalek club officials are awaiting the return of Mohamed Abu Jabal, the goalkeeper of the team and the national team, from Cameroon after the end of his participation with the national team in the African Nations Championship, to negotiate with him about renewing his contract, which expires at the end of the current season, and he has the right to sign for any club next January.

Zamalek officials have not negotiated with Abu Jabal about renewing his contract so far due to the goalkeeper’s preoccupation with the team’s camps, and then the national team, and negotiations will be opened with him after returning from Cameroon.