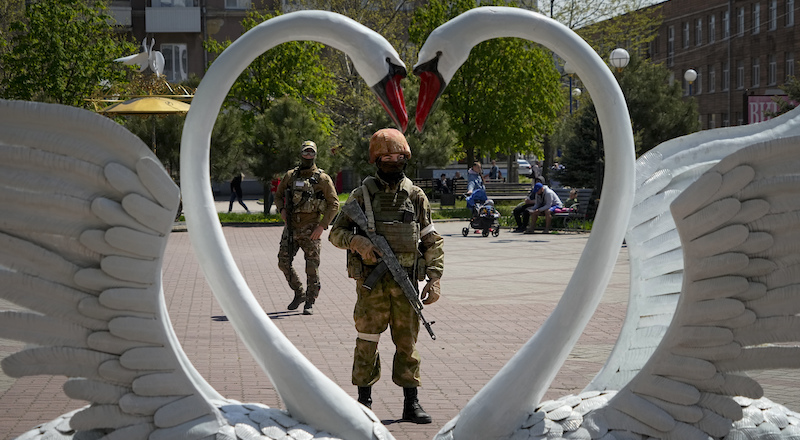 The violent russification of a Ukrainian city

In various cities of southern and eastern Ukraine, which have been occupied for months by the Russian army, attempts at forced integration of the population continue thanks to a combination of techniques of violence, coercion and corruption. The Russian military is trying to turn these cities – the best known of which is Kherson in the south of the country – into Russian cities and to make the population loyal or at least obedient.

The success of these objectives will greatly depend on how long the occupation lasts, and whether or not Russia will be able to make forced “Russification” a long-term project.

On Wall Street Journal, reporter Thomas Grove told how things are going in Berdyansk, a city in southern Ukraine that had 115,000 inhabitants before the war and was almost immediately occupied by Russian forces. As in other Russian cities, the occupying forces introduced the ruble as the currency (the ruble is the Russian currency), replaced all Ukrainian public offices and eliminated all symbols of the Ukrainian state, replacing them with Russian flags and symbols.

Using the accounts of people who have fled from Berdyansk and various other sources and reconstructions, Grove has however added various valuable information on how the process of forced Russification and suppression of dissent is going.

In Berdyansk, as in other Ukrainian cities conquered by the Russians, in the first days of the occupation hundreds of people took to the streets with Ukrainian flags to protest. One of the organizers of the protest in the city, Grove writes, was Tatyana Tipakova, the owner of a small grocery store. The protests went on for days, but then some Russian soldiers showed up at Tipakova’s shop and arrested her.

They had taken her to a nearby prison, where she had been tortured: they tried to asphyxiate her with a gas mask, beat her on the head and hands, used electric shocks by attaching a cord to her ear. Eventually, they asked her to record a video in which she renounced her pro-Ukrainian positions, and they released her.

The woman told Grove that other protest organizers had been arrested and tortured, and that this is how the demonstrations and resistance were stopped.

This method of violent coercion was also used in other settings in Berdyansk. For example, the Russian forces have had all Ukrainian school books replaced with books that teach Russian history, and they want students to start using those books from the next school year. When the principal of a local school refused to cooperate, the Russians arrested her 10-year-old son.

Replacing civil servants with accomplices was another important move by Russian forces. The mayor of the city was replaced with a complacent person towards the occupation, while a more strenuous job was required for the police. In the first month of occupation, many plainclothes Ukrainian policemen continued to support the resistance of the population, but gradually they were identified and forced to resign. Grove spoke to a city policeman who claims that when he refused to cooperate with the Russian army, he was arrested and tortured, and only released following a prisoner swap.

Then there is corruption: large numbers of people have fled Berdyansk, and Russian forces have expropriated their assets – including real estate and businesses – and handed them over to complicit and pro-occupation people, like complacent policemen.

The occupying forces are trying to make everyday life as “normal” as possible. As the economy has collapsed and food supplies are in short supply, Russian forces have launched various holidays that are rarely celebrated in Russia, such as the birthday of the Russian poet Pushkin. Recently, the first marriages since the beginning of the war were also celebrated, with a civil ceremony according to Russian law and in a hall full of Russian flags. Of the six couples who got married, two had already done so in the past, and it is likely that they repeated the ceremony for propaganda reasons and to give legitimacy to the pro-Russian administration.