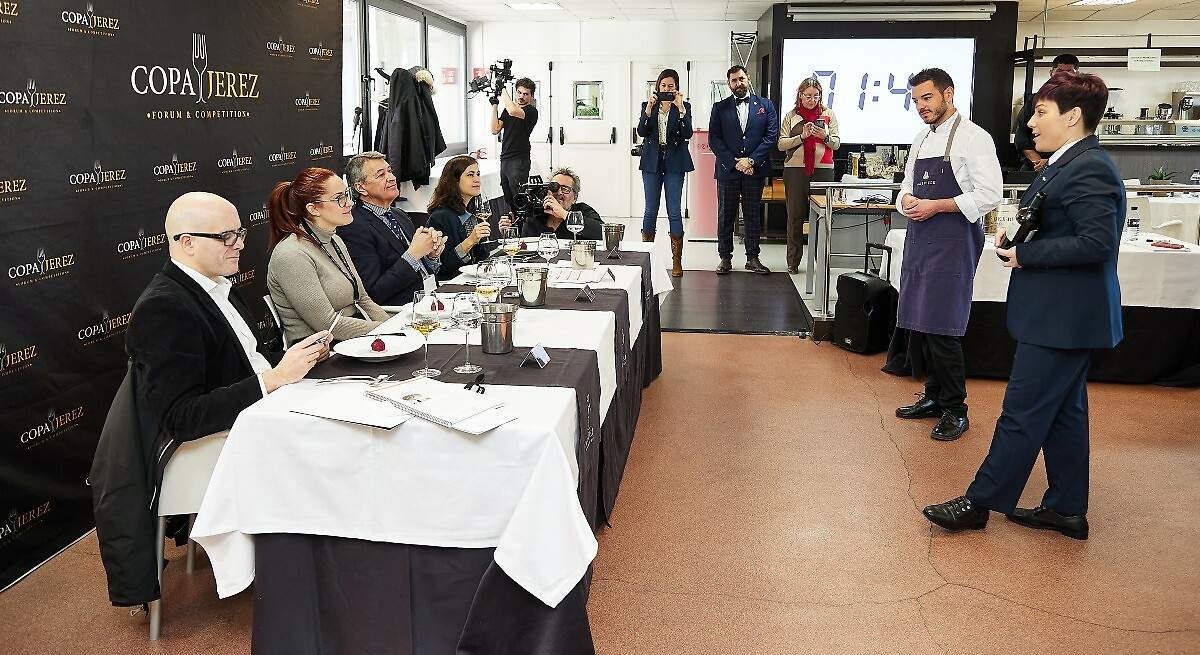 Ambivium Restaurant has emerged as the national winner of the X Copa Jerez after preparing and defending its harmonies proposal before the jury of experts from the Sherry Wine Regulatory Council. The Hospitality School of the Madrid Chamber of Commerce has been the setting where they have tasted and valued a three-course menu harmonized with Jerez wines.

The jury announced its verdict in the framework of the Madrid Fusión gastronomic summit before professionals, journalists and gastronomic critics who have been able to taste, in a paired tasting, the proposals presented by the finalist teams.

The team is proud to be able to represent Spain in the international final of this contest that reflects the Ambivium philosophy, where harmonies are created from the wine for the menu each season, and where Jerez wines are very present in a menu with more than 4,000 references. “At Ambivium, wine is the protagonist. We have always opted for harmonies and for having in our winery references from the most representative areas of the world, such as Marco de Jerez. For us, the vineyard, and speaking of Jerez also the soleras They are not an inheritance from our parents, but a loan from our children”affirmed Pedro Ruiz Aragoneses.

Time is the guiding thread of the menu that will represent Spain in the X Copa Jerez, as sommelier Laura Rodríguez highlighted: “Jerez is time, patience and listening. And that link that we feel from Alma Carraovejas with Jerez is what we wanted to capture through the harmonies proposed for the contest”.

‘Escabeche: quail and beetroot’ is the starter that they have harmonized with La Panesa by Emilio Hidalgo. The main dish on the menu, ‘Adobo: trout, ham and halophytes’, is one of Ambivium’s icons, which they have presented together with William Humberts’ Amontillado 2011. For dessert, ‘Fermentation: cocoa, hazelnuts and tonka beans’, which harmonizes with La Bota de Cream 79 “Bota No” by Equipo Navazos.

The three dishes have been prepared based on various conservation techniques, the starting point for Cellarium, the Ambivium tasting menu. Chef Cristóbal Muñoz pointed out that “along with the different methods that we have inherited from our ancestors in these proposals We have taken the territory and the product into account”.

Sommelier Laura Rodríguez and chef Cristóbal Muñoz will face off against the best candidates from Germany, Belgium, Denmark, the United States, the Netherlands and the United Kingdom in an authentic live cooking show that will be held the next 3 and 4 October. The eight finalist proposals will be exhibited at the largest and most prestigious international forum on Sherry Wine, Copa Jerez Forum & Competition, which brings together a complete program of presentations given by professionals such as Josep Roca, Quique Dacosta, François Chartier, Andoni Luis Aduriz or Ángel León, among many others, to more than 200 congressmen from different countries.