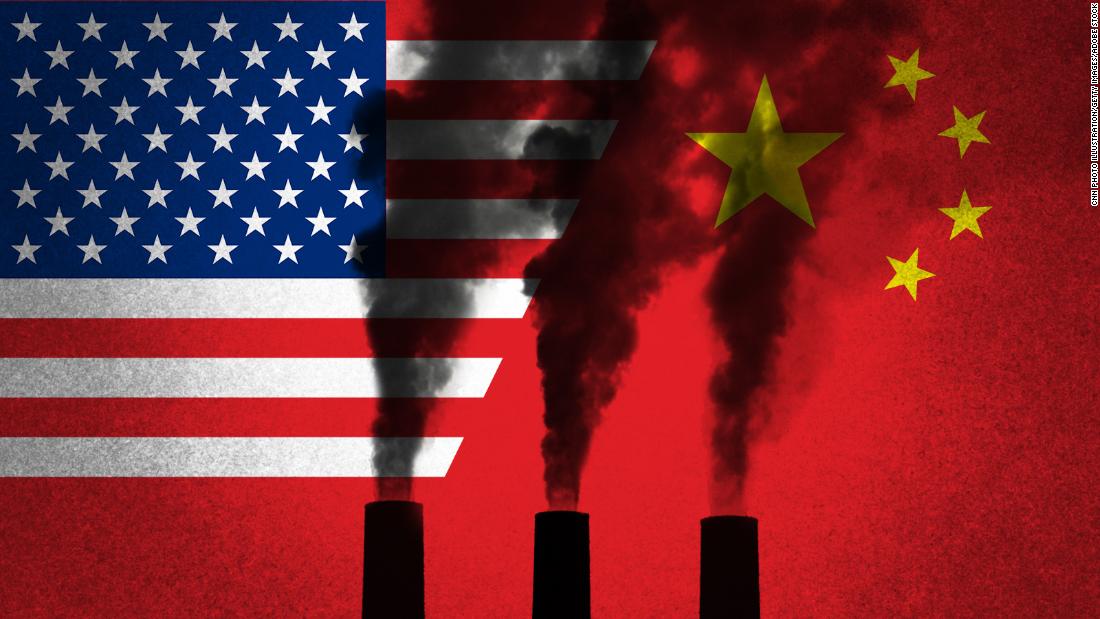 The US and China are the largest emitters of greenhouse gases. Who is worse?

(CNN) — China and the United States are the two largest emitters of greenhouse gases in the world, so any attempt to tackle the climate crisis will have to involve large cuts in emissions from these two nations.

China’s emissions are more than double those of the US, but historically, the US has emitted more than any other country in the world.

There are many factors to consider when judging a country’s climate credentials, and when leaders meet in Glasgow, Scotland, for Sunday’s COP26, the plans of the United States and China will be in the limelight.

Here’s how the two compare.

In 2006, China surpassed the United States as the world’s largest emitter of carbon dioxide (CO2), the most abundant greenhouse gas in the atmosphere.

In 2019, the last year before the pandemic, China’s greenhouse gas emissions were nearly 2.5 times that of the United States, and more than all the world’s developed countries combined, according to an analysis by Rhodium Group.

In terms of CO2 equivalent, which is a way of measuring all greenhouse gases as if they were CO2, China emitted 14.1 billion metric tons in 2019. That’s more than a quarter of the world’s total emissions.

When scientists measure greenhouse gas emissions, they look at the total emissions that a country pumps into the air in its own territory each year. Those emissions come from anything that runs on fossil fuels, including driving gasoline-powered cars, flying, heating and lighting buildings with power generated from coal, natural gas, or oil, as well as from the power industry. Other sources are also included, such as emissions from deforestation.

No country in the world has put more greenhouse gases into the atmosphere than the United States. And by far.

While China is by far the largest emitter today, it hasn’t always been. And that’s important because emissions released even hundreds of years ago have contributed to global warming today. The world has already warmed 1.2 degrees Celsius since the start of the Industrial Revolution, and scientists say we must keep it at 1.5 degrees to avoid worsening the impacts of the climate crisis.

China’s CO2 emissions began to accelerate in the 2000s as the country developed rapidly. Advanced countries like the US, UK and many in Europe have been industrializing and emitting climate-altering gases in the process for about 200 years. Many of the comforts of living in a developed country have come at the cost of the climate.

Since 1850, China has emitted 284 billion tonnes of CO2, according to a new analysis by Carbon Brief, a UK-based organization that covers climate, energy and policy.

The United States, on the other hand, industrialized decades earlier and has released 509 billion tons of CO2, double that.

China is a huge country of 1.4 billion people, so it makes sense that it emits more than smaller nations in general. But when you look at emissions per capita, the average Chinese person emits considerably less than the average American.

In 2019, China’s per capita emissions reached 10.1 tons. By comparison, the United States reached 17.6 tons, according to Rhodium Group.

That is not to say that China should not drastically cut emissions. China’s per capita carbon footprint is rapidly catching up to that of the richest nations – in the past 20 years, it has nearly tripled.

See also  Young Siberians are fleeing to Mongolia in droves

Natural gas produces fewer emissions than coal, but it is still bad for the climate, and there is growing concern that the United States and other parts of the world are investing too much in gas rather than renewables.

China is the world’s largest user and producer of coal, consuming more than half of the world’s supply. This is partly because China produces so many products and materials for the world, which is why it is sometimes called “the world’s factory.”

China produces more than half of the world’s steel and cement, which is made from burning coking coal. Alternative fuels are being developed for these heavy industries, such as green hydrogen, but are not yet available on a large scale. The emissions of those two industries in China are higher than the total CO2 emissions of the European Union, according to the International Energy Agency (IEA).

To reach net zero by 2050, 90% of the world’s electricity generation should come from renewable sources, with solar and wind power accounting for almost 70%, according to the IEA.

While China is the world’s largest emitter and still heavily reliant on coal, it is also producing huge amounts of renewable energy.

In terms of the energy mix, China and the US are more or less the same. Wind, solar, hydroelectric, geothermal energy, as well as biomass and waste, account for 10% of China’s energy consumption.

The United States was not far behind, with 9%. But nearly half of that comes from biomass, which is energy derived from substances that were recently alive, such as wood from trees, algae, or animal waste. Some experts and scientists argue that it is not always truly renewable.

However, in terms of capacity, China was the world leader in 2020, when it built almost half of all the world’s renewable energy facilities, according to the Renewables 2021 Global Status Report. It almost doubled its capacity since 2019.

China has built large solar and wind farms, producing more solar PV and wind turbines than any other nation. It also has the largest electric vehicle market, with 38.9% of the world’s share of electric vehicle sales, while the United States took 9.9%, according to the renewable energy report.

So what is the verdict?

Looking ahead, US climate plans are more ambitious than China’s: US President Joe Biden has pledged to cut the country’s emissions by at least half by 2030, from 2005 levels, but China is at a different stage of development, so it should be a factor in determining what the country’s fair share of climate action should be. China is also ahead of the United States in renewable energy.

It also remains to be seen how much of the cornerstone of US Democrats’ climate policy can pass to Congress.

China expresses its commitments in terms of “carbon intensity”, allowing more emissions as its GDP increases, making it difficult to compare with that of the United States. It presented its new emissions plan to the UN on Thursday, but achieved only modest improvement.

Climate Action Tracker, which synthesizes countries’ goals, rates US domestic policies as better than China’s, almost on track to contain global warming to 2 degrees Celsius. When adjusted to consider what each country’s fair share would be, they both score ‘very poor’.

In other words, neither country is reducing enough carbon or transitioning to renewables fast enough to limit warming to 1.5 degrees.