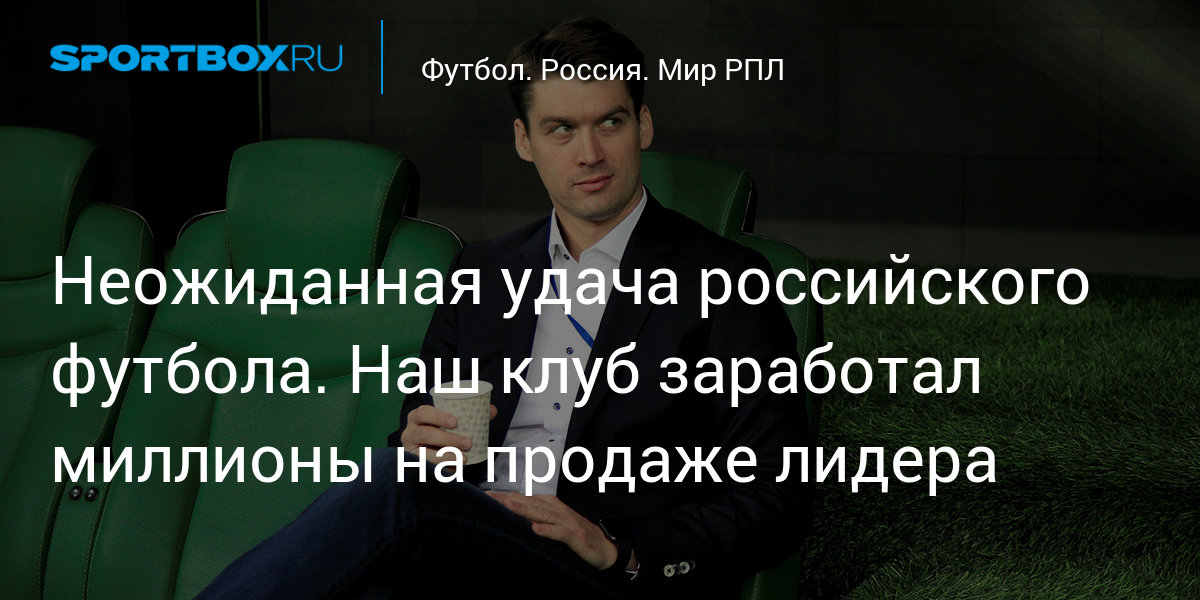 The unexpected success of Russian football. Our club made millions on the sale of the leader

The leadership of Lokomotiv can be applauded.

Russian football is going through hard times. Largely due to the fact that FIFA allowed legionnaires to freely leave the RPL. Our clubs are losing their foreign leaders one by one and don’t even get paid for it.

The financial situation is also difficult for everyone. The more valuable each transfer to the exit, which can be cranked out despite the unfair decision of the world football government. Here you can wholeheartedly applaud the leadership of the Moscow Lokomotiv, which sells one of its players for very cool money.

The most important victory of our football!

Loko bosses have been increasingly ridiculed lately. Still: an ambitious project led by Ralf Rangnick and other Germans lost all its ideological leaders in a year, except for Thomas Zorn, and team play and personnel decisions still raise many questions. However, against this background, the railway workers suddenly managed to pull off the most powerful deal in the current realities.

It looks like Loko will soon part ways with the anti-hero of the last round, Alexis Beka-Beka. Yes, against Rostov, the Frenchman received a stupid removal, but in general he was good and regularly demonstrated his high potential. This potential was appreciated in the homeland of Beka-Bek. Alexis is set to sign for Nice, who have already shown interest in the midfielder last summer.

For Loko, this will certainly be a loss. For all his temper, Beka-Beka played an important role in advancing the team’s attacks. At the beginning of this season, he began to really open up in the box-to-box position and more than once made dangerous passes into someone else’s penalty area due to dribbling. Dmitry Barinov will miss such a creative partner in midfield. The rest of Loko’s defensive midfielders are more focused on destruction.

Is the system working?

However, the railroad workers will have something to console themselves with. They will not lose Bek-Bek just like that. On the contrary, Loko will make great money on the transfer. Rangnick’s system works!

See also  Gündogan: Kimmich will be vaccinated in the future

Cherkizovsky bosses deserve praise. The fact is that they included a special clause in the Beck-Beck contract prohibiting him from suspending the agreement. Alexis can leave Loko only for money – and the Russian club will receive huge compensation from Nice.

According to Match TV, Lokomotiv will earn 12 million euros plus 2 million bonuses, and another 5% of the subsequent sale. Thus, Beka-Beka could become the third most expensive transfer in the history of the club after Umar Nyass (18 million) and Alexei Miranchuk (14.5 million). Even under normal circumstances, such an amount could be classified as large, and today it is a triumph!

It seems that in the near future, Loko will have a complete order with sales. Not this summer, but next, the club will certainly be able to successfully part with Wilson Isidore, who quickly became the leader of attacks in Cherkizovo. Barinov’s departure abroad, in which Valencia is actively interested, is not excluded. Another question is that the system that Rangnik promised to the fans is based not only on sales, but also on purchases. And it is becoming increasingly difficult to acquire promising football players from abroad …